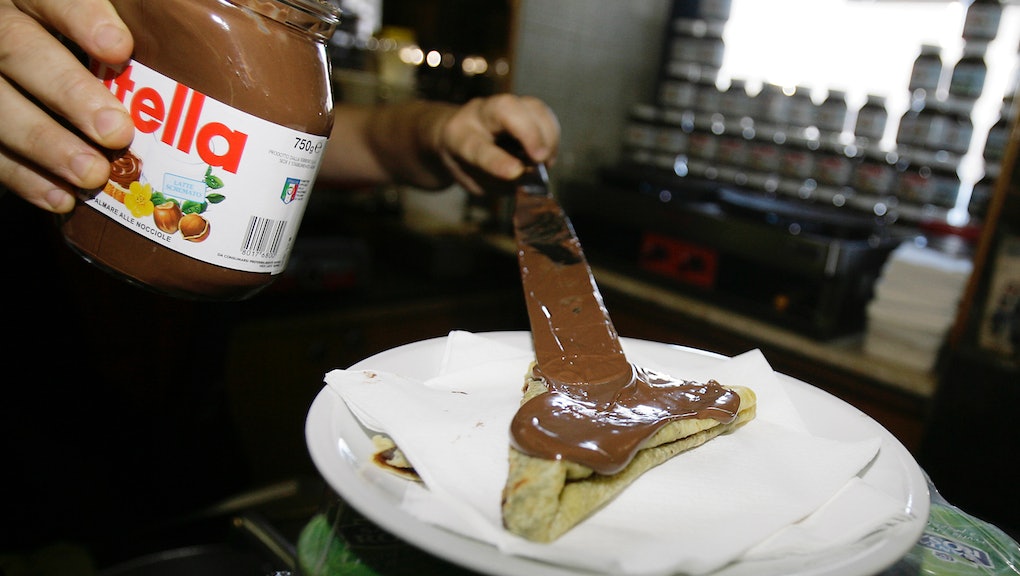 The Surprising Backstory of How Nutella Was Born

We owe a lot of our everyday modern conveniences to inventions from World War II: radar, penicillin, computers, and even nutella.

True fact: In the 1940s Pietro Ferrero was a pastry-maker in the Piedmont region of Italy, and rationing was putting a squeeze on everyone's supply of cocoa. Hazelnuts are a big feature of the Piedmontese economy, and Ferrero probably knew about gianduia, a kind of chocolate spread invented in nearby Turin during the Napoleonic Era.

The product that would eventually become Nutella didn't start off as the creamy, eat-it-by-the-spoonful indulgence we know today. In 1946 it was a solid loaf sold as Pasta Gianduja that stretched the chocolate ration by mixing it with ground hazelnuts.

We'd recognize it by 1951, when Supercrema Gianduja came on the market. That's a mouthful even for Italians, though, and in 1964 the world's greatest nut spread was renamed Nutella.

Fifty years later it's still a runaway hit, inspiring hundreds of recipes from cakes and cookies to face masks (Nutella facials not always advised). Sometimes we even try to make our own, but mostly we're not that patient: Worldwide, we buy 2.5 jars every second.

The Ferrero Group, which also makes Kinder Surprise and Tic Tacs, tries to pay its success forward. The company has won accolades for its efforts to sustainably source its ingredients and commits itself to transparent social responsibility.

That didn't deter a group of U.S. moms who believed Nutella's health benefits had been oversold: In April 2012 the company paid out a $3 million class-action lawsuit settlement. Anyone who had purchased a jar between January 2008 and February 2012 could apply to receive up to $20, or five jars' worth of reimbursement. (That works out to about one jar a year; frankly I don't know who has that kind of self-restraint, but more power to them if they’re out there.)

Nutella officially turns 50 on May 18, which is a great excuse to celebrate if you managed to miss World Nutella Day on Feb. 5. Whether you're enjoying it on toast, in cookies or straight from the jar, remember to be grateful we live in a world in which Pietro Ferrero thought outside the block.