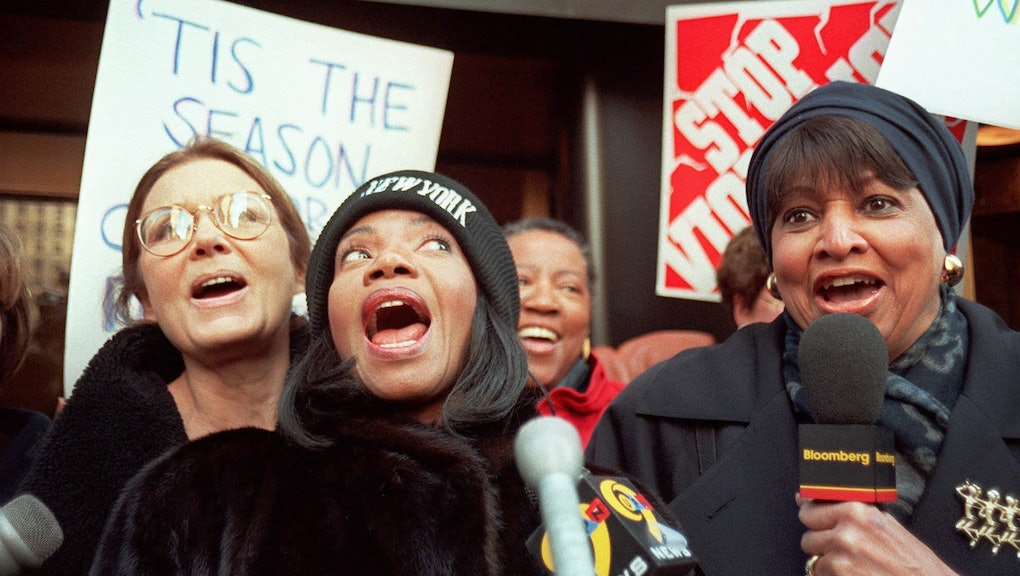 It's hard to find the right words to describe someone of Gloria Steinem's stature. To many, she's the timeless and inspiring face of the golden age of grassroots feminist activism who has fully devoted herself to a cause that benefits women all over the world. In her mind? Well she's still just the "fat brunette from Toledo, and [...] always will be.

It's hard to believe the tireless women's rights advocate is turning 80 years old on Tuesday, mostly because she doesn't look (or act) like she's a day over the age of 40. A look at her political past shows that the last five decades have been spent productively at the forefront of the fight for gender equality. Unfortunately, many of the battles she thought would be won are still being fought today. Let's take a look at some of the most iconic phrases she uttered years ago, that still ring true today, to celebrate the feminist hero in all her strength, poise and glory.

1. "The truth will set you free, but first it will piss you off."

2. "Law and justice are not always the same. When they aren't, destroying the law may be the first step toward changing it."

4. “Women have two choices: Either she's a feminist or a masochist.”

5. "We'll never solve the feminization of power until we solve the masculinity of wealth."

6. "Power can be taken, but not given. The process of the taking is empowerment in itself."

8. "The future depends entirely on what each of us does every day; a movement is only people moving."

9. "America is an enormous frosted cupcake in the middle of millions of starving people."

10. "Women are not going to be equal outside the home until men are equal in it."

11. “Feminism has never been about getting a job for one woman. It's about making life more fair for women everywhere. It's not about a piece of the existing pie; there are too many of us for that. It's about baking a new pie.”

12. "We've begun to raise daughters more like sons ... but few have the courage to raise our sons more like our daughters."

13. "Any woman who chooses to behave like a full human being should be warned that the armies of the status quo will treat her as something of a dirty joke ... She will need her sisterhood."

15. "We need to remember across generations that there is as much to learn as there is to teach."

16. "Once we give up searching for approval we often find it easier to earn respect."

17. "The first resistance to social change is to say it's not necessary."

18. "A feminist is anyone who recognizes the equality and full humanity of women and men."

19. "Women may be the one group that grows more radical with age."