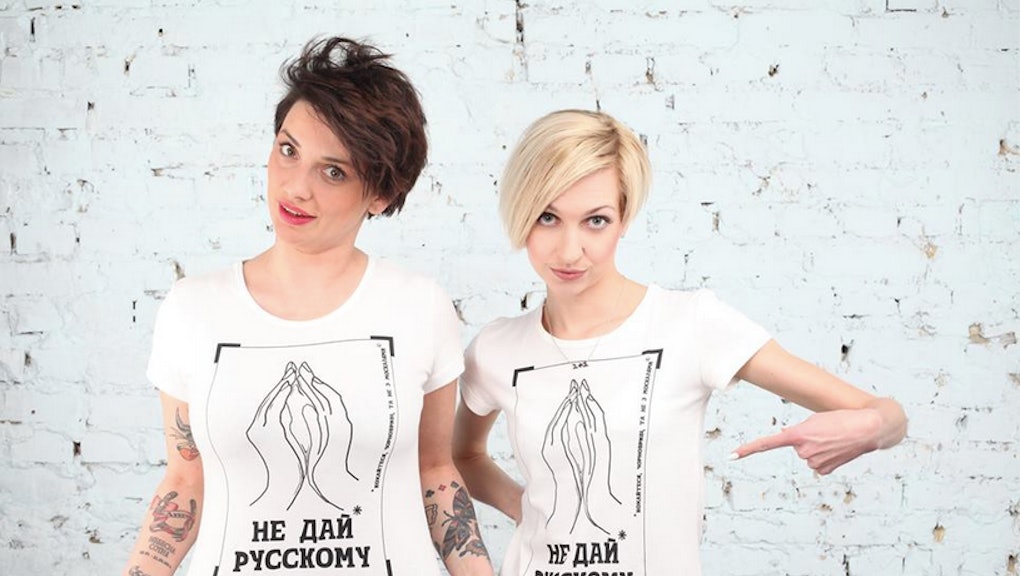 Aristophanes' comedy Lysistrata goes like this: frustrated by the never-ending Peloponnesian War, women of different Greek city-states band together to deny sex to men until they negotiate for peace. Although the men try to resist, they are ultimately defeated by the sex strike and bring an end to war.

In Ukraine, a group of young women are now taking a page out of the Greek's playbook to similarly assert their independence over Russian men — to mixed results.

On their Facebook page, the campaign is selling T-shirts with their slogan that roughly translates to "Do not let Russian," or "Don't give it to a Russian." While the group does not mention how many shirts it has sold so far, it does say that proceeds will be donated to the Ukrainian army.

"We believe that in the context of military occupation of the territory it is silly to continue to assert that all men are brothers," campaign co-founder Katerina Venzhik told Foreign Policy. "What Russia is doing in Ukraine is terrible, but the world sees their actions primarily through the prism of the pro-Putin propaganda."

Backlash: While the campaign is still taking off in Ukraine, it has already gone viral in Russian media, but maybe not how it was intended. Internet commenters — especially male ones — have been quick to denounce these women as "prostitutes," — yeah, they've really missed the point.

There have been other successful sex strikes in recent history, from Liberia and Colombia to Kenya and the Philippines. But a campaign like this is only successful if a significant portion of the female population participates, and if women on both sides of a conflict band together to make a statement to men.

If Russian women decided to deny sex to their men in solidarity with Ukrainian women, that would make a powerful statement. But for now, these women are facing the backlash on their own, and it remains to be seen whether they can make inroads where traditional methods of sanctions and diplomacy failed.