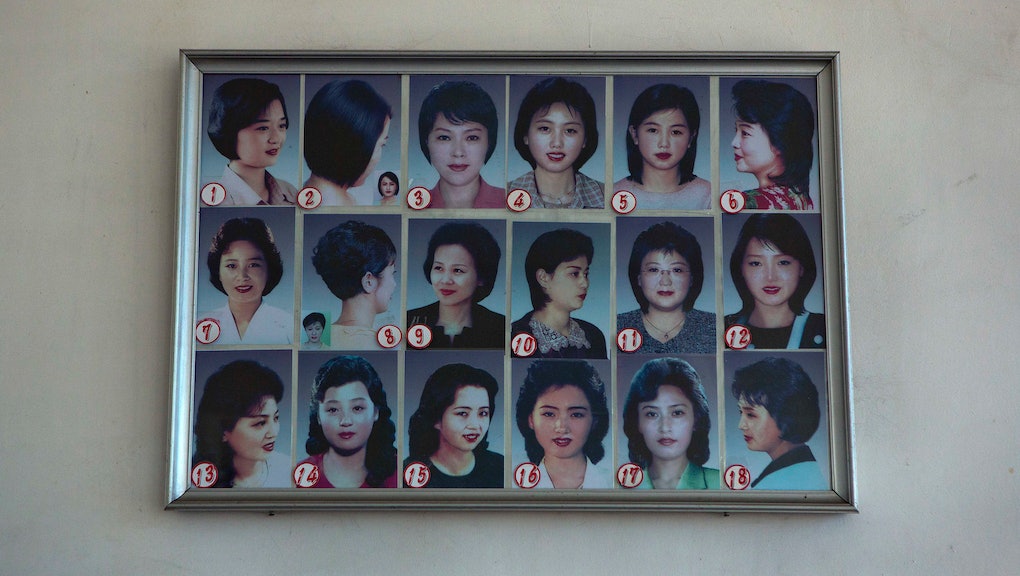 Sometimes a piece of news trickles out from North Korea that seems like it came from a YA dystopia generator. The latest true scenario? Fauxhawks have been banned and the government controls hairstyles.

No, really: The North Korean government has released a guide to the 28 state-sanctioned haircuts. Ladies, you've got even more reasons to get married young now. The unwedded female can choose from short, above-the-shoulder styles, but put a ring on it and you can go wild with curls (with class), length (to a point) and… no, actually, that's pretty much it. But you're allowed 18 variations on a patriotic theme to choose from!

Sorry, fellas, but you've only got 5 cm (about 2 inches) to work with. Shagginess is a threat and a well-known symbol of free-thinking and rebellion, unless you're older, in which case, go wild up to 7 cm (3 inches). Not only that, but short hair is a matter of health. Young men are required to touch up their high'n'tights every 15 days to prevent nutrition from leaching away from their brains. (Apparently past a certain point, men have outlived their usefulness anyway, hence less concern for their neurological nourishment.)

By the way, if you're still not clear on what coifs are kosher, North Korean state TV put together a five-part series on how to maintain hair that's in line with communist values:

In a country where not even the Supreme Leader's family is safe, the politics of hair suddenly aren't so trivial. One news anchor known for Effie Trinkets levels of dictatorship buy-in created something of an uproar as viewers tried to make sense of what it meant when her hairstyle changed twice in two weeks.

North Korea is pretty much a parody of itself, which doesn't cancel out the fact that the people running it are inexplicable and awful. The indignities and horrors Kim Jong-un inflicts on his citizens are real, but to combine the policies that earned the nation a place on the Axis of Evil with state-approved lookbooks is surreal to the point of cartoonishness. Not even Panem goes that far.