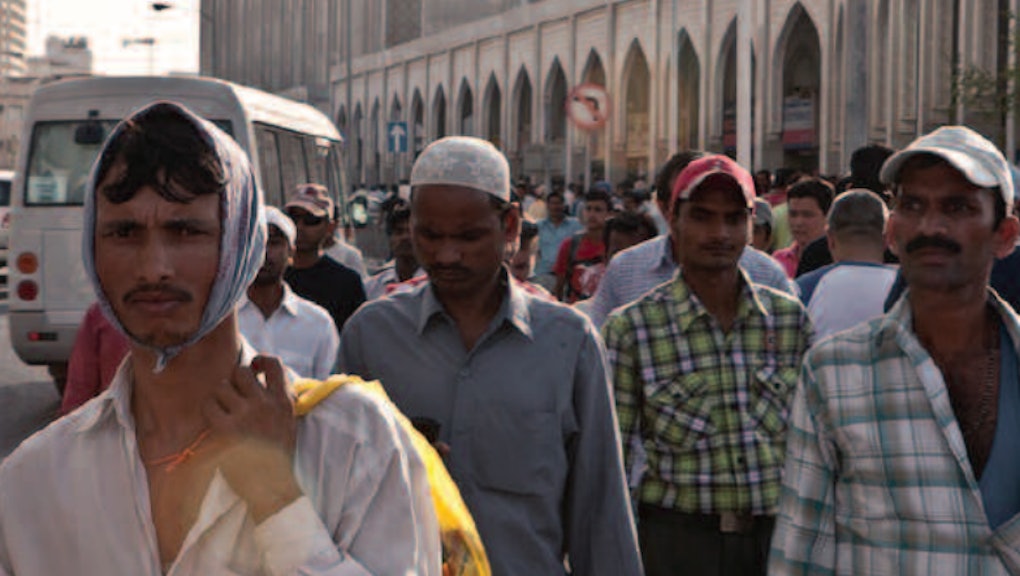 The 2022 World Cup in Qatar is more than eight years away, but the human costs of preparing for the event are already piling up.

Qatar is expect to spend $100 billion on new infrastructure in the lead-up to the World Cup, and it's been importing millions of much-needed migrant workers to do the construction. Most of these workers are from developing regions of South Asia — Nepal, India, Bangladesh, etc. — and they go to Doha in the hopes of a better life. Instead, what they find is akin to "modern-day slavery."

Though the Qatar World Cup committee has denied human rights abuses, emerging reports indicate flagrant disregard for human life. Plus, it's already on track to be the deadliest sporting event in history, taking the title from the previous record-holder: the 2014 Sochi Olympics.

Both Qatar and FIFA have done little to alleviate working conditions for these migrant workers, with the soccer organization going as far as to say it's not really their concern. "This feudal system existed [in Qatar] before the World Cup," FIFA exec Theo Zwanziger said last month. "What do you expect of a football organisation? FIFA is not the lawmaker in Qatar."

But soon after, Zwanziger said that in the future FIFA needs to be more careful with country selection that "there are also plans to monitor financial transactions more closely and set up legal counsels for improving the currently totally unacceptable conditions for guest workers."

While Qatar turns a blind eye to its abusive industry and FIFA is slow to hold the country accountable, more and more workers are losing their lives so tourists can stay at luxurious accommodations in Doha. Here is their story.

It's believed that around 4,000 migrant workers will die by the time the World Cup begins.

Anywhere between 1.7 to 2 million migrant workers are currently in Qatar.

About the half the deaths have been due to heart failure or workplace accidents. Many were working outside in 122 degree heat with no access to drinking water.

Other deaths have resulted from hunger, malnutrition and sickness from the overcrowded, unsanitary living conditions.

Even before these workers leave their countries, they are forced to pay extortionate brokerage fees to agencies that organize the migration. Once they start making money, they are essentially indentured servants to these agencies in order to pay back their loans.

The workers are then forced into the kafala system, where employers can confiscate their passports and force them to live in horrible conditions. If they complain or try to run away, employers can revoke their visas and make them illegal — making it impossible to return home.

According to Amnesty International, 90% of migrant workers have their passports taken away. Over 50% don't have health cards to access government hospitals and 21% don't receive their pay on time.

And according to Human Rights Watch, "The sponsorship law prohibits migrant workers from changing jobs without their employer's consent; even when employers fail to pay competitive wages, provide decent conditions, or meet the conditions of the employment contract, workers cannot simply change jobs."

Ganesh Bishwakarma, 16, died of a cardiac arrest two months after leaving Nepal for Qatar. His family now has to pay back the debt he incurred at his job agency.

Around 30 migrant workers have taken refuge at the Nepali embassy in Doha to escape their employers.

Most migrant workers only get one day off per week, on Fridays.

But even then, they's barely able to relax; many public places in downtown Doha ban them from entering due to their appearance.