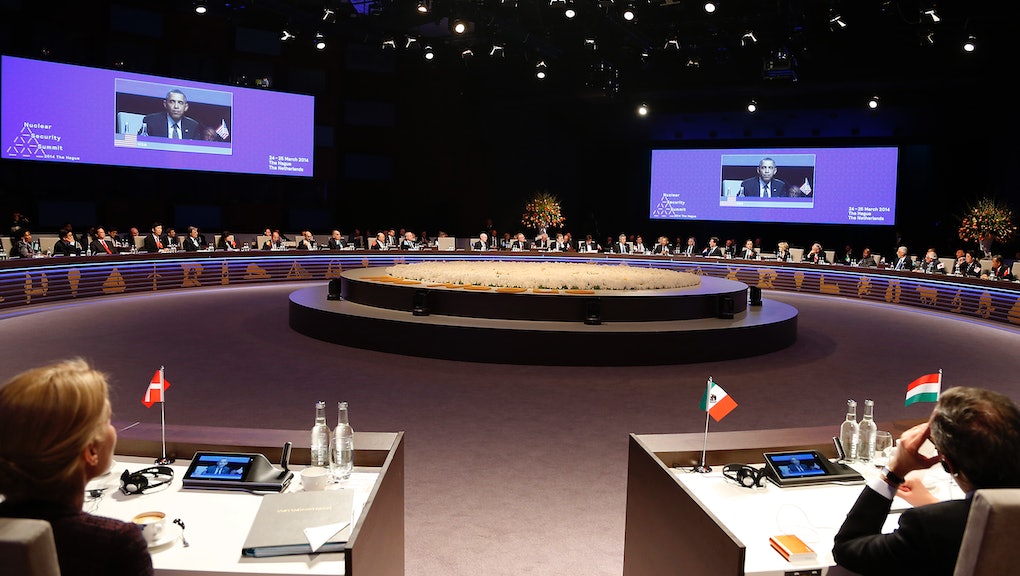 Ladies, you haven't been barred from serving lunch at the Nuclear Security Summit because of misogyny. It's just about aesthetics.

While world leaders in The Hague this week enjoy a nice meal and discuss ways to combat nuclear terrorism, they need no distractions, according to the catering company staffing the conference. That's why only men over the age of 25 are working the room. "If 20 gentlemen are serving and three platinum blonde ladies," said catering director Hans van der Linde, "then that spoils the image."

Look, women, it's just how it is! Your pretty, conspicuous ways as you wheel carts between tables and offer the chicken plate or the vegetarian option would prevent you from exhibiting the reserve that true professionals require. Obviously even dressing the staff in matching neutral uniforms would be too much for these high-level diplomats to handle. Do you really want to be responsible for preventing the summit from solving the threat of nuclear terrorism?

Not only that, but it's just plain culturally insensitive to ask men (apparently all under consideration are men) to let women serve them. Jean-Paul Weijers, director of the Protocolbureau that supports the summit, said they were taking into consideration the preferences of leaders from the Muslim world. "They understand that in the West there are different standards," he said, "but The Netherlands is a small country that is used to adapting quickly to bigger countries."

No word on whether these leaders give a damn who brings them lunch, or whether it was somehow beyond the catering company to deploy the "appropriate" gender to the appropriate table.

The summit organizers have pretty much washed their hands of this, especially after a social media outcry slammed the decision as "un-Dutch." According to a spokeswoman, their only request was that the serving staff appear "uniform." Apparently that means only all male or all female servers, though with a little imagination, surely "uniform" could apply to other aesthetic features, if desired.

Maybe the women employed at van der Linde's company dodged a bullet. Apparently his original concept for an all-female serving staff involved "little Delft Blue dresses," though he acknowledged that perhaps such an outfit would be impractical, given the need to climb steep sets of stairs.

Phwew. I almost thought van der Linde couldn't see what was wrong about this whole ordeal. Glad this really isn't about misogyny after all.