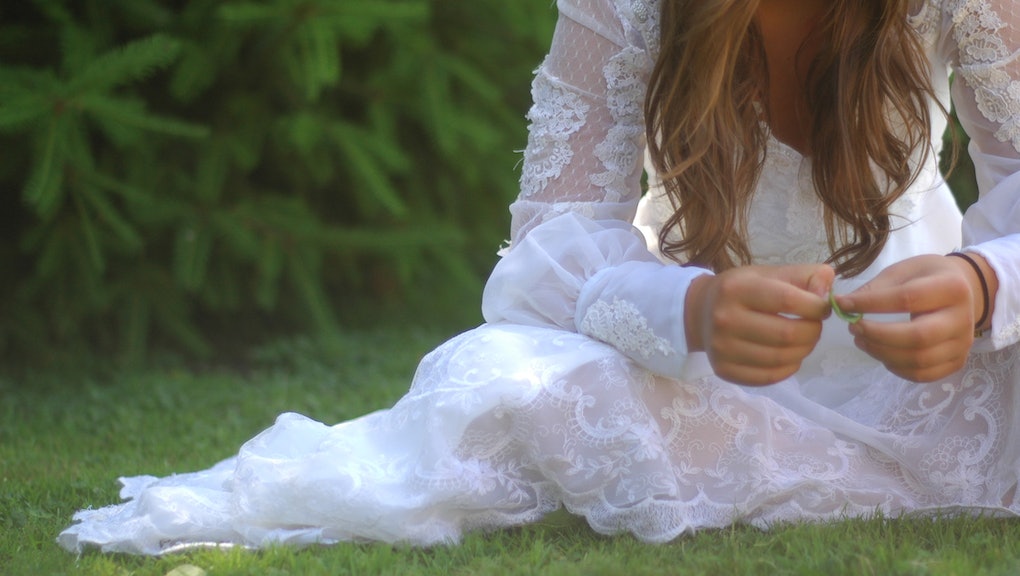 "At this point, you're married to the Lord, and your father is your boyfriend."

So says Pastor Ron Johnson to his 12-year-old daughter Caroline, before placing a ring on her left finger. Johnson and his family are the subject of a recent Nightline Prime investigation of Purity Balls, a "full-fledged national phenomenon" that has reportedly spread across 48 states and 17 countries. Despite the thought that first popped into my head, these balls are not some ironic term for Ben Wa sex toys, but rather formal father-daughter dances during which young girls pledge to abstain from all sexual activity until marriage (this includes kissing and dating). They also symbolically entrust their fathers — the "high priest" of the home — with their maidenheads for safekeeping.

The special was filmed back in October 2013, when Nightline reporters headed to the 14th annual "Super Bowl of Purity" (only in America, folks) to document the chaste event. As the cameras rolled, 60 father-daughter couples arrived at the Grand Ballroom of Colorado's Broadmoor Hotel to "celebrate the beauty of [their] daughters and the glory of their fathers."

Creeped out yet? You should be. Purity Balls might seem like a quirky, inoffensive ritual of uber-religious middle America, but they're emblematic of some very messed up attitudes about women and their sexuality that have serious implications beyond these communities.

Purity Balls stem from purity pledges, a practice that developed in the late '80s and early '90s in response to increased sexual liberation, the AIDS epidemic and rising rates of STDs and teen pregnancy. In 1998, five years after the Southern Baptist group True Love Waits popularized the first purity pledge cards, Randy Wilson and his wife Lisa held the inaugural Purity Ball.

Wilson is not a minister, but he is very concerned with young women's sexuality. As the father of five daughters, he started the balls in an effort to control what he deems a tumultuous transition from "girlhood to womanhood."

"What I hear from these young ladies is that there's this need for that physical touch, and from a male being," he tells Nightline. "I believe that's what the father's role is."

Girls typically take the purity pledge at the balls around age 12 or 13, not coincidentally around the same time they start getting their periods; however, young women of all ages can attend. The ceremony itself is rife with symbolism — some of it intentional, like when ballerinas clad in virginal white carry a large wooden cross to the middle of the dance floor:

And some of it not, like when two men then stand before the cross, each holding out a sword:

After fathers and daughters walk beneath these crossed swords, daughters lay white roses at the cross to silently commit to living "pure lives before God." Then everybody foxtrots.

When you get down to it, Purity Balls are literally all about sex. If your worth as a human being is invariably tied to what you do with the parts between your legs, who you are becomes defined by your sexuality; you're either pure, or impure. Madonna, or a whore. As Jessica Valenti puts it in The Purity Myth:

"What's the difference between venerating women for being fuckable and putting them on a purity pedestal? In both cases, women's worth is contingent upon their ability to please men and to shape their sexual identities around what men want."

Let's be clear: What consenting adults do (or don't do) between the sheets isn't anyone else's business, and there's nothing wrong with a personal decision to practice abstinence. But that's not what this is.

In giving fathers (and by extension, future husbands) dominion over their daughters' virginity, Purity Balls both commodify female sexuality and completely rob women of sexual autonomy, instead granting power to men who, if Wilson's comments about "male beings" are any indication, have very little understanding of what it actually feels like to be a young woman.

And since purity pledges and abstinence-only education have both repeatedly been shown to be ultimately ineffective in preventing teens from having sex, what happens to those who inevitably slip, having been taught that their entire moral value is so contingent upon their sex lives (or lack thereof)?

Seventeen-year-old Katie Johnson, another of Pastor Johnson's daughters, has worn a purity ring for four years. She recognizes the difficulty of her chosen lifestyle, saying she would probably "give up" without the support of her church-going friends. But there are plenty out there who may not have such a supportive group, or who may give up in spite of it (and understandably so, since fighting against the biological impetus to use what God gave you isn't easy). Even if the community welcomes them back pending repentance, multiple studies have shown that teens who vow abstinence are less likely to use contraception than their peers, making them vulnerable to unwanted pregnancies and STIs.

Even worse, fostering a sense of dirtiness and shame surrounding sex can prohibit the reporting of sexual assault, as well as the healing process. Not to mention the fact that these balls completely ignore the existence of homosexuality, and that a universal definition of virginity arguably doesn't even exist in the first place.

At the end of her Purity Ball, Caroline Johnson looks ecstatic. "I felt like a princess with my dad," she says, revealing a mouth full of braces as she grins at the camera. "This is the moment I've been waiting for, to get my purity ring." Other Purity Ball attendees have expressed similar sentiments, asserting that the event and pledge are a way to encourage invaluable bonding between fathers and daughters.

That doesn't change the fact that sex does not define who you are, whether you're having a lot of it or none at all. Your daddy does not own your virginity, and neither does your husband. You do. This is just misogyny, dressed in white and foxtrotting around a cross.