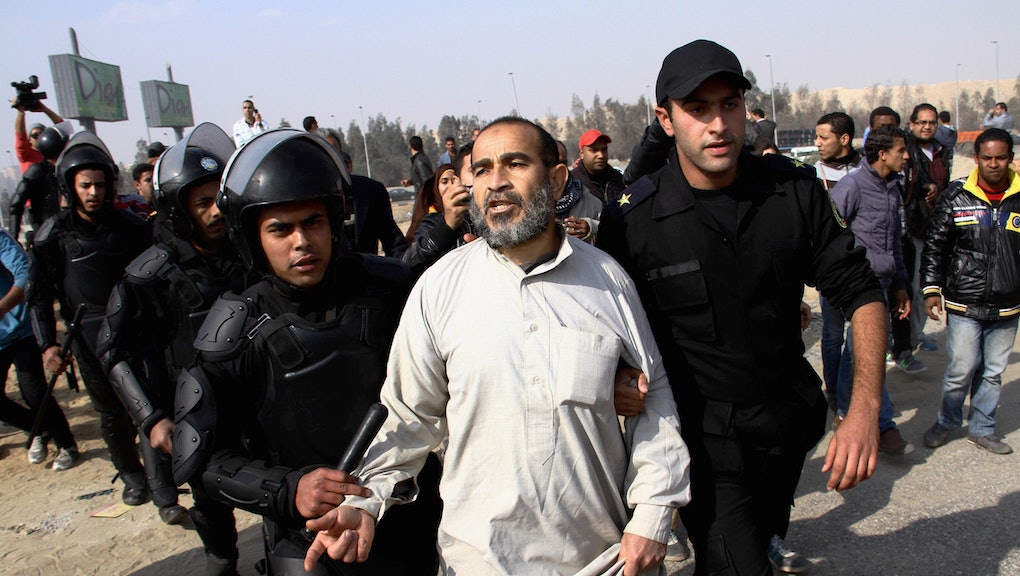 Egypt has shocked the world once again after a judge in the city of Minya sentenced 529 defendants to death. In a move unprecendented in modern Egyptian history, the country's military-backed government has taken its unending war on dissent to the next level.

The defendants were convicted of killing one police officer, and attempting to kill two others during an attack on a police station last August. The decision came after a two-day trial in which lawyers were unable to defend their clients in a court of law.

The country's military regime, led by Abdel-Fattah Al-Sissi, paints a dark picture of Egypt. The country's revolution, and the popular protests that shook it free from Hosni Mubarak's authoritarian regime, now seem like distant memories.

So how did we get here? Here's a handy breakdown of what just happened in Egypt.

So, what led up to the convictions?

The attack came in response to the Egyptian government's violent dispersals of the two major pro-Morsi sit-ins in Cairo. Participants at the sit-ins were protesting the Egyptian military's removal of Egypt's first-ever democratically elected president, the Muslim Brotherhood's Mohammad Morsi, which occurred following mass protests against his rule. To much international condemnation, Egyptian security forces killed hundreds of people when clearing out the sit-ins. In addition to violence, Morsi's supporters have faced incarceration. The Associated Press recently reported that some 16,000 Islamists have been jailed since last summer.

How have Egyptians responded to the verdict?

Many Egyptians, encouraged by their government, now consider the Muslim Brotherhood a terrorist organization. Several terrorist attacks have rocked Cairo and Sinai. A recent game-changing attack targeted civilians, including tourists, instead of Egypt's security apparatus. The Muslim Brotherhood has condemned the attacks, and other groups, notably Sinai-based Ansar Beyt Al-Maqdis, have claimed responsibility. But in popular discourse, it is the brotherhood that should be blamed. There have been armed Morsi supporters and those involved in brootherhood-incited political violence, like that which occurred during the Etihadiya protests against Morsi's executive powers decree. This has contributed to the us-versus-them binary prevalent in Egypt.

Support for the convictions can be found on the street. In a New York Times video, one Cairo resident praises the verdict's swiftness. "[T]his is something new to us, when you have a big case decided so quickly," the man said. "So we are very happy about this."

A Twitter hashtag that translates to "I support the execution verdict for the terrorists" has been used to express views like, "Until the end of the Brothers in Egypt, so we can live in safety" and "Our dead are in heaven. Their dead are in hell."

Human Rights Watch's Sarah Leah Whitson said, "The Minya court failed to carry out its most fundamental duty to assess the individual guilt of each defendant, violating the most basic fair trial right." Amnesty International's statement reads, "Today's mass death sentences handed down by an Egyptian court are a grotesque example of the shortcomings and the selective nature of Egypt's justice system."

UN human rights spokesman Rupert Colville said, "The mass imposition of the death penalty after a trial rife with procedural irregularities is in breach of international human rights law."

Egypt's military government has been the target of international condemnation on several occasions since Morsi's ouster. It has shown no remorse for its actions, and has not attempted to redress past excesses or alter its behavior.

Why Egypt cracking down on the Muslim Brotherhood?

Image Credit: APThe Muslim Brotherhood, founded in Egypt in 1928, has faced suppression – and sometimes violence – for much of its existence. The group has managed to thrive, and eventually former Egyptian president Hosni Mubarak gave the Islamist group some room in the political arena, and soon members became part of the government.

The group grew its supporter base through its social programs. Following Mubarak's ouster in 2011, the Brotherhood was officially recognized as a part of the new government. Members won almost half of the parliamentary seats, and one of their members won the presidency.

After an arguably unsuccessful year in power, mass protests against Morsi on June 30 eventually turned into a coup, and the Islamist president was arrested by Egypt's military.

Today, the group is considered a terrorist organization in several countries, including Egypt.

The BBC has created a helpful video explaining Egypt's history of suppressing the group:

Why are these convictions such a big deal?

Most of those convicted were tried in abstentia, so the convicts may spend the rest of their lives in hiding. Also, the verdict needs to be approved by Egypt's grand mufti. If the verdict stands, lawyers are expected to appeal. So it is unclear if Egypt will go down in history as being that country that executed hundreds of its citizens after a sham trial. Nonetheless, the verdict is part of a descent into authoritarianism that arguably outdoes the days of Mubarak. Since Morsi's ouster, Egypt's government has created a state in which dissent is simply not permitted. Journalists and political activists (of the liberal as well as religious conservative bent) are killed and jailed.

The only real political threat to Egypt's "deep state" establishment of Mubarak-era elites and the all-powerful military has been the Muslim Brotherhood, an organization that once dominated Egypt's post-Mubarak parliament but is now deemed an illegal terrorist organization. The combination of death sentences given to 529 Egyptians without due legal process and the an increasing culture of distrust among Egyptians has led Egypt to becoming a mirror of the worst human rights offenders of the communist block and would-be socialist states like Qaddafi's Libya, save for any real or rhetorical concern for the country's downtrodden. This should be of concern to everyone.