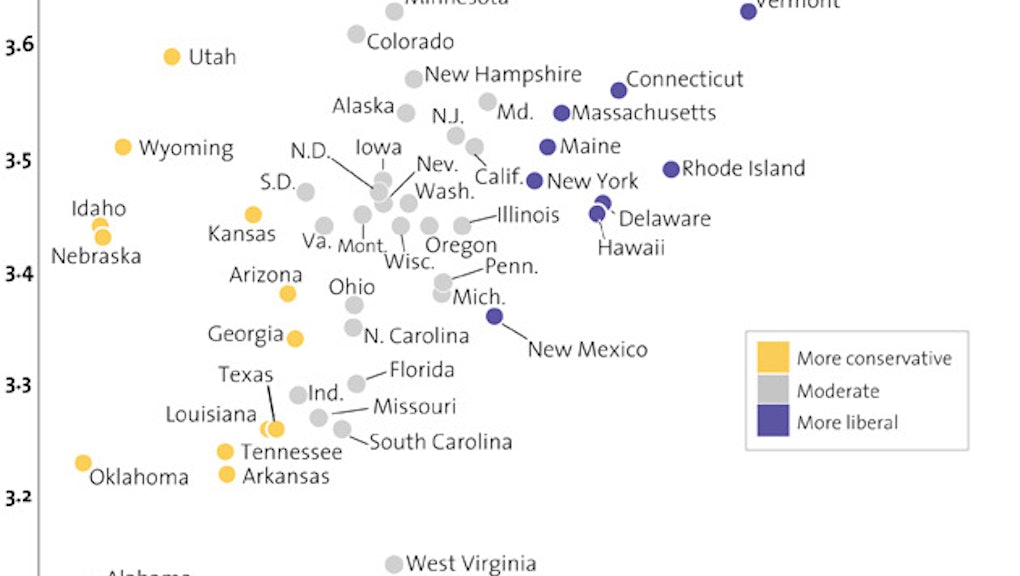 Can You Guess Which Political Party Is Healthiest?

A new study suggests that living in a liberal state is pretty damn good for your health — and living where people are conservative is highly correlated with the opposite.

By comparing state legislators' dominant ideologies and citizens' self-reported health, political scientist Mitchel Herian of the University of Nebraska-Lincoln and colleagues have concluded that "the presence of a more liberal government is related to a higher rate of reported health, a lower rate of reported smoking, lower BMI, and fewer numbers of days with poor health."

The health data comes from the Centers for Disease Control and Prevention's 2010 Behavioral Risk Factor Surveillance System, which sampled over 450,000 people across the United States. To figure out how conservative a state was, the researchers utilized an index that ranked a state's political leanings according to numerous variables such as partisan split of the state legislature and how conservative and liberal interest groups rated the state's congressmen.

Herian's hypothesis was that Democratic or liberal states actively do more to bolster the well-being of their populations, directly by spending more on health care programs and indirectly by backing social safety nets to help people from slipping into extreme poverty, which often affect net positive health. Herian claims that "We're definitely talking about the election of Democrats leading to better health outcomes because they adopt policies designed to lead to the better well being of individuals." The study controlled for levels of education and income, meaning that the correlation isn't directly related to the relative wealth of each state.

As Mother Jones' Chris Mooney notes, there's a silver lining for some states: charity. Herian admits that "in places of higher levels of trust, there might be more voluntary organizations, religious organizations, that are designed to improve the health and well being of people." This conclusion is also supported by the study's finding that states with high levels of "social capital" (trusting your neighbor, etc.) also perform better on health rankings. The theory goes that institutions like the church can step in to assist the ill when the health infrastructure simply isn't there in the first place.

But the effect seems compensatory; relying on the good will of others isn't a substitute for good health care planning and robust investment in adequate access to medical care. As Mooney writes:

"Utah and Wyoming are two conservative states that do quite well on health measures, and they have very high levels of social capital or trust. By contrast, states like Mississippi and Kentucky have low social trust and high conservatism, and poor health outcomes."