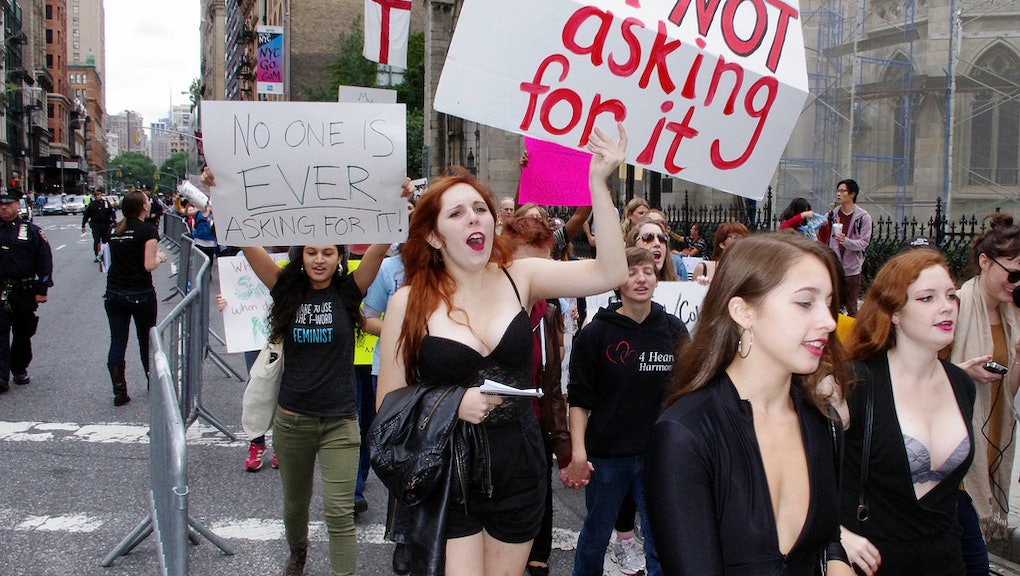 #RapeCultureIsWhen Is the Perfect Answer to Everyone Who Denies Rape

There's nothing like calling a group of women hysterical to undermine their argument.

Caroline Kitchens, a research assistant at the right-wing think tank American Enterprise Institute, trotted out the old "feminists be crazy" trope in a scoffing TIME magazine piece that argued the prevalence of sexual assault in our society has to do with cultural norms, popularly known as "rape culture."

Though rape is certainly a serious problem, there's no evidence that it's considered a cultural norm. Twenty-first-century America does not have a rape culture; what we have is an out-of-control lobby leading the public and our educational and political leaders down the wrong path. Rape culture theory is doing little to help victims, but its power to poison the minds of young women and lead to hostile environments for innocent males is immense.

Ah yes, because the real collateral damage of sexual assault are "innocent males."

These articles always seem to start the same way. As Noam Chomsky once pointed out for Z Magazine, old media types from the institutional bodies like American Enterprise Institute tend to regurgitate the same ideas with a reliability that is equally impressive and infuriating. While assuring the public that rape is a terrible crime, writers like Caroline Kitchens and Heather McDonald of right-wing think tank The Manhattan Institute try to claim that feminists have blown this whole rape culture thing way out of proportion.

Apparently, many women disagree. On Tuesday there were more than 1 million responses on the #RapeCultureIsWhen hashtag started by a frustrated Zerlina Maxwell in response to these right-wing narratives.

The outpouring of frustration from survivors and allies was palpable on Tuesday as the conversation grew. People joining the discussion noted the beliefs that the arguments against rape culture are often based on, known as rape myths.

Funny, these conservative groups believe that we are culturally influenced by young people not getting married, or by a so-called culture war in the United States, or in some cases by the ability of same-sex couples to get married. But apparently that's it as far as influence is concerned. Good to know.

While Kitchens and her ilk may disagree, evidence that rape isn't taken seriously or understood is not hard to find. Think back to Steubenville. The boys who were convicted and the bystanders at the scene didn't even recognize that what they were seeing was rape.

Everyone is affected by rape. Men are raped. Transgender people are raped. Women are raped. The conservative think tanks obfuscate that rape affects the most vulnerable factions of our society because they don't want to admit what feminists have known since the 1950s. We have a real problem here and it isn't feminist discourse. If people opposed to the application of the term "rape culture" repeatedly fail to understand even the most basic realities of sexual violence — and they do — why do we keep giving them platforms to spout their misinformed opinions?