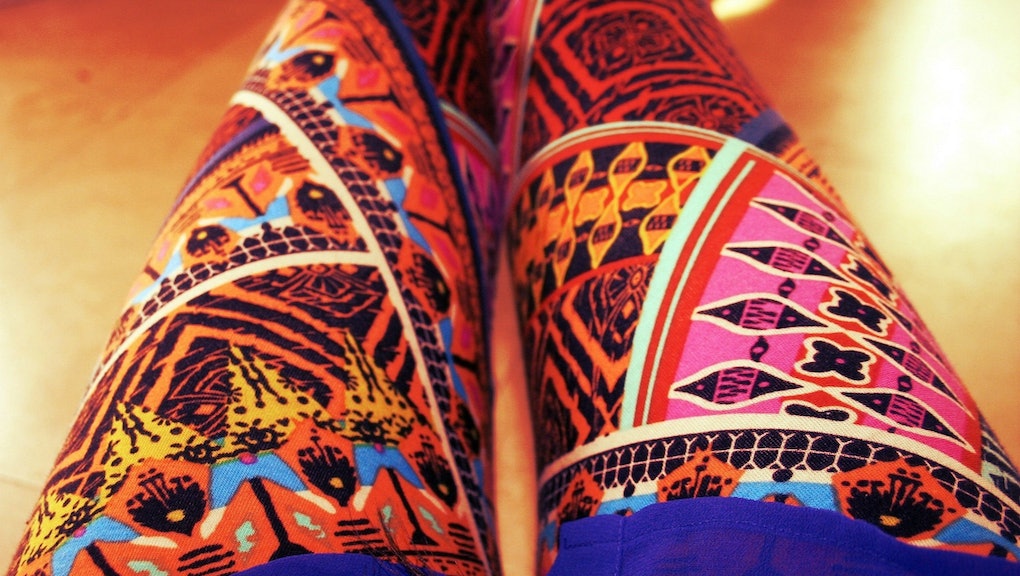 A group of middle school girls is fighting for their right to wear leggings.

Yes, I said leggings. And yes, I said their right.

Students from Haven Middle School in Evanston, Ill., recently told parents that the school had banned girls from wearing leggings and yoga pants because they are "too distracting" to their male classmates. But rather than pack up their spandex, more than 500 students have signed a petition to overthrow the rule, which they rightly deem sexist. Many students also wore the contraband items to school in protest, holding signs with slogans like "Are my pants lowering your test scores?"

This isn't about being fashionable. Regardless of where you fall in the great leggings versus pants debate, girls should never be held accountable for what goes through the minds of boys. Period. Sophie Hasty, a 13-year-old seventh grader at Haven, agrees, saying in the Evanston Review, "Not being able to wear leggings because it's 'too distracting for boys' is giving us the impression we should be guilty for what guys do. We just want to be comfortable!"

Parent Juliet Bond was equally outraged, telling the paper, "At what point do you take girls out of school altogether because boys can't handle it?"

The messaging girls receive matters, especially at a time when their bodies are just starting to develop, and especially from those meant to guide them through their adolescence.

Expecting girls to be the gatekeepers of boys' bad behavior is a slippery slope to placing more serious restrictions on women's bodies, and lets boys off the hook at a time when they should be focusing on how to improve their own actions. As Bond and her husband Kevin wrote in a letter to principal Kathleen Roberson, "This kind of message lands itself squarely on a continuum that blames girls and women for assault by men. It also sends the message to boys that their behaviors are excusable or understandable, given what the girls are wearing. And if the sight of a girl's leg is too much for boys at Haven to handle, then your school has a much bigger problem to deal with."

This isn't the first time a school has made the misguided decision to regulate young women's clothing because it thought boys can't control themselves. One Minnesotan principal told female students to "cover your butts up," and back in January, 16-year-old Marion Mayer posted a scathing letter to her principal on Tumblr following his remarks to female students that "modest is hottest" and "boys will be boys." Mayer told the principal, "You are literally sending the message to young girls, who are already struggling with self-confidence, that hiding their body makes them more attractive. You are establishing a sense of shame in these young, developing minds and bodies."

She's right. Principal Roberson said the school's dress code specifies that "if leggings are worn, a shirt, shorts, or skirt worn over them must be fingertip length," and that this policy is currently being reviewed. But the exact messaging girls receive matters, especially at a time when their bodies are just starting to develop, and especially from those meant to guide them through their adolescence.

Not only do dress codes like this unfairly place the onus on girls to prevent others' deviant thoughts, but they also basically shame girls simply for going through puberty. Bond said that Haven's inconsistent enforcement of the dress code makes girls "embarrassed," because those who are more developed often get singled out. The experience of 12-year-old Lucy Shapiro supports this. She tells the story of when both she and her friend were dressed in athletic shorts, but only Shapiro was "dress-coded."

"I asked, 'Why just me?'," Shapiro says, "and she said it was because I had a different body type than my friend."

It's incredible that this needs to be said so often, but girls are not responsible for how boys choose to behave. Given the inspiring conviction of these middle schoolers, maybe this time the administration will listen.