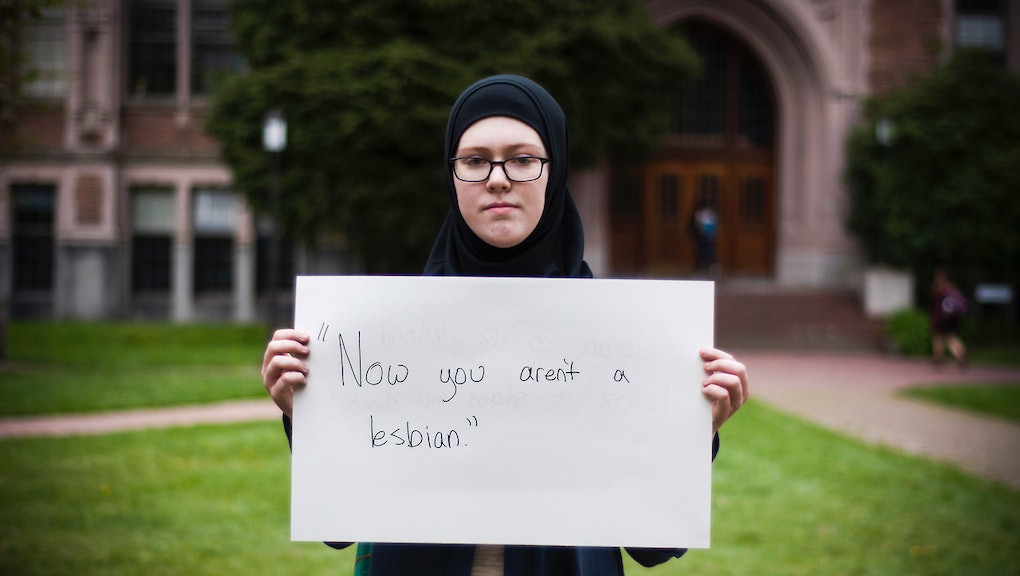 They say a picture speaks a thousand words. Perhaps that's why Grace Brown's photos are so powerful: They've got both the image and the words.

Or perhaps it's because she photographs victims of sexual assault, holding a poster with a quote from their attacker.

Brown has photographed hundreds of survivors and received submissions from thousands more since starting Project Unbreakable in October 2011. Her images document the threatening, demeaning and downright misguided comments that sexual abusers use to torment and subdue their victims.

Some pictures capture a particularly haunting aspect of sexual victimization: so-called "corrective rape," a hate crime used against LGBT people as punishment or in the belief that forcing them to have heterosexual sex will "cure" them of their homosexuality.

Mainstream awareness of corrective rape has increased greatly in the wake of a string of incidents reported in South Africa, a country that does not legally recognize corrective rape as a hate crime. Luleki Sizwe, a South African nonprofit organization, estimates that at least 10 lesbians are raped each week in Cape Town alone. The Triangle Project, another South African charity, reports a similar number — 500 per year — and says that 86% of black lesbians who live in the Western Cape live in fear of being assaulted.

U.S. Vice President Joe Biden nailed it when he said at a March 22 Human Rights Campaign gala: "Corrective rape? What in God's name are we talking about? How can a country that speaks in those terms be remotely considered to be a civil society?"

While the problem is particularly prevalent in South Africa, it's by no means exclusive to that country. Here are seven chilling photographs of American survivors of corrective rape from Project Unbreakable.

As Brown says in the video, "Sexual abuse is shamed and kept quiet." But thanks to Project Unbreakable and similar campaigns, some victims are finally able to take the power back from words that were once used against them.