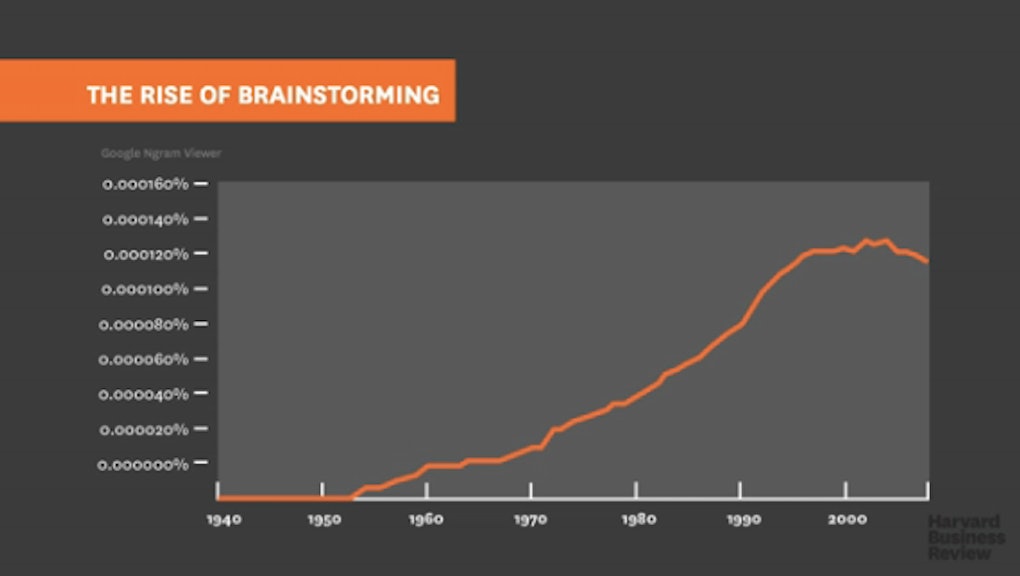 Why Brainstorming Doesn't Work — And What You Should Do Instead

There's a popular myth that getting people together and sharing ideas will boost productivity and lead to innovative solutions. But this old-fashioned way of thinking about groupwork isn't true. Brainstorming doesn't work.

Cognitive psychologist Tony McCaffrey writes in the Harvard Business Review that brainstorming actually makes people less creative than when they work alone, according to studies.

So why is this brainstorming so popular? The collaborative strategy's popularity has been steadily rising since the late 1950s, when the adman Alex Osborn wrote about its supposed ability to maximize ideas per minute in his book Your Creative Power.

Ever since, it has been de rigueur in offices small and large. But the problem with brainstorming sessions is that some people dominate the conversation, leaving the person with the original idea confused. Moreover, only one person can speak at a time in a meeting (and some choose to do so at length), making the sessions utterly inefficient.

So what should be done instead? McCaffrey advises creatives to use "brainswarming" instead. In this strategy, the group writes down their ideas instead of talks about it. The goal is written at the top and the resources you have to achieve that goal is at the bottom.

The people in the group are asked to share their ideas called "interactions" in the space between the goal and resources.

According to McCaffrey, brainswarming can produce 115 ideas per 15 minutes versus 100 ideas per hour in a brainstorm session.

"The conventional wisdom that innovation can be institutionalized or done in a formal group is simply wrong," said trends consultant Debra Kaye at Fast Company.

With the premium that our generation place on authenticity, right now might be the time to change the way group-thinking works. Think about it this way: Forced creativity is like forced bonding.