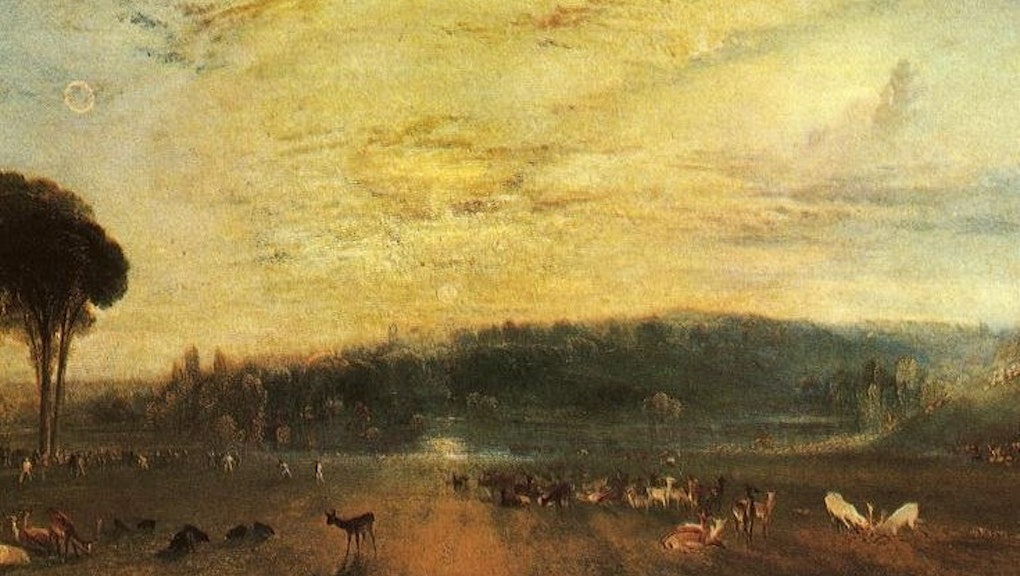 Climate change is a gradual process that takes place over a significant amount of time, and one of skepics' favorite arguments is that there's not enough long-term data to justify the claim. Climate change has really only been documented for the past 150 years or so, with very little data before that.

So a team of Greek and German researchers came up with a rather novel idea: How about extrapolating climate change data from paintings?

The team examined classic paintings "as proxy information for the aerosol optical depth after major volcanic eruptions." The thinking was that after volcanic activity, there would be a lot more particles in the atmosphere. These particles would scatter light and cause more red-orange sunsets, which painters would depict in their art.

Sounds good, but did it work? To test the theory, the researchers first commissioned pieces from Greek painter Panayiotis Tetsis. Unaware of the nature of the study, he was asked to paint before-and-after pictures of Hydra Island, which was affected by an atmosphere-altering dust cloud. His paintings were then compared with photographic documentation of the event:

Both the painting and the photograph on the left recorded significantly redder hues after the dust cloud passed.

Of course, while Tetsis's paintings showed the researchers that they were on the right track, this was still just one isolated incidence of art matching reality. So the team decided to catalogue 124 works of classical art going back to the 1500s.

What they found was a remarkable correlation between recorded volcanic activity and the reddish tint of paintings in the nearby area from that time period. Images of different paintings were processed to see what colors were represented, and a red-to-green ratio was calculated for each painting. And in spite of structural or stylistic differences, paintings from similar time and place had nearly the same to red-to-green ratios after volcanic events.

Check out a few examples below:

Woman In Front of the Setting Sun (1818) by Caspar David Friedrich:

"Nature speaks to the hearts and souls of great artists," said Christos Zerefos, an atmospheric physics professor and a lead author on the study. "But we have found that, when colouring sunsets, it is the way their brains perceive greens and reds that contains important environmental information."

A window to the past: While these paintings won't be able to provide exact figures on air pollution in the 1500s, they can help to corroborate theories derived from other sources. And while they may not have realized it, these painters documented some important information on atmospheric events of their day — data scientists can now piece together to form a more complete understanding of how different weather events may have affected climate change centuries ago.

"We wanted to provide alternative ways of exploiting the environmental information in the past atmosphere in places where, and in centuries when, instrumental measurements were not available," Zerefos said.