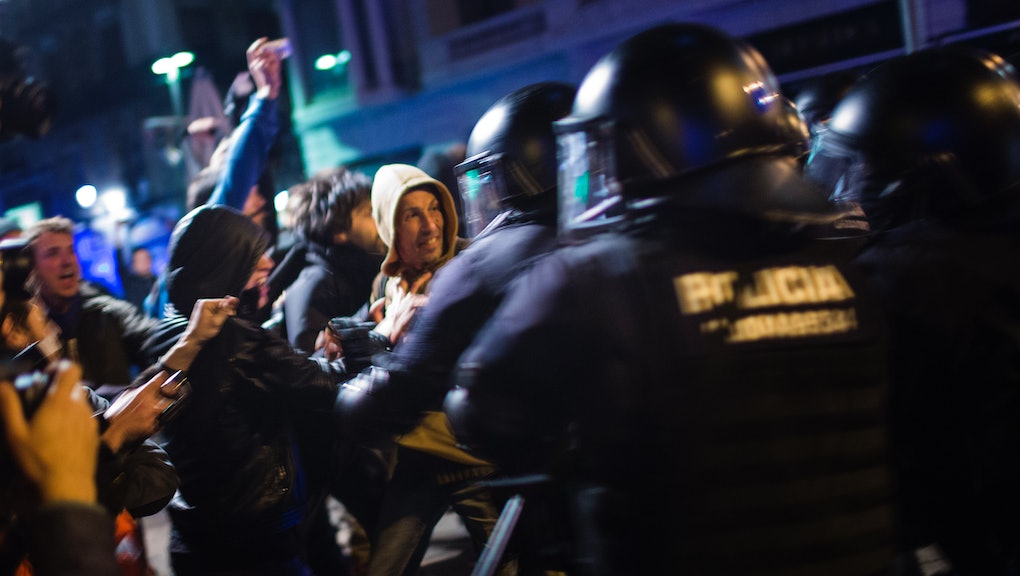 Young People Are Rising Up Around the World, but Not in America — Here's Why

Last weekend, a Maybach limousine pulled up to the Venetian casino and resort in Las Vegas. Out stepped Sheldon Adelson, billionaire Republican donor, for his four-day Republican convention. Donors and politicians, from Chris Christie to Scott Walker and Jeb Bush, shook hands and exchanged promises among the gleaming lights of the most gaudy city in America.

It's a story that we've heard so often it's beaten us into a stupor: wealthy businessmen sliding their arms around our politicians and co-opting the political process. It's not even surprising anymore. But it should be; it should piss us off.

Already long gone are the heady days when thousands gathered in New York City's Zuccotti Park and around the country. The leaves have since settled and in a lot of ways things are back to normal. We have crushing student debt at the tune of $1 trillion, education is unaffordable, there is a lot of work to do but (paradoxically) few jobs and new policies that could help our generation are languishing in Congress. Myopic politicians are more concerned with the next election than doing what's right for our futures.

"Workers of the World, Unite. You have nothing to lose but your chains!"

So ended one of the most revolutionary political documents ever penned. And while the world has seen myriad revolutions — most recently in Latin America, the Middle East and Ukraine — revolutionary activity in Western Europe and the United States has never been sustained. So where is the revolution to enact change and usher our generation into a better tomorrow? Where is the battle cry to secure our future?

Jesse Yeh looks out across the UC Berkeley campus. He does just about anything to avoid debt, using the university's library instead of buying textbooks, scrounging for free food at campus events and occasionally skipping meals. Image Credit: AP

If complaints were kindling, our generation would have a bonfire going. We will likely see slower economic growth, more unemployment and greater inequality than our parents. For all the social progress, retrograde attitudes remain powerful. The government feels more and more an extension of the free market, rather than a bulwark against it. And global warming, still denied by large swaths of the population, threatens not just economic growth, but also ecological collapse. Our current course could cause the earth to warm by as many as six degrees Celsius, which would create millions of refugees, stir up conflict and dramatically increase the incidence of natural disasters.

Why, then, have we not launched a sustained, revolutionary movement to wrest back control and set us on a better course? The most prominent movement, Occupy Wall Street, produced much in the way of slogans. But compared with the Tea Party or the leftist movements of the '40s and '60s, it has done little to change policy.

Here are three reasons we have not seen a revolution, even though it's sorely needed:

One important factor is that economic power increasingly influences the political sphere. A recent Demos report, Stacked Deck, finds that Adelson and his wife gave more money in 2012 to influence elections than the combined contributions of the residents of 12 states.

Research by Larry Bartels finds that individuals with higher socioeconomic status have more influence on legislative outcomes than the poor and middle class. Martin Gilens, Dorian Warren, Jacob Hacker, Paul Pierson and Kay Lehman Schlozman have all recorded similar findings — in politics, money talks. A recent study finds that, sure enough, members of Congress are far more likely to meet with donors than constituents.

When money talks, it doesn't speak for us.

This problem is compounded by the fact that the wealthy don't have the same priorities as the rest of us. Benjamin I. Page, Larry M. Bartels and Jason Seawright find that the very wealthy are far less likely than the general public to believe that "government must see that no one is without food, clothing or shelter," and that "the government in Washington ought to see to it that everyone who wants to work can find a job."

The quintessential example is the minimum wage, which 78% of Americans believe should be "high enough so that no family with a full-time worker falls below official poverty line." However, only 40% of the wealthy agree — and the minimum remains stubbornly below the poverty line.

The wrong narrative has taken hold.

Money also shapes narratives and ideology. Baruch Spinoza, a 17th century Dutch philosopher, argued that "those who believe that a people ... can be induced to live by reason alone ... are dreaming of a fairy tale."

We see the world through our ideology and what's taken hold is the idea that the free market will give us what we deserve and that's fair. But it's not fair. This ideology often does not reflect the interests of the poor, but rather those who shape the narrative: those with money and power. A young economist, also known as Karl Marx, noted in 1848, "The ideas of the ruling class are in every epoch the ruling ideas." If we're not here to help create an equal and fair society, then what the hell are we doing?

To see the power of wealth in shaping perspectives, we can turn to new research by Andrew J. Oswald and Nattavudh Powdthavee. Compared with those who did not win the lottery, the researchers find that lottery winners in the U.K. are more likely to switch their political affiliation to the right after winning and believe that current distributions of wealth are fair. The rich are biased toward believing that the current society is just (called the "just world hypothesis").

To take one example of how much our narratives have changed, it's worth remembering that Americans once believed in high taxes on estates to ensure high levels of opportunity and competition. Americans did not want to live in a Jane Austen society of wealthy and snooty aristocrats and prided itself on the fact that the wealthy had earned their wealth.

Lamenting on the death of this model, Richard Hofstadter wrote, "Once great men created fortunes; today a great system creates fortunate men." The Waltons and Kochs, parasites living off their parent's work rather than creating their own fortunes, are examples of how the old story of the "self-made man" is increasingly out of date. Yet it sticks around because politicians keep repeating it, members of the media keep broadcasting it and suddenly we're all talking as if a tale worthy of Hollywood is somehow fact.

There's another disturbing narrative that's closely linked to the others: economic growth comes from the wealthy ("job creators") and growth is the palliative for inequality. While the former was always dubious, there was a time when economic growth was broadly shared (see chart). However, the '90s and 2000s produced ample growth that accrued largely to the richest members of society. The wealthiest 1% have also accrued 95% of the benefits of the current recovery. These benefits aren't serving the wealthy because they work harder, but rather because they own assets (like stocks) and the Bush tax cuts dramatically increased the returns to such assets. There was a time when the old story that economic growth benefited everyone was true, but it no longer reflects reality.

It's time for a new story.

How we're going to get there.

Sadly, until recently there has been no real resistance to the power of money and false narratives. Democrats and Republicans have generally adhered to a neo-liberal consensus that government is bad and markets are good. It was Bill Clinton, not Ronald Reagan, who declared the "end of big government."

Few politicians are willing to argue that government is good, that the social safety net needs to be expanded, not contracted, and that "freer markets" may not solve our most grievous social ills. Since the rise of "New Democrats," who are happy to shred social security and Medicare in the name of deficits and are unwilling to take a stand on climate change, there has been no real "left" in the country.

Traditional bastions of leftist resistance, like unions, found little support from the Carter and Clinton White House. Regulations in the public interest, like those enacted to prevent another Great Depression or protect the environment, were rolled back with equal fervor by Democratic and Republican administrations. Young people realize this, and Pew Data show we are far more skeptical of the idea that there are major differences between the Republican and Democratic parties.

We are disenchanted with concentrated economic and political power and feel, rightly, that alone, they can do nothing. We find few politicians representing our interests, and almost none outside the grip of economic elites. We are bombarded with false narratives, but have yet to see a new one take hold. This very alienation from the channels of power only makes our movements more ineffectual — we have many Sartres, but few Debses or Naders actually fighting for change.

It's time for a different narrative.

The story we're going to build and spread using the world's greatest communications platform questions the idea that we can have unlimited growth in a finite world. This story will remind us that the engine of economic growth has always been a strong and open middle class. This story will reject racism, xenophobia, sexism and homophobia in favor of an open and tolerant society. This story is a uniquely Millennial story.

We will have to fight to make our story heard. We will have to mobilize to make it happen. We have occupied parks; let us occupy statehouses, campuses and the media. For too long we have, in the words of John Mayer, waited on the world to change. But, as Frederick Douglass noted, "Power concedes nothing without a demand." We cannot simply imagine a better world, we must make it happen.

It begins with a new story.