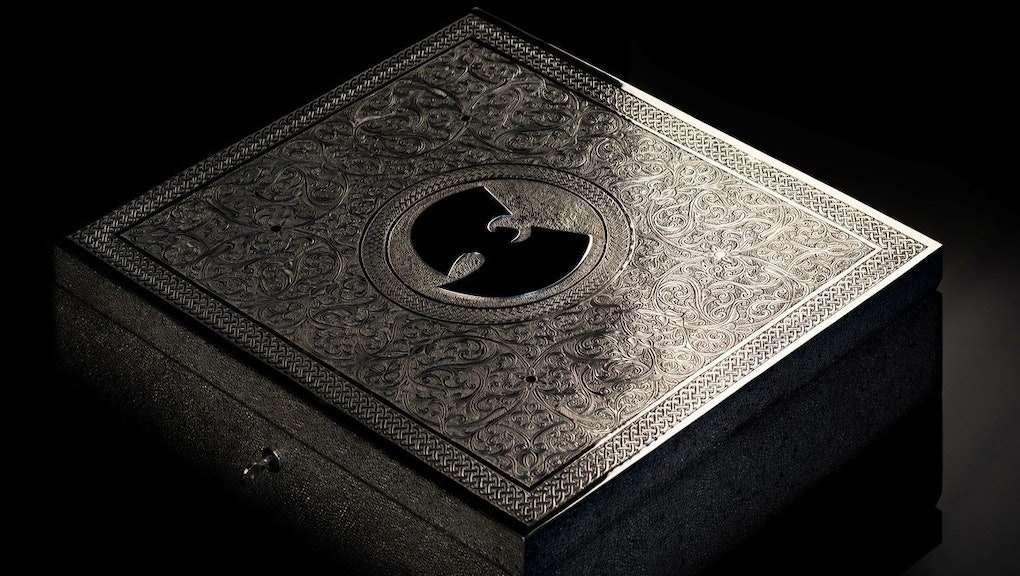 The news: Over the past two years, the legendary rap collective known as the Wu-Tang Clan has been working on an album.

Not A Better Tomorrow, their highly anticipated 20th anniversary collection. But a secret album — a Rubik's cube of musical acrobatics whose dissemination will be as mysterious as its creation.

A few things are known. For starters, the album is titled Once Upon a Time in Shaolin. Second, the Wu has hired British-Moroccan artist Yahya — whose works have been commissioned by "royal families and business leaders around the world," according to Forbes — to build an ornately designed silver box. And third, only one copy of the album will be made.

The copy will be placed in Yahya's box and sent around the world. You will only hear it at designated "listening events" in museums, galleries and festivals, which will charge standard admission fees. At the end of the tour, the album is expected to be purchased for millions of dollars. The buyers can do whatever they want with it, including locking it away forever, never to be heard again.

"This is like somebody having the scepter of an Egyptian king," says RZA, the Clan's producer and de facto leader.

Image Credit: This Is 50

Indeed, it's a unique way to release a piece of music. RZA says the idea came from the group's relationship with Cilvaringz, a music manager they met when he was an 18-year-old student during a European tour in 1997. RZA invited him and a few fans on stage, and the experience stuck with him: "I recognized his energy," RZA says. "There was something about him different from the rest of the audience."

They stayed in touch, and eventually came up with the "single-copy" idea in conjunction. It was influenced by Jay-Z's Samsung album release collaboration last summer, and Nipsey Hustle's 100 $100-mixtapes.

"I know it sounds crazy," says Cilvaringz. "It might totally flop, and we might be completely ridiculed. But the essence and core of our ideas is to inspire creation and originality and debate, and save the music album from dying."

RZA also thinks Once Upon a Time in Shaolin holds broader implications for the musical landscape. "The idea that music is art has been something we advocated for years," he says. "And yet it doesn’t receive the same treatment as art in the sense of the value of what it is, especially nowadays when it's been devalued and diminished to almost the point that it has to be given away for free."

In this way, the album is responding to seismic shifts in music industry business practices over the last decade or so. Online piracy has hurt profits, and labels and artists have had to think of new and innovative ways to release their product — even if that means giving it away.

Wu-Tang is going the opposite route with Once Upon a Time in Shaolin. The importance and mystery with which they've imbued it raises its market value to unprecedented levels for a new release. Forbes speculates that a record label could eventually bid for the album and give it a wide release after the tour.

But time will tell. The only sure thing is that people will go absolutely ape shit to listen to this album — and Wu-Tang couldn't be happier.