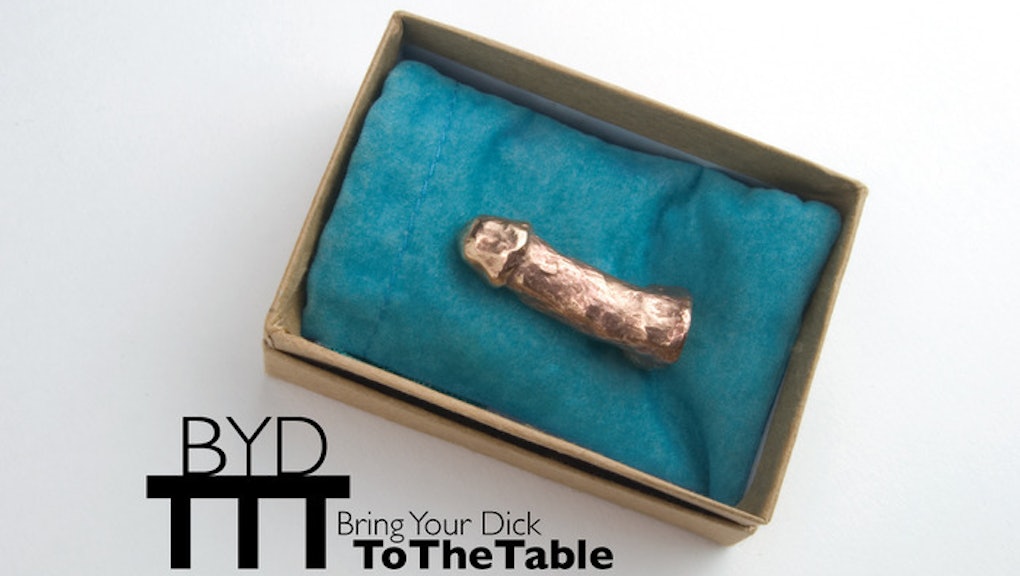 When Holly Wilson, an artist living in Oklahoma, found herself being negotiated out of her commission by a gallery coordinator, she realized that the only difference between her and him was that he had a penis.

So she made herself a penis.

"I realized I could let this take me, wash me out, or I could hold on to my dick. And I could negotiate like the equal that I am and not some wide-eyed kid like this gentleman was treating me," Wilson said in a video on her Kickstarter page.

Wilson now carries around with her a one-and-a-half-inch bronze pecker as a reminder that she shouldn't allow herself to be treated any differently because she is a woman. As she puts it in her product description, "If all that separates us is a dick, then here is mine. Now let's get down to business."

With two weeks left on her Kickstarter campaign, Wilson has reached about a third of her fundraising target. She wants to produce 100 schlongs — left-leaning or right-leaning, your choice — to share her tiny tool of empowerment with others.

What next, miniature bronze breasts for men to carry around so they can remember to be compassionate?

Plus, women are equal to men. Giving ladies a one-eyed snake for empowerment just reinforces the idea that women should conform to men's standards and try to be more like their male counterparts if they want to achieve success. That's not a very empowering notion.

And if everything really does come to weiner warfare, why stop at a one-and-a-half-inch carrot stick? That's not going to cut it at the testosterone table. Women need whomping eight-inch cucumbers, or they'll never be able to stand up to men.

But ultimately, Wilson sees her mini member as more of a joke, not a seminal statement on sexism. "I want to clarify that this isn't my symbol of womanhood. It's just a humorous talisman to remind us that this is what our detractors are basing their judgments on, and that's ridiculous," she told Slate.

"To be clear, I’m not slapping it on the table or threatening people with my tiny dick," she noted in the Slate interview. "It’s more about reminding ourselves that the only reason we’re being devalued is because of this ridiculous appendage we don’t have."

Her campaign isn't really about giving women a cock to clutch, but about reminding women that, in truth, there's nothing men have that women can't have.

As Wilson says in her Kickstarter video, "Sometimes you need that little bit of courage, that little reminder that you can have in your hand or have on you that says you are equal, that you are worth it, and that you should be treated fairly in everything you do."

Put that in your pink cigar and smoke it.