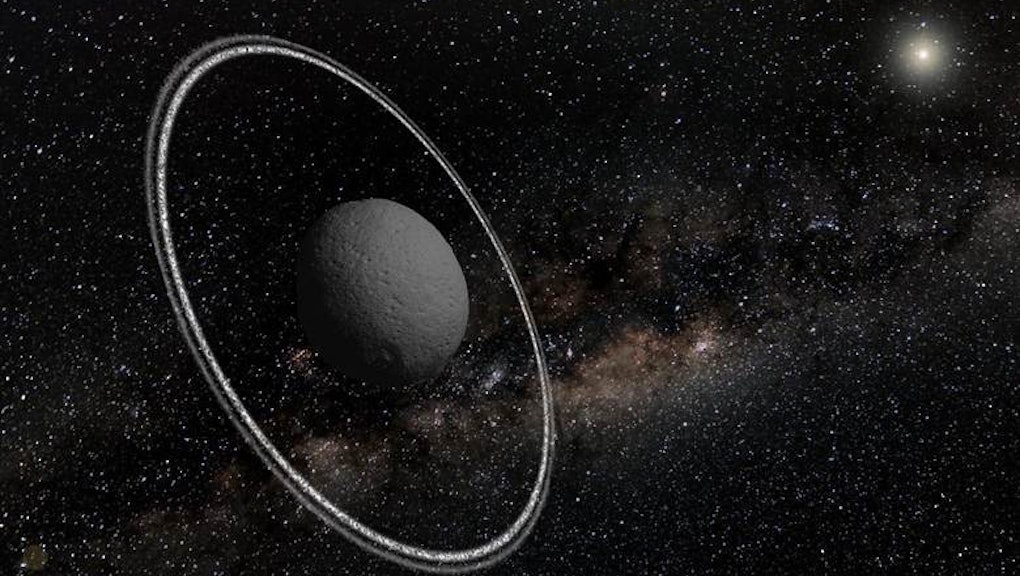 Astronomers have made two amazing discoveries this month that may change the way we think about the solar system — and they're pretty damn cool.

First: Findings announced on Wednesday suggest that "there's a never-before-seen minor planet orbiting the sun beyond Pluto," and potentially a larger one lurking beyond that in the deepest, darkest regions of the solar system. If confirmed, either body would force astronomers to re-evaluate their view of the edges of our stellar locale.

As Discover notes, scientists have a pretty good idea of what makes up the innermost part of our solar system. That includes the rocky planets and the asteroid belt, stretching from an area from 0.39 to 4.2 astronomical units (each AU is equivalent to 93 million miles, the distance between the Sun and Earth). Beyond that, it gets a little trickier. The gas planets range from 5-30 AU from the Sun, while the distant Kuiper belt (a far larger, more distant cousin of the asteroid belt containing dwarf planets like Pluto and Eris) covers the area from 30-50 AU. Far beyond that at 50,000 AU (about a light-year) lies the Oort cloud, a massive sphere of small icy objects that lays about one-quarter of a distance from the next-nearest star, Proxima Centauri.

The only object orbiting our Sun that's ever been confirmed more than 50 AU away is Sedna, a red-surfaced likely dwarf planet about 1,000 km wide that was discovered a decade ago. Orbiting at 76 AU, though, scientists can confirm little about Sedna with current technology. Until now, that object marked the outer limits of the solar system.

Astronomers now think they've identified a new object, 2012 VP113, with a perihelion (the point in a body's orbit at which it is closest to the Sun) of 80 AU. They currently think it is roughly 450 km wide and a dwarf planet. Scientists think there are 900 or more such objects at that distance — meaning that they may have to completely rethink how we judge the boundaries of the solar system. And even more interestingly, when calculating the orbits of Sedna, 2012 VP113, and other Kuiper belt objects, they found anomalies that could be caused by a "massive, 'super-Earth' planet about 250 AU" from the Sun. Such an planet is currently undetectable, as are any similar objects. So it could be lurking there in outer solar system, dead, pitch-dark, and unimaginably cold.

And second: Scientists have discovered that the asteroid Chariklo, which orbits the Sun at a perihelion of 13.08 AU between Saturn and Uranus, has two dense, narrow rings. Astronomers previously believed such small objects (Chariklo is about 258 km wide) didn't have rings at all.

Astronomers think the most likely explanation for Chariklo's rings, nicknamed nicknamed Oiapoque and Chu', is an ancient cosmic collision much like the one that tore our Moon from the Earth. And they're so well formed and compact that Felipe Braga-Ribas of Brazil's Observatorio Nacional/MCTI claims a small "shepherd moon" may be exerting a strong gravitational effect on them.

"It's likely that Chariklo has at least one small moon still waiting to be discovered," Braga-Ribas said.

So there you have it — hidden deep-space planets and asteroids with Saturn-like rings. The solar system is an amazing place, isn't it?