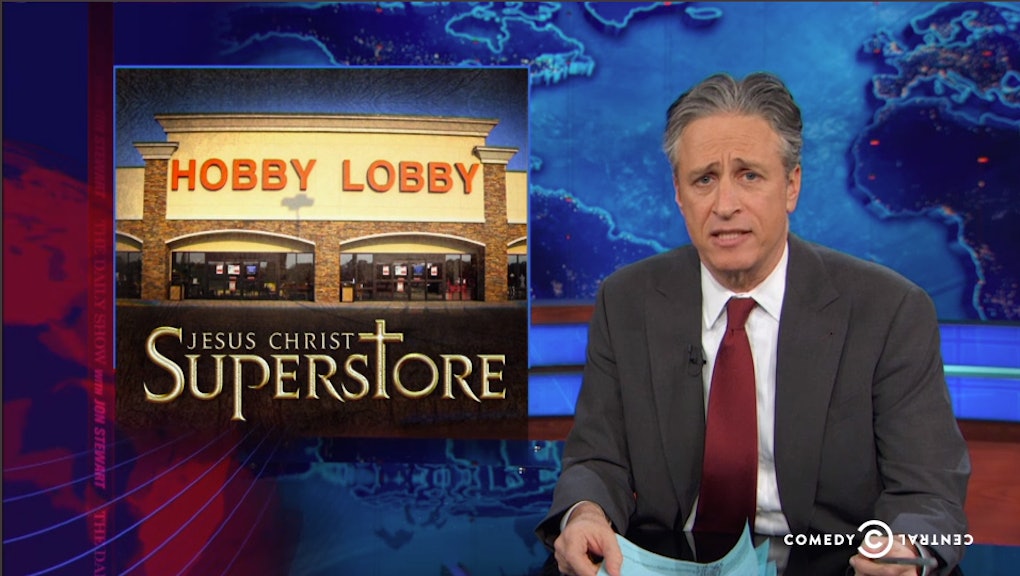 On Wednesday's Daily Show, host Jon Stewart took on craft supply superchain Hobby Lobby over the company's ongoing Supreme Court case over its claim that the First Amendment protects their decision to refuse to provide coverage for birth control under Obamacare. He did it as deftly as always, with assistance from correspondent Jordan Klepper:

PETE WILLIAMS (3/25/2014): The government has to take Hobby Lobby's religious views as they come. So off the table is any question about the accuracy of how Hobby Lobby and another company, Conestoga, would view these contraceptives as agents of causing abortion.

STEWART: So let me get this straight. Corporations aren't just people, they're ill-informed people whose factually incorrect beliefs must be upheld because they sincerely believe them anyway? I guess it's why at Hobby Lobby, they feed their 16,000 employees with but five loaves and two fish. What? The employees are still hungry? They believe you aren't.

The case: At the root of this case is the concept of religious freedom. Hobby Lobby and co-plaintiff Conestoga Wood Specialties Corp. are suing the federal government over a section of the Affordable Care Act that requires large employers to cover contraception costs as part of a comprehensive health care plan or pay a sizeable fine as penalty. Hobby Lobby co-owners David and Barbara Green of Oklahoma and the Mennonite Hahn family of Conestoga Wood Specialties both claim that their strong religious objections to birth control preclude them from complying with the government mandate and are seeking protection under the First Amendment.

The conservative Christian Becket Fund's senior council Lori Windham, who is representing Hobby Lobby, told CBS News that "This case will decide whether a family gives up their religious freedom when they open a family business. The question here is whether the Green family can be forced to do something that violates their deeply held religious conviction as a consequence of the new health care law."

And as part of the Supreme Court's consideration, the justices must disregard whether Hobby Lobby's views on the contraception mandate are accurate. (They're not. Contraception is not abortion.)

Reproductive rights advocates argue that Hobby Lobby's claim puts the inappropriate and invasive interests of a company over an employee's right to adequate coverage as approved by Congress. Stewart exposes the absurdity of the argument that Hobby Lobby's completely inaccurate view that birth control is the same as an abortion mandate:

"So let me get this straight, corporations aren't just people, they're ill-informed people, whose factually incorrect beliefs must be upheld because they sincerely believe them ... What would a biblically based insurance plan even cover?"

Klepper answered: "stoning-related injury, flood damage. It's a great pre-modern medicine, first-century, biblically based health plan that covers you from birth through your elderly years, which I believe is up to 36 years on this plan."

Yeah, kind of crazy. In the modern world, contraception is "integral with our economic security and our ability to hold jobs for our lifetime," said NARAL Pro Choice America's Ilyse Hogue. "We've had enough of this idea our reproductive health is somehow separate from our economic well being ... Our bodies are not our bosses' business."

They fear, as Stewart does, that once the scope of religious freedom is equated with a corporation's right to justify any of its actions through religious belief, ramifications could be felt across the country — regardless of how silly, archaic, discriminatory or unjustifiable those beliefs are. The U.S. solicitor general went so far as saying a decision in favor of Hobby Lobby "would entitle commercial employers with religious objections to opt out of virtually every statute protecting their employees." If the Supreme Court rules broadly affirming Hobby Lobby's right of religious freedom — essentially, expanding the definition of corporate personhood — then it's possible companies could claim religious objections to bans on gender discrimination, labor laws, overtime and minimum wage laws or vaccinations. The Supreme Court didn't seem to share that view.

But even a more limited victory could be have big impacts on the way employees' health care coverage is controlled by employers in America. ThinkProgress fears that a Hobby Lobby victory could even lead to impositions on what a doctor is allowed to discuss with their patient. Hobby Lobby could refuse to pay for doctor's visits that include a discussion of contraception.

"This is telling you that you can't use your compensation — your own benefits that you have earned — in a way that your boss objects to. And that is a frightening road for us to be going down, as a society," says Adam Sonfield, a senior public policy associate at the Guttmacher Institute.

A decision in favor of Hobby Lobby would furthermore be dramatically out of touch with both women's health care needs and the opinions of the American public:

There are a number of ways the Supreme Court could reach a narrower ruling. SCOTUS could rule that the Affordable Care Act puts no significant burden on Hobby Lobby, since paying noncompliance fines is actually cheaper than paying for health care coverage. Or it could take the suggestion of Chief Justice John Roberts that small corporations tightly held by a group of religious owners are quite unlike larger, publicly owned companies. Almost no matter what is decided, the ruling is likely to be a controversial and crucial one that will make deep ripples in American society.