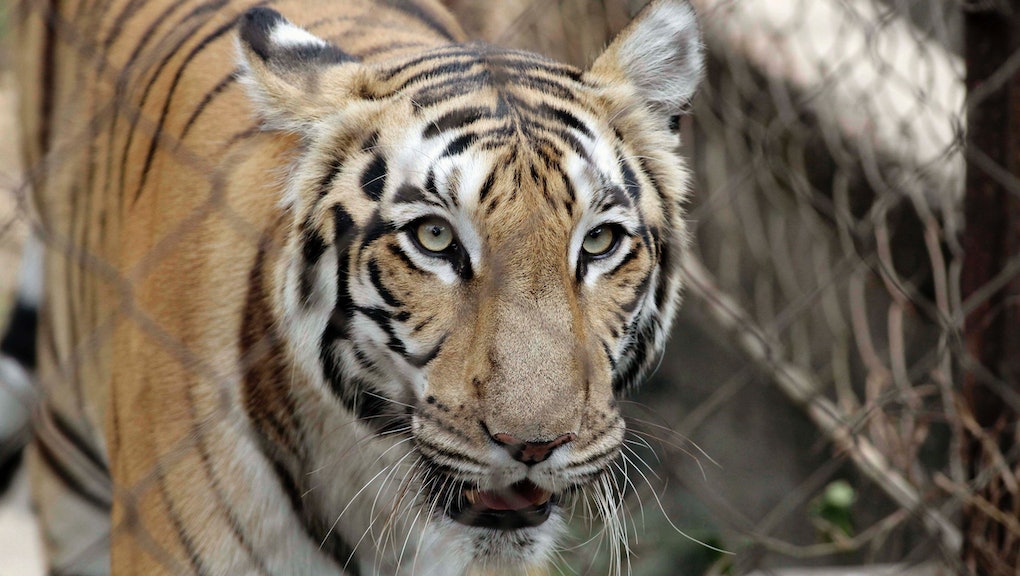 A disturbing new report from China shows that the country's demand for tigers — for their hide, bones, meat and exhibition — is as high as ever. According to state media, 15 people have been arrested in Guangdong province for butchering over 10 tigers in the last eight years. Their reason? They were hired to put on tiger torture shows for local politicians and businesspeople, "simply as a form of entertainment and to show off their wealth".

Not even The Wolf of Wall Street has anything on these "visual feasts," which are exclusive gatherings where the well-to-do eat dinner and watch a tiger get slaughtered. It's a symbol of wealth and social status to participate in these killings; only the rich and the well connected can afford to do so.

At last month's raid, police found a freshly slaughtered tiger, multiple tiger products as well as footage depicting the animals' torture. The video below, allegedly recorded in 2012, shows a tiger being electrocuted in its cage:

Illegal poaching and trade of tigers is harshly punished in China, and the 15 arrested men may face the death penalty. (One leaped to his death while attempting to escape the police raid).

Still, not even the threat of death has quelled the lust for all that tigers represent: health, virility, wealth and power. Tigers are still considered an important part of Chinese traditional medicine, with many people believing that eating a tiger helps to boost one's strength. A pound of tiger bones goes for well over $1,000 on the black market, while a pound of meat is around $80. These illegal items are often used as bribes to wealthy businessmen or government officials.

According to the World Wildlife Fund, there were 100,000 wild tigers in Asia a century ago. Now, barely 3,000 are left. Consumer demand is the single biggest cause of death for these tigers, and the non-profit estimates that over 1,000 tigers have been killed in the past 10 years to meet Asian demand for their skins, bones, teeth and claws.