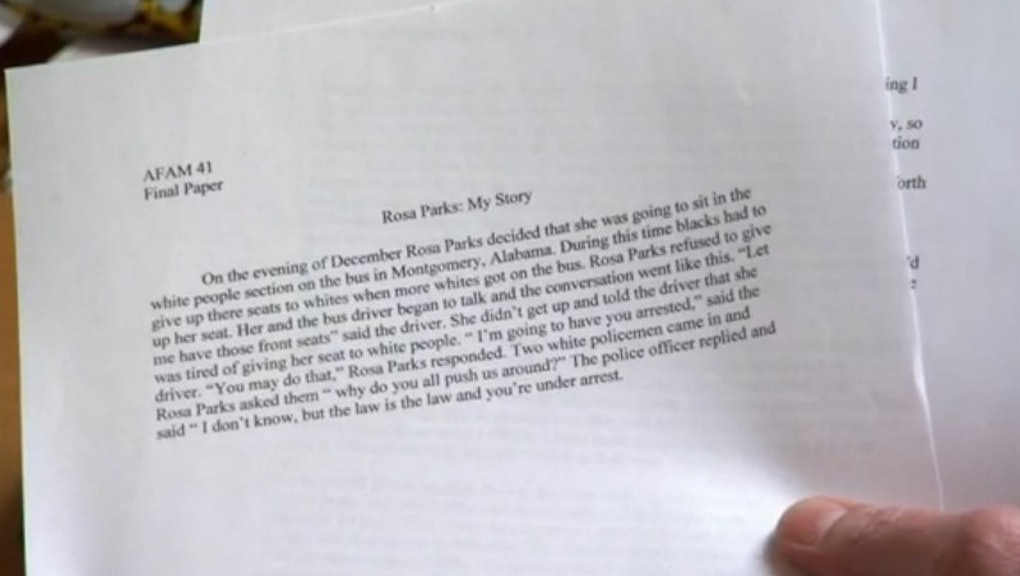 Well, this is awkward.

Scandal rocked the University of North Carolina on Tuesday when ESPN’s Outside the Lines revealed how the school has been funneling “student-athletes” into bullshit courses to keep them eligible to play sports. Minimal work is required in these courses, and every paper receives an “A” or “B” grade, no matter how awful.

The problem went public in January, but many details were unclear until now. The defining image has been this joke of an “essay” about Rosa Parks:

She added: “Students were taking classes that didn’t exist – they were called ‘independent studies’ at that time. They just had to write a paper … There was no attendance.”

That’s a problem. Willingham believes that “everybody knew” this was going on, from the dean of the college to the athletics staff. UNC’s Afro-American Studies program has received particular heat, since most of these “paper classes” were listed under their name. In an “amputate before the gangrene spreads” move, the university is saying the scandal is isolated to this department. Right.

While this is troubling on many levels – most prominently the athletes’ academic under-preparedness and the university’s lack of investment in their education – many critics are drawing attention to the NCAA’s controversial “student-athlete” terminology.

Basically, the NCAA justifies making millions of dollars off their various sports programs – without paying college athletes – by insisting that a college education is adequate compensation. It calls its players “student-athletes,” claiming they are students first, and arguing that treating them as employees would be "unacceptable."

Gary Gutting points out the term’s hypocrisy in a New York Times op-ed: "[It] implies that all enrolled students who play college sports are engaged in secondary (‘extra-curricular’) activities that enhance their education."

At UNC, this clearly isn’t the case. Rarely has it been so obvious that college athletes are players first and students as an afterthought. It’s completely unfair to the university’s non-athlete students, and especially the players themselves, who are being "cheated" out of the education they were promised.

“I’ve never spoken to an NCAA rep,” says Mary Willingham. “They don’t want to talk to me because I know too much, and because I’m willing to tell too much … It’s a whole system of corruption.”

Deunta Williams adds: “The NCAA doesn’t care about the truth being out. They want their message to be out – ‘players shouldn’t be getting paid to play football.’”

At the very least, UNC has a serious problem to deal with. At worst, this is a nationwide problem that requires immediate investigation.