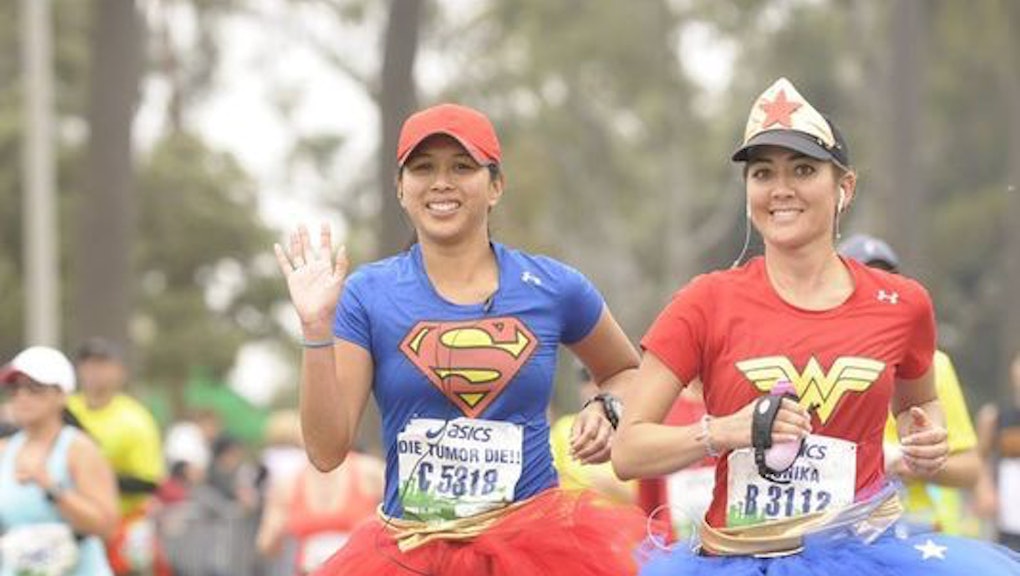 SELF Magazine made a major flub in its newly released April issue when it mocked a photo of cancer survivor Monika Allen running last year's LA Marathon in a tutu.

The image, which SELF had requested from Allen, fell on the "lame" realm of the magazine's "BS Meter" and was presented along with the hilarious (and by hilarious, I do mean not remotely funny) caption: "A racing tutu epidemic has struck NYC's Central Park, and it's all because people think these froufrou skirts make you run faster. Now, if you told us they made people run from you faster, maybe we would believe it."

The problem? Allen is a brain cancer survivor who'd been undergoing chemotherapy at the time of the marathon, and was wearing the "froufrou skirt" (along with a Wonder Woman shirt) to keep her spirits up. Oops.

Things actually get worse. Allen is the co-founder of Glam Runner, the company that makes these tutus in an effort to raise money for "exercise and confidence-building programs for young girls." Allen and her friend Tara Baize (you know, the one with the subtle "DIE TUMOR DIE!!" on her running bib) are board members for Girls on the Run San Diego, the nonprofit that Glam Runner's proceeds support.

Even if Allen hadn't had cancer, this is messed up. This is the kind of thing that happens when women's appearances are routinely treated as fair game for commentary, if not outright mockery, by strangers. She's running a marathon, for Christ's sake — she can wear whatever she damn well pleases.

But the Internet's response has been swift. People flocked to the Glam Runner's Facebook page to post images of themselves in tutus in support of Allen, some declaring that they're cancelling their SELF subscriptions in solidarity.

To its credit, the magazine seems pretty contrite (as it should be). Editor-in-Chief Lucy Danziger told USA Today, "I am personally mortified. I had no idea that Monika had been through cancer. It was an error. It was a stupid mistake. We shouldn't have run the item." The magazine has issued an apology on its Facebook page, and reportedly made a donation to Glam Runner.

Allen is using the publicity to spread Glam Runner's mission rather than slam SELF:

If you'd like to take a page out of Allen's book, support Glam Runner and Girls on the Run in their efforts to make exercise a little more fun. After all, as Allen says, "One little smile or an extra cheer from a stranger can really make things better."