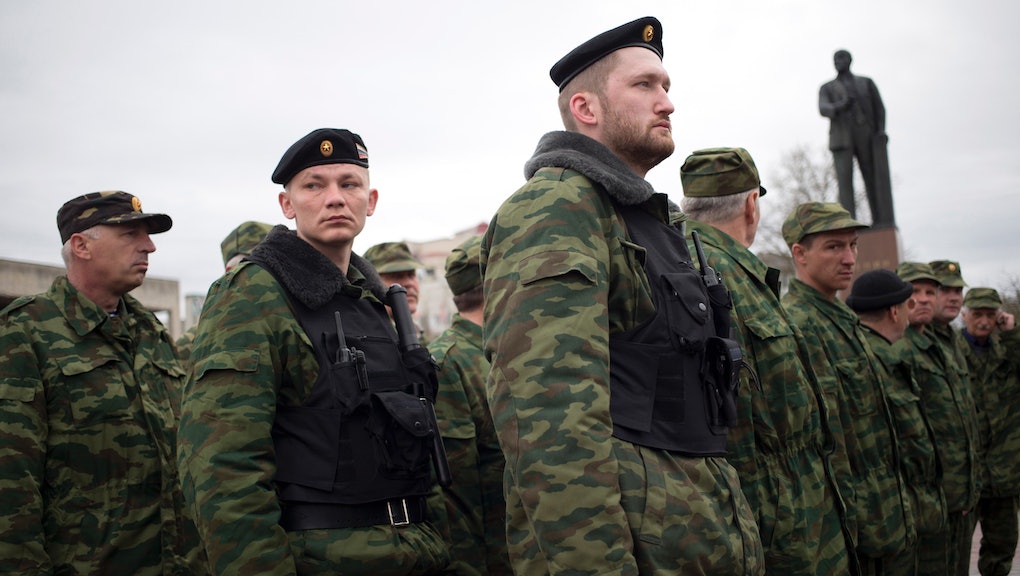 The news: Whether the international community may accept it or not, Russia has now annexed Crimea — and it looks increasingly like it has eyes on the rest of Ukraine as well.

Though Russia continues to insist that it is holding routine military exercises on the Ukrainian border, top U.S. officials believe that Russia has as many as 30,000 troops in the region, preparing for a full-scale invasion of its neighbor. "They continue to reinforce, and it continues to be unclear what exactly the intent there is ... We've seen no specific indications that exercises are taking place," said Pentagon spokesperson John Kirby.

That concern has been echoed by many in the international community, as there is increasing evidence that Russia may be prepping for a long-term military engagement. Intelligence reports indicate that troops on the Ukrainian border have been stocked with food and medical supplies, and that a field hospital has been set up.

Why does it want Ukraine? When you look at the map, it looks increasingly like Russia is trying to reclaim the lands it has historically held.

"There is a clear risk that Russia will go beyond Crimea and the next goal will be the eastern provinces of Ukraine," NATO Secretary-General Anders Fogh Rasmussen said. "It is a Russian attempt to redraw the map and I would call it a kind of Russian revisionism which is unacceptable. It's not an acceptable behavior in the 21st century."

Russia also believes that Ukraine is the key to the rest of Eastern Europe. For years, it has been attempting to build a Eurasian Union to challenge EU and NATO, and Ukraine — with its resources and its 46 million people — would be the crown jewel. "If you have Ukraine, the Eurasian Union moves a little further west, and puts it right on the border of the EU," said Hannah Thoburn, a Eurasia analyst at the Foreign Policy Initiative. "Russia desperately wants to have Ukraine."

What will happen next? NATO's supreme allied commander General Philip Breedlove also announced this week that Russia may be preparing for occupation of Trans-Dniester, a breakaway region of Moldova that has voted to be annexed by Russia. If the annexation goes through, Russia would effectively surround Ukraine on two sides:

Ukraine's other western neighbors include Hungary, Romania, Slovakia and Poland, while its northern border is surrounded by Belarus, a staunch Russian ally. In fact, Belarus is one of only 11 countries that voted down a UN General Assembly resolution which deemed the Crimean annexation illegitimate. It was in rather colorful company: Armenia, Bolivia, Cuba, North Korea, Nicaragua, Sudan, Syria, Venezuela, Zimbabwe and of course, Russia. The resolution overwhelmingly passed with 100 countries in favor and 58 abstentions.

With troops in Crimea and potentially in Trans-Dniester and Belarus, Russia can landlock much of Ukraine — and have a stranglehold on Eastern Europe. The fear that many in the international community now have is not whether Russia will invade Ukraine, but when it will decide to take over the rest of the region.

"More or less we took for granted that the Cold War belonged to the past," Rasmussen said. "I grew up in the shadow of the wall and the Iron Curtain, and in a way I couldn't believe that it could be changed. Then suddenly, almost overnight, everything changed."