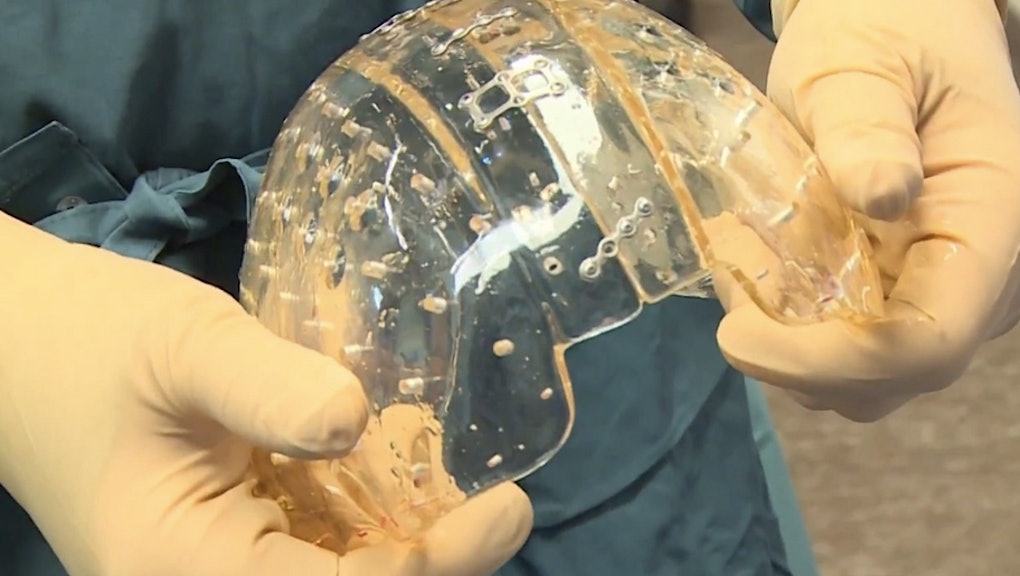 Over the past few years, doctors and researchers have had medical breakthroughs, thanks to 3-D printed lung splints, prosthetics, heart membranes and even human tissue. Now the transformative technology may have had its most incredible success yet: Neurosurgeons in the Netherlands announced on Tuesday that they have been able to implant a 3-D printed skull for the first time.

The subject was a 22-year-old woman who had a rare bone disease, which made her skull grow abnormally thick. Her condition was threatening her vision and posing a neurological risk, so doctors had to come up with a creative solution to provide her with a new skull. Although they had previously used 3-D printing to replace skull fragments, this was the first time that nearly the whole skull has been printed.

"Implants used to be made by hand in the operating theatre using a sort of cement which was far from ideal," said Dr. Bon Verweij, who led the operations at University Medical Centre Utrecht. "Using 3D printing we can make one to the exact size. This not only has great cosmetic advantages, but patients' brain function often recovers better than using the old method."

The 23-hour operation actually took place three months ago, but researchers waited to make an announcement in case the patient's body rejected her new skull. She has since made full recovery.

"The woman has her eyesight back. She is back to work and it is nearly impossible to see she was ever operated on," Verweij said.

If you want to learn more about UMC Utrecht's groundbreaking work, you can watch the university's video below; it's in Dutch, but the doctors walk you through the preparation stages and the actual operation itself. It's a fascinating look at 3-D printing's live-saving potential — just be ready to see some brain matter on display.