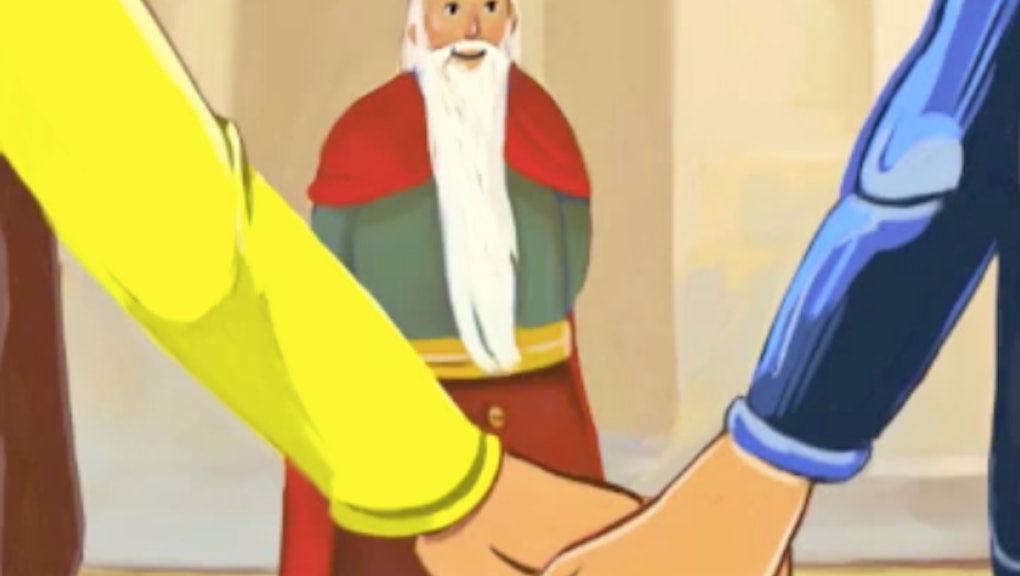 This Fairy Tale With an LGBT Twist Should Be Required Reading

Childhood can be tough for youngsters wrestling with their sexual orientation. To grow up in a world dominated by happy endings where the prince always ends up with the princess, or vice versa, can be alienating. In an effort to change this, investment banker-turned-children's book author Daniel Errico decided to put an inspiring spin on the conventional fairy tale with his latest illustrated effort, The Bravest Knight Who Ever Lived.

Errico's protagonist, Cedric, is a poor boy who grows up on a pumpkin farm. He later becomes a heroic knight and rescues a prince and princess, but politely refuses the princess' hand in marriage, so he can marry the prince.

It's a heartwarmingly refreshing, if simple idea, so of course it's also controversial.

Len Deo, president of the New Jersey Family Policy Council, told NJ.com that the book shouldn't be taught in school.

"We don't have an issue with the book. This is America," he said. "It's up to parents whether or not they'd want to share a book of this content with their children."

The story, narrated in rhyming couplets, progresses as you would expect in a fairy tale of this genre. Cedric is a hardworking, caring young boy who grew up with little means and was always ready to take on a challenge. He proves his mettle by defeating a dragon, becomes a knight and is showered by praise and gifts, but he refuses them all. The young daughter of the king and queen is charmed, and the story goes: "The princess said she would like to be his bride."

To the family's surprise, Cedric politely refuses. "But now I must be brave and say that isn't how it ends," choosing the prince instead. Although just a simple children's book, the plot of The Bravest Knight is actually very effective in the way it touches on the sometimes scary process of coming out, and on seeking acceptance from one's friends and family.

The king at first struggles with Cedric's choice. "At first he didn't understand, at first he had refused," was the king's initial response. "But as he saw their faces, in his heart the truth was clear. His son was meant to find his knight, he needn't doubt or fear."

Today more than ever, children's literature needs to diversify in order to teach children tolerance and acceptance in an increasingly progressive world, where princes and princesses don't always live happily ever after together.

"Once upon a time in a kingdom like your own, there lived a knight named Cedric, the bravest ever known."

The fun-loving Cedric was always looking for challenges, playing dress-up in armor made from pumpkins.

One day while playing, Cedric comes across a robbery in progress. The resourceful Cedric saves a carriage full of gold belonging to a local knight.

To thank him, the grateful knight makes Cedric a squire and trains him in the ways of the noble warrior.

Eventually Cedric is made a knight, and sets off on his own. Coming across a dragon's castle, a clever Cedric defeats the beast by tricking him into eating water-filled pumpkin shells. Unconventional, perhaps, but effective.

Defeating the dragon frees a prince and princess, who both run out of the castle to thank their hero.

The group walks home, and Cedric and the prince talk the whole way. There's nothing like an epic road trip to kindle a friendship. Or maybe something more?

At the prince and princess' home, the king and queen try to reward Cedric. Then, naturally, the princess asks to marry him. No one could refuse a beautiful princess, could they? Actually, Cedric could.

"Princess, you are kind, and I am glad that we are friends. But now I must be brave and say, that isn't how it ends."

The prince happily accepts, and although the king is at first confused, he sees how happy the two are, and gives the union his blessing.

"But as he saw their faces, in his heart the truth was clear. His son was meant to find his knight, he needn't doubt or fear."

The royal wedding goes on without a hitch.

"The celebration roared with all their family and friends. And Cedric knew, 'My fairy tale, this is how it ends.'"

And they all lived happily ever after. His and His monogrammed breastplates, anyone?