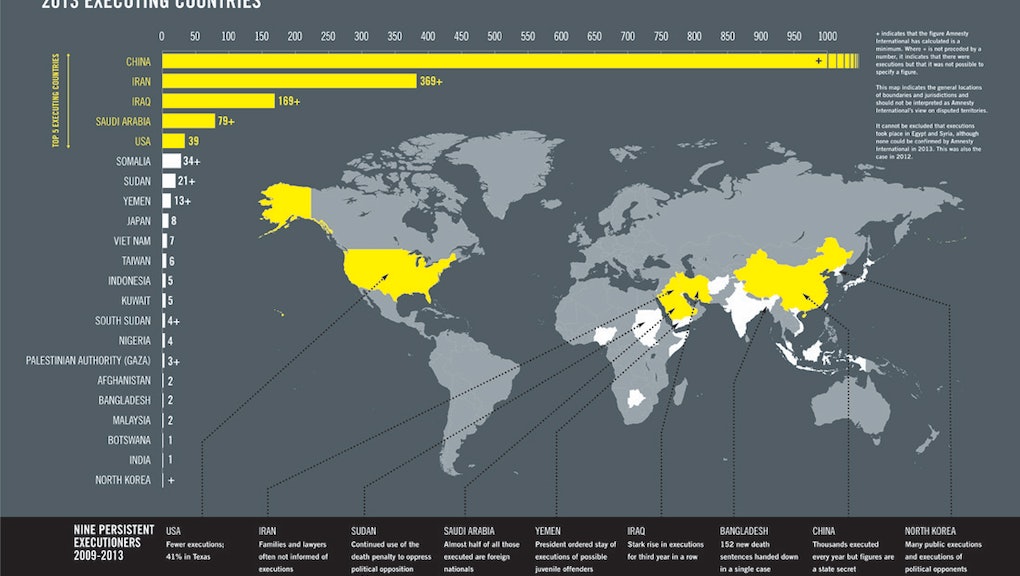 After more than 10 years in prison, Anthony Doyle (pictured below), 29, became the latest American to face the death penalty. Last Thursday, he was put to death for the 2003 murder of Hyun Mi Cho, a 37-year-old woman delivering food to Doyle's parents' home outside of Dallas.

Doyle is the 14th prisoner to face execution this year and the fourth Texan. Texas alone has plans for six more executions before the end of May.

Though the road from crime to execution is often a long and shifting one, riddled with debate, trials and attempts to appeal, the United States nonetheless executes more death sentences than the vast majority of other nations.

A recently released Amnesty International report puts this in perspective: We had the fifth most executions in the world last year — the only nation in the Americas, and the only Western country, featured in the report's graphic. The four other front-runners? A decidedly undemocratic crowd: Saudi Arabia, Iraq, Iran and China, which clocks in at the top slot.

This is a wake-up call.

The use of the death penalty in the United States continues to be a contested, and perhaps altogether ironic (or in the minds of some, contradictory) issue, especially when considered with the country's active pro-life movement. Every January in Washington, the U.S. is home to the largest anti-abortion event in the world. We're first when it comes to our efforts to save an unborn child.

But we don't apply the same sense of justice to adults that in some cases is eagerly applied in other cases. Two of this year’'s 14 judicial executions took place in Oklahoma, and another four in Texas; ironically, these states rank second and sixth, respectively, as the nation's most pro-life states. In other words, the states boasting the most Right to Life advocates are also responsible for a good chunk of the country's death penalties.

The state of Maryland (which, for those keeping tabs, is No. 9 in what Americans United for Life call "pro-abortion" states) last year became the 18th state to abolish the death sentence. This move echoes a larger trend toward abolition — one of the bright spots in the Amnesty report — but the U.S. still lags significantly behind.

A common thread among countries on the list was the claim that the death penalty is used to combat and decrease the threat of crime — despite lack of credible evidence suggesting capital punishment has this influence, according to Amnesty International.

That puts us in terrible company.