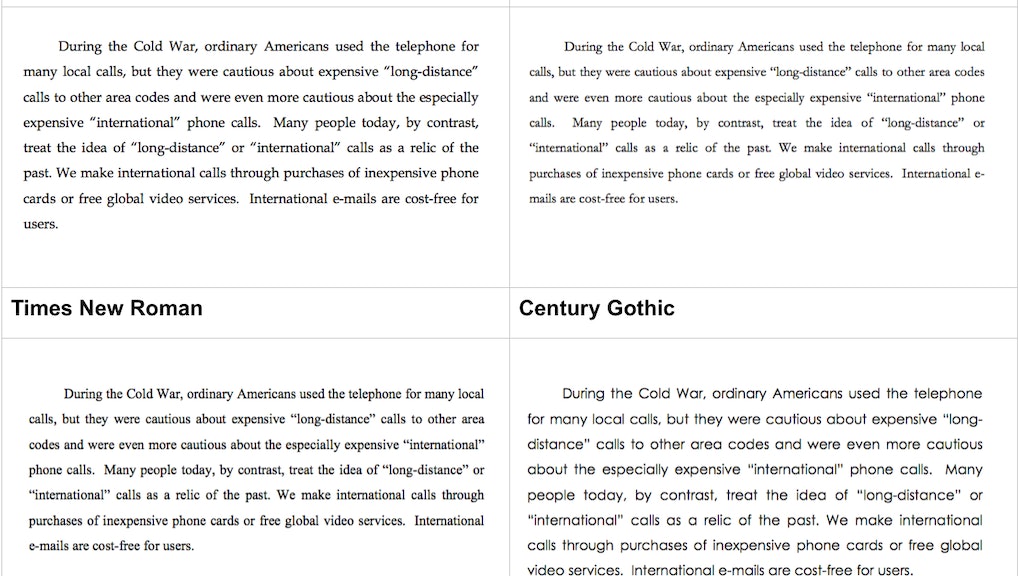 Anyone who's ever had to finish an impossible paper or edit down a resume knows the trick is in playing around with the font, using different styles to make the same text dramatically longer or shorter. But would this also work for saving TONS of money?

According to one entrepreneurial 14-year-old, yes. Suvir Mirchandani, a Pittsburgh middle-schooler, was curious about how much ink different font types use. For his science fair project, he applied the same text sample with four different fonts — Garamond, Times New Roman, Century Gothic and Comic Sans — and calculated how much ink was used in each. In the end, thin-stroked Garamond was the clear winner.

But the most striking thing about Mirchandani's project was the financial implications. When he learned how much ink and paper his school district uses, he calculated that switching to Garamond would cut ink consumption by 24% — and save his district $21,000 annually.

When Mirchandani submitted his findings to the Journal of Emerging Investigators, a youth academic publication, the editors immediately recognized the project's potential. "We were so impressed. We really could really see the real-world application in Suvir's paper," said Sarah Fankhauser, one of the paper's founders. So they gave him a new challenge: calculate how much the federal government would save by switching to Garamond.

The government is a huge ink-and-paper consumer with a $1.8 billion annual budget for printing. When Mirchandani took government publication samples and extrapolated his previous findings, his discovery was extraordinary: the government could reduce its costs by 30%, saving $136 million every year if it switched to Garamond — $234 million if state governments adopted the same measure.

A 2012 government study recommended using Garamond, Times New Roman or Century Gothic, but Mirchandani found that Garamond was significantly more ink-efficient — and that Century Gothic was much worse than other fonts:

And not only did Garamond use less ink, it took up a lot less space than other fonts, which means that it can help cut down on paper use as well:

The Government Printing Office has called Mirchandani's research "remarkable," although it remains to be seen whether they will actually implement the change. But switching to Garamond is something everyone can do at home to cut down on printing costs. The thin font may not be the most popular choice right now, but it has real cost-cutting benefits for the public.

"I recognize it's difficult to change someone's behavior. That's the most difficult part," Mirchandani said. "I definitely would love to see some actual changes and I'd be happy to go as far as possible to make that change possible."