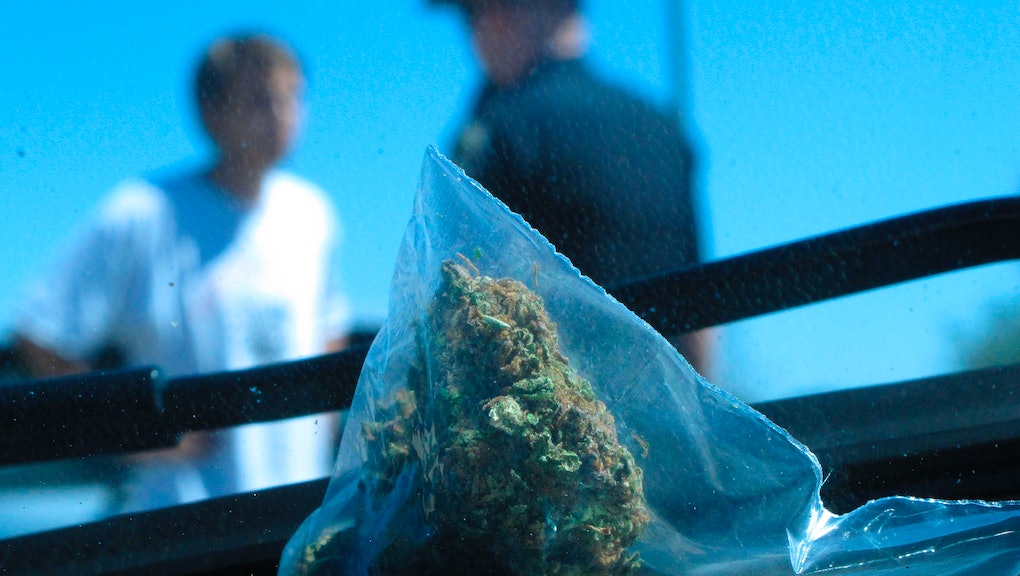 The news: A federal profiling lawsuit alleges that an Idaho state trooper followed, pulled over and harassed a 70-year-old man on the stretch of I-84 bridging Colorado and Washington state. The officers believed there was reason to believe he was transporting marijuana — solely because of his Colorado license plate.

Darien Roseen was driving between his two homes in Colorado and Washington when State Trooper Justin Klitch begain tailing him. According to Roseen, he decided to pull into a rest-stop because the close police pursuit was making him uncomfortable. Klitch then decided to turn on his lights and detain Roseen, later citing the motorist's failure to signal and that the car bumped into the curb while parking.

What happened next likely isn't a surprise to anyone who knows about police treatment of suspected drug users. Roseen's complaint states that Klitch failed to say why he had been pulled over and asked Roseen to provide his medical marijuana card (he did), upon which he accused the driver of "having something in his vehicle that he should not have." Roseen consented to a search, after which the officer detained him without placing him under arrest in the back seat of his cruiser and another officer drove the car to a local sheriff's office. A full-scale search later, nothing was found, and Roseen was reluctantly freed.

Commonplace? While Colorado and Washington both have legalized the possession of small amounts of marijuana, neighboring states haven't, and police officials have explicitly stated their intention to carefully patrol and protect their borders. With this patchwork of legal/illegal borders, profiling and harassment of people traveling between legal-weed states is unfortunately inevitable.

"The story runs the same: [Coloradans] are detained for two hours while the police dismantle their vehicles," argues legalization activist and defense attorney Rob Corry. "They find nothing and later admit it was because they're from Colorado."

Police in other states seem deeply suspicious. Sheriff Jeff Stevens of Keith County, Nebraska claims that "We truly do believe that we're going to be inundated." Deputy Sheriff Roland Kramer says that "Long term, I don't know" what effect legalization will have. "You know that's going to flood over. We're at the beginning stages of it; we don't know the full impact. We're very, very concerned as law enforcement."

Some police go even further. According to Deuel County Sheriff Adam Hayward, "You can't tell me that Colorado has it regulated when kids from three states away can figure out how to make a better living than you or I by running to Denver and picking up weed, taking it back and selling it. They were making about $4,000 profit a week.''

Because of this, anyone who might be an arbitrary or stereotypical profile of a stoner and happens to be travelling to and from Colorado could find themselves in a bind. Plus, this perfectly illustrates the hazards that go along with a piecemeal legalization strategy. While Colorado has won a major victory against the drug war, the actions of police just miles away across the border illustrates how far the U.S. still has to go on drug policy.