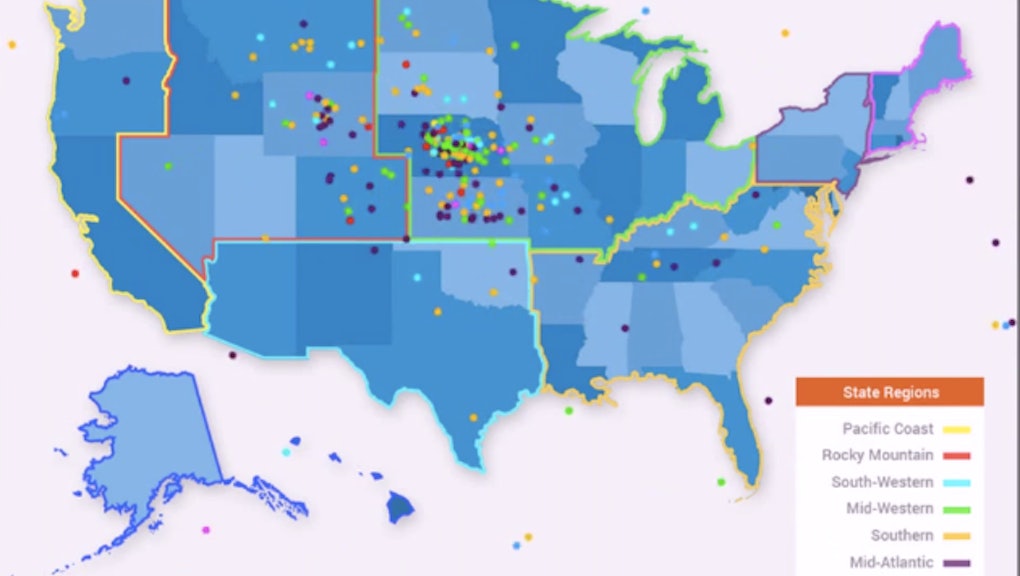 Watch 400 Americans Struggle to Point Out Each U.S. State on a Map

According to a new study conducted by real estate company Movoto, it turns out Americans don't really know all that much about the nation's geography. Like, at all.

Movoto asked 400 people to use a computer cursor to identify the 50 states in about five seconds each. Movoto watched the real-time results from their own map, which displayed the participants' mice as they struggled to identify the appropriate states. The results were, to put it mildly, discouraging.

Break it down: The good news is that respondents had an easy time identifying some of the more iconic or uniquely shaped states, like California, Texas, Florida, Alaska and Hawaii, almost all of which were selected correctly by participants. But outside these, participants performed pretty poorly. When asked where Virginia was, many selected Kentucky or North Carolina, while Mississippi was confused with Alabama, Louisiana or even Arkansas, which doesn't have a coastline. The Midwest proved tricky to respondents, while Movoto says New England is where "utter pandemonium raged" amongst the participants. Maine was the only reliably selected state, which isn't saying much, seeing as it's the Northeastern tip of the country.

Not impressed: While Movoto unfortunately didn't include any hard data or how they selected participants, they claim their study falls roughly in line with National Geographic’s 2006 Geographic Literacy Survey of Americans aged 18 to 24. In that survey, just 50% of participants could identify New York, while only 43% could locate Ohio. And while 94% knew where the U.S. is, three in 10 apparently believe the national population is 1-3 billion. A less scientific survey by BuzzFeed conducted last year also showed that their staff has an abysmal knowledge of Europe's geography.

Our lack of geographic know-how is a good sign that many Americans (and to be fair, many people across the globe) know little about what they haven't seen first hand. And that lack of knowledge has real-world consequences. In 2006, a poll found that after three years of combat and nearly 2,400 fatalities of U.S. personnel in Iraq, almost two-thirds of Americans aged 18-24 couldn't find Iraq on a map.