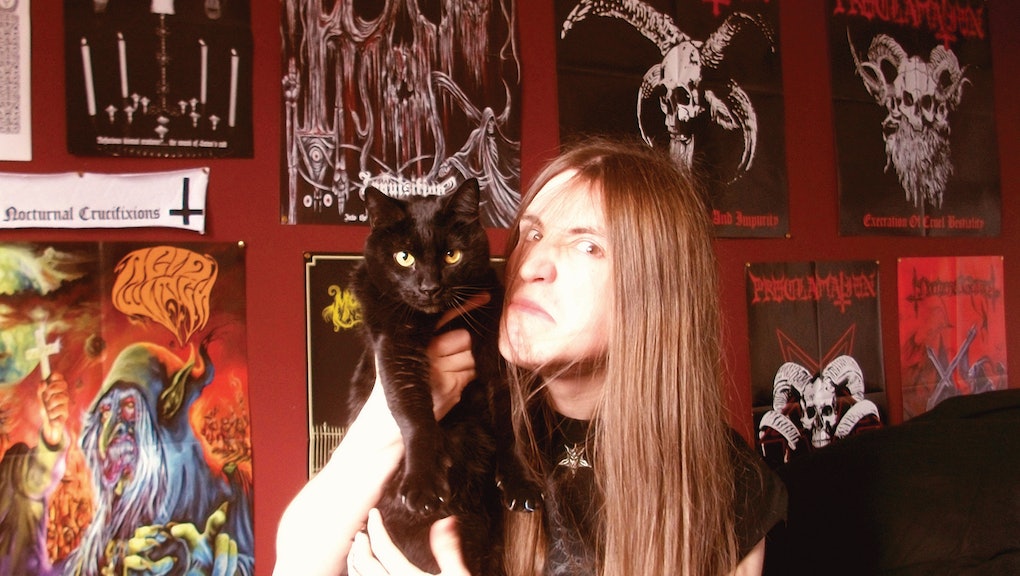 Metalheads Posing With Cats Prove Even Heavy Metal Can Be Adorable

When we think of hardcore metal music, we often picture stringy-haired men slamming guitars and biting the heads off bats a la Ozzy Osbourne. The music itself is angry and riotous, usually played loud enough to make listeners lose track of their thoughts and focus solely on the emotions the notes stir up. As for the musicians behind the music, we often stereotype them by their sound. They must be as angry and intense as the music they make, right?

Not so much. Alexandra Crockett proves in her new book Metal Cats, which features heavy metal musicians posing lovingly with their pet cats, that there is much more behind the music.

Crockett's book, which comes out in May, is already getting attention on the Internet. Her work has been featured on Flavorwire and Laughing Squid. Her photographs portray metal musicians from bands like Lightning Swords of Death, Murder Construct, Morbid Angel and Cattle Decapitation at home happily fooling around, cuddling with and caring for their little felines.

It's all long hair, fluffy fur and playful mean muggin'. The sheer fluffiness of these cats obliterates any expectations of violence and hatred surrounding heavy metal musicians and helps us see past the rough stigma.

It just goes to show that you should never judge a book by its cover — or a musician by his decibels.

To make this project even better, a portion of the proceeds from the book and a series of benefit shows will go toward no-kill shelters. Who said death metal was all about the morbid?