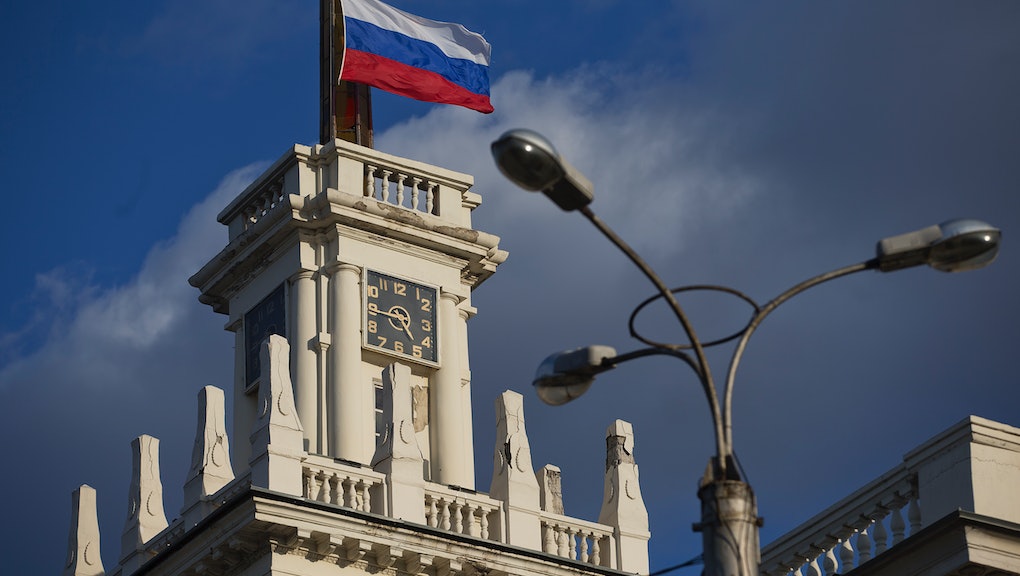 11 Russian Laws That Will Change Life for Crimeans

For all intents and purposes Crimea is now part of Russia. After months of protests in Ukraine that eventually ousted President Viktor Yanukovych, Russia took advantage of the turmoil and moved in to seize control of Crimea, officially annexing it after a widely criticized referendum.

With Ukrainian armed forces being kicked out of their bases and armed militias walking the streets, Crimea has doubtlessly entered a more turbulent period of its history.

But as the blue and gold of the Ukrainian flag is taken down and replaced with the Russian tricolor, it is important to remember that changing countries is about more than pomp and symbolism. It is also about becoming subject to a whole new body of laws.

Though some of those laws will mean little more than a superficial change or minor inconveniences, others will reflect a Russian legal landscape that has grown increasingly draconian since the care-free days of the '90s.

Crimeans will have a lot to get used to. Here are 11 laws that will change the life for Crimeans in big and small ways.

1. The anti-gay propaganda law will be in effect.

Crimeans will now have to adhere to Russia's anti-gay propaganda law. In the run up to the Sochi Winter Olympics, Russia was widely criticized for the law, which makes the "propagandizing non-traditional sexual relationships" a finable offense and has been used in practice to quash LGBT rights protests. Ukraine too has a version of the law, but so far it has yet to move from the parliamentary floor.

3. University entrance exams will be in Russian only.

Crimea has a diverse linguistic landscape that includes Russian, Ukrainian, and Crimean Tatar speakers. While the new government in Crimea plans on keeping Russian and Tatar as official languages, Ukrainian’s future is less certain. One area where there will certainly be changes is university entrance exams. Whereas Ukraine allows university entrance exams to be taken in minority languages, in Russia those exams can only be taken in Russian. That issue is a sore point for Russia’s many minority language groups.

4. There will be a mandatory military service.

Ukraine abolished mandatory conscription in 2013, but the practice is still in force in Russia. For young Crimean men, that means being called up to serve their new country in the fall and, for many, being subject to the brutal hazing the Russian army is infamous for.

5. Passport will be required to buy a SIM card.

In Russia, buying a new SIM card requires the registration of your passport. Yanukovych tried to do the same to keep better tabs on protesters, but the measure was never widely enforced and has since been repealed.

6. There will be tighter restrictions on the fight against HIV/AIDS.

Since the collapse of the Soviet Union, Russia and Ukraine have faced a rapidly growing HIV/AIDS epidemic fueled predominantly by the use of intravenous drugs. The number of new infections in Ukraine has begun to fall as a result of the government now distributing clean needles and the introduction of methadone treatment. In Russia, however, the number of new infections continues to grow, methadone is illegal and the government does not distribute clean needles because it is considered to encourage drug use.

7. Residents will be in a new time zone.

Crimea will now be looking east in more ways than one with the peninsula joining Moscow’s time zone. That shift places Crimea two hours ahead of Ukraine most of the year and three the rest, with Russia no longer participating in daylight saving time.

8. The Russian ruble will be the currency.

With the ruble’s status as the official currency of the Russian Federation, making Crimea part of Russia means replacing the Ukrainian hryvnia. That not only means changing what currency is accepted in shops and stores but also converting people’s saving held in Crimea’s banks. Crimea’s leadership is planning a transition period when both currencies will be accepted, but it will be rubles only after that.

9. NGOs will be cut off from funding.

In 2012 Russia passed a law requiring NGOs receiving foreign funding to be subject to rigorous auditing and to identify themselves as "foreign agents" (read: spies). With NGOs seeing their work threatened by the law many, were forced to close or to make due without international grant money. In his last days Yanukovych saw to it that a similar law was passed in Ukraine, but, like the SIM card law, is has since been repealed. Now subject to the law, Crimean NGOs will also have to make difficult choices about the future of their organizations and their funding.

10. The Internet blacklist will affect how residents work the web.

Since 2012, Russia has maintained an unpublished list of Internet sites that are not accessible from within the country. Though the list was originally presented as a way of stopping access to child pornography and information about drugs and suicide, it has since been used to block access to opposition sites. With the law now extending to their Internet service providers, Crimeans will find themselves with a smaller Internet.

11. Visas will be required for entry.

Since the Orange Revolution, Ukraine has done away with visa requirements for most developed nations, which has led to more tourists visiting the country. Russia, on the other hand, continues to not only require visas for those countries but also require visitors to go through a complicated registration process.

That change is likely to keep many European tourists away, and the ongoing conflict with Ukraine will keep the Ukrainians who previously made up the majority of tourists from returning. Though Russia is putting pressure on air carriers to drop rates, and on government officials to take their vacations in Crimea, the beaches are still likely to be emptier than usual.