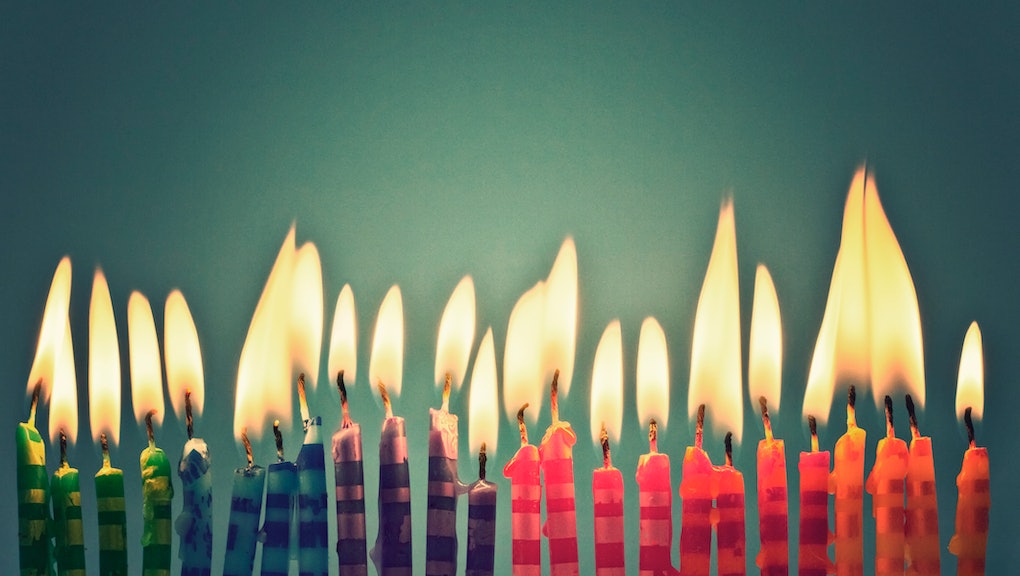 Individual birthdays come once a year, but the tune used to celebrate them fills the air daily. And despite what YouTube suggests, the most sung song in the English language is not "Let It Go" — it's "Happy Birthday." And, like many popular things in this world, that means "Happy Birthday" makes tons of money.

1. The songwriters originally wrote it as a different song.

"Happy Birthday To You" has a long and complicated history. It's documented as having been sung since 1900, then popping up again in 1911 and 1912 before being officially copyrighted in 1935. But when Mildred and Patti Hill first wrote it, it was completely different.

The two sisters taught kindergarten together, and composed the melody in the 19th century to sing to their class. It was originally called "Good Morning To All," and had absolutely nothing to do with birthdays.

But though the Hills went down in history as writing the song, people have started challenging their authorship. And that's a problem because "Happy Birthday" is a huge money maker for Big Music.

To make the song's legal status significantly more complicated, the Hill sisters may not be responsible for it at all.

First, there's the question of whether they even wrote the melody. Then there's the fact that the lyrics were credited to the Preston Ware Orem and Mrs. R.R. Foreman songwriting team when the song first came under copyright with the Summy Company. And third, some people believe the Hill sisters' kindergarten students — for whom the song was allegedly written —  changed the lyrics altogether.

It wasn't a big deal right away, but in the latter half of the 19th century, birthday parties and cakes — which had hardly existed before — got more and more popular. Soon, "Happy Birthday" was a prominent part of the celebration.

But none of these disputes would matter were it just a song we sung to, you know, celebrate peoples' birthdays. Thanks to the beauty of U.S. copyright law, "Happy Birthday" became one of the most profitable songs in existence.

3. It is obscenely expensive to sing "Happy Birthday."

Singing "Happy Birthday" takes maybe 15 seconds, if you sing it slowly. But a stroke of greedy brilliance led the Warner/Chappell music publishing company to purchase the song's copyrights for a (supposedly) cool $25 million in 1988. That's when everything changed: ''From our point of view it was a very good investment,'' then-Executive Vice President Jay Morgenstern said.

Now any time the song appears in a film or TV show, it costs upwards of $10,000, earning Warner/Chappell $2 million dollars a year.

Not a bad purchase, in retrospect.

"Happy Birthday" was also responsible for the creation of Birch Tree Group Limited, a company whose sole purpose was originally to protect the song's copyright.

These days, Warner/Chappell isn't especially shy about enforcing its ownership either: If you use the song in a TV show without permission, you get a hefty fine. Simple as that.

But even singing it to your coworker in a nice big office is technically breaking the law. Some chain restaurants have developed their own versions of the song, just to avoid paying crazy fines every time somebody celebrates their birthday at Olive Garden.

In short, "Happy Birthday" is like the school bully of the music business.

5. As a result, the comedy world mocks the song mercilessly.

Getting clearance to sing the song, then, is sort of like getting clearance to walk around Fort Knox feeling the gold. As a result, some of our more inspired musicians and comedians have taken to mocking the rights issues or even creating their own versions.

30 Rock, Community, Futurama and the glorious Stephen Colbert have all participated in undermining the stringent laws. Colbert managed to actually sing the lyrics to the tune of the American National Anthem, which is surprisingly hard to do.

Meanwhile, for their part, The Beatles and Stevie Wonder have given us much better birthday songs to sing anyway.

6. The copyright will continue making tons of money for a long time.

Warner/Chappell claims their copyright will last until 2030 — 2016 in Europe — meaning they'll make upwards of $10,000 per appearance in a film or TV show. This will earn them about $2 million dollars a year for at least 16 more years.

7. Some people are fighting the man.

In 2013, documentary filmmaker Jennifer Nelson filed a lawsuit against the company, claiming the copyright had expired and Warner/Chappell has been charging exorbitant fees for a song that's already in the public domain.

George Washington University law professor Robert Brauneis agrees, and even stated that the song was almost certainly no longer under copyright. But Birch Tree Group Limited heartily disagreed with that statement, which shocked approximately no one.

Either way, the case was dismissed without explanation. And after years of ludicrous copywright battles and wasted legal fees, an explanation would certainly be welcome.

The fact that "Happy Birthday" — one of the happiest, most inoffensive songs of all time — has created this much revenue and trouble for this many people is, quite frankly, insane. An irritated American public deserves to know exactly what's going on.