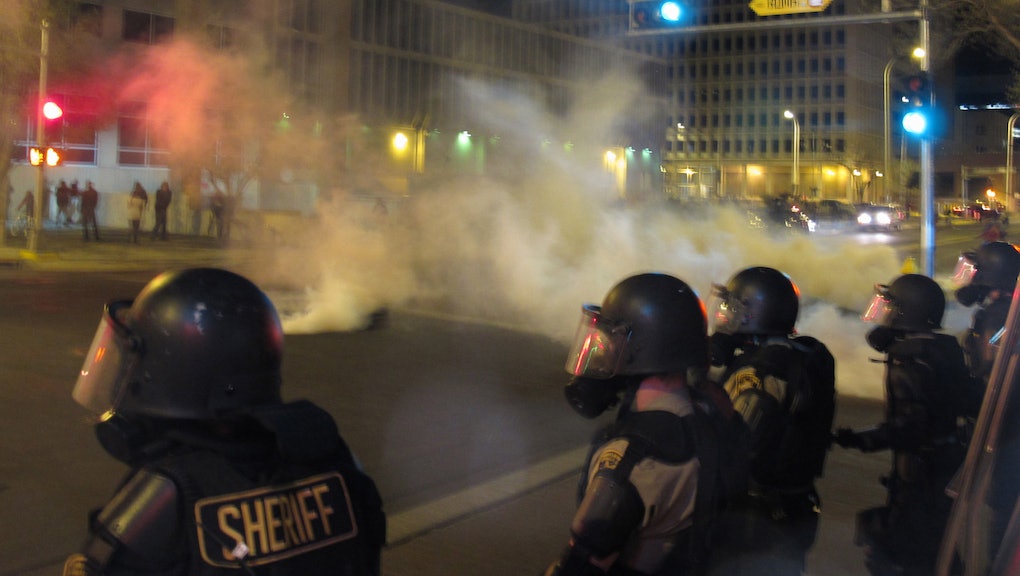 On Sunday, March 16, 38-year-old mentally ill homeless man James Boyd turned his back to Albuquerque police officers after a tense standoff and was shot dead. Captured by a video camera mounted on one of the responding officer's heads, the grisly clip depicts what appears to be the shocking overuse of force by Albuquerque's finest.

Warning: The clip below shows the violent death of a person by firearm.

The city claims the officers acted in justifiable self-defense. But to outside observers, it looks a lot more like brutality — an utterly unnecessary escalation of force at best and an extra-judicial execution at worst.

But wait, there's more: A single video only tells us so much, and what might ultimately be more damning are statistics that show Albuquerque police officers constantly feel they need to use their guns. The latest shooting is just one part of a deadly pattern. The APD routinely kills more suspects per capita than the NYPD, which serves a metro area 16 times the size of Albuquerque and has 34,000 officers to the APD's 1,000. Since 2010, the APD has been involved in 37 shootings in which 23 people died. Between 2010 and March 2012, the APD was involved in 18 fatal shootings to the NYPD's 22 in the same time period. No officer involved in any of the cases has been prosecuted or even fired, despite a body trail that suggests a department with wildly inappropriate use-of-force.

Even more grotesquely, in 2012 the New York Times reported $500 payments are issued to officers put on paid leave following shooting incidents to cover their stress-related expenses. This was called a de facto "bounty system" by families of the APD's victims.

The Albuquerque Journal has found that APD misconduct has resulted in $24 million in judgments against the city in lawsuits since 2010, a number that seems likely to increase as more suits get resolved and new ones are filed over disputed cases. And the feds are concerned as well. The U.S. Justice Department has been looking into the APD's alleged civil rights violations and excessive use of force for over a year, though it has yet to announce any findings.

Unrest: Demonstrators took to the streets last Tuesday, and on Sunday, protests across the city led to a violent crackdown by the APD. Local filmmaker Jesse Darling told VICE News, "The crowd was generally pretty peaceful and there wasn't too much aggression until a bit later in the evening. Then it turned into more kind of an Occupy crowd, and that's when police started throwing tear gas canisters."

Local novelist Frances Madeson claims, "New Mexico is a small state and the police culture here seems to be growing more paramilitary in nature. Increasingly you see people who defy the police as power figures and are being hurt badly."

"We want our cops to be heroes, and right now, we are terrified of them," one protester said. "We are afraid to ask for help, lest we reach for our cellphones or scratch our chins and be murdered. It is a true fear."