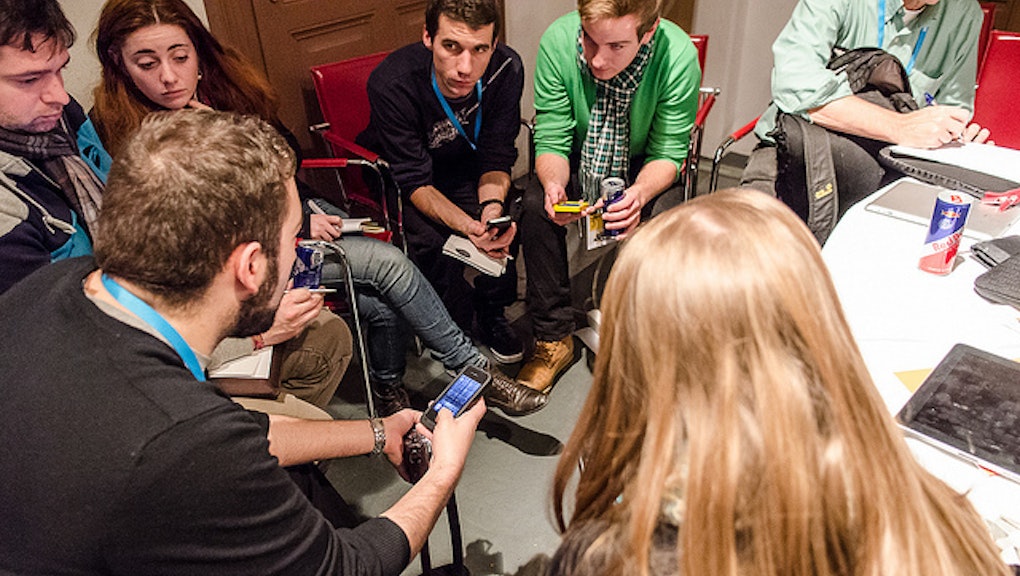 The way people work is fundamentally changing, and it's affecting how companies operate. This change is sparking a major shift in the economy itself. Aaron Hurst, founder of The Taproot Organization, argues that we're moving away from the "Information Economy" and into a new era, the "Purpose Economy," which is also the title of his new book.

In Silicon Valley and other innovation districts around the U.S., entrepreneurs are developing products and services increasingly focused on connectivity with a stronger human element (think Uber, Etsy and OneMedical).

"Right now it's crossing over," Hurst told PolicyMic. "You're seeing an organic start to kick off. Especially through the whole sharing economy, you're basically seeing radical changes of people wanting to have a more human way of interacting."

Young people are at the forefront of this shift, because "they've stood up and demanded meaning and purpose in their work," he said.

For Gen Y, work is more about lifestyle. We value autonomy, creative freedom and flexibility more than anything else. Our careers are a reflection of our identity, and our work has to provide more value than a paycheck. We increasingly want to work for startups and companies like glasses-maker Warby Parker, obstacle course challenge Tough Mudder and Charity:Water, which provide a strong mission and company culture. This ethos is reflected in the popularity of conferences like the Summit Series, TED Talks and SXSW, which connect entrepreneurs and thought leaders around trends and big problems that need to be solved.

It's also important to point out that purpose isn't synonymous with cause. "There are many people who work for 'cause' organizations who aren't psychologically fulfilled," said Hurst, who defines the purpose economy in his book as "the new context and set of ways in which people and organizations are focused on creating value, and it defines the organizing principle for innovation and growth."

Hurst, who is also CEO of Imperative, says that society has evolved to a point where we need even more to fulfill us compared to past generations.

A number of other factors have led to this shift, such as advancements in positive psychology research and the blurring lines between government, companies and nonprofits. Hurst summed it up this way:

"Work has become unstable, decreasingly tied to organizational structures, and the market for labor is now global and increasingly virtual. In some ways, we are becoming de facto freelancers, on our own and navigating great uncertainty in every direction. The instability caused by these major structural changes and magnified by the economic recession brought with it a need to find stability and a future path within ourselves, rather than from an employer."

So what do companies need to do to adapt? Nathaniel Koloc, a co-founder of the nonprofit ReWork, says that today's job candidates most value three things: legacy, mastery and freedom. To attract top talent, companies need to have a mission or a purpose that is game-changing and disruptive. Visionaries like Elon Musk and Jack Dorsey are fundamentally changing the transportation, space travel, and communications and payments industries, respectively.

"While reliable income from working in a traditional company is alluring, for most people, working in the Matrix is not fulfilling," writes Hurst, who also says that even Google's rapid growth "has left many of its employees hungry for purpose." Companies like Automattic, which allows its employees to work anywhere around the globe, are offering people the freedom and flexibility they want, while also operating with a strong mission: to democratize publishing.

With Gallup reporting that 71% of our workforce is disengaged, it helps companies to provide real value and purpose to workers in order to keep them.