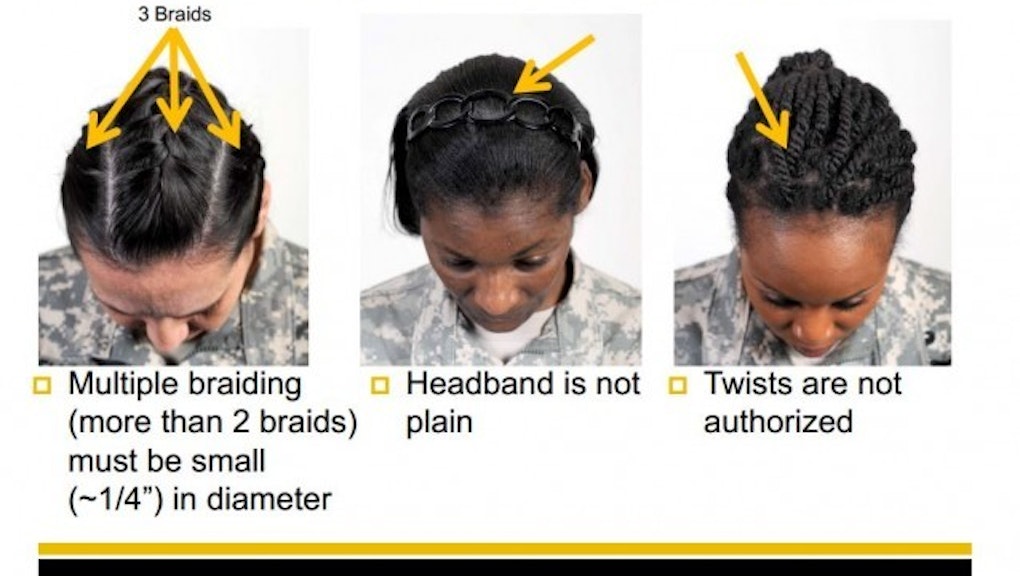 This week in microcosms of America: The U.S. military has banned its personnel from wearing certain hairstyles, sparking controversy among some who claim doing so has marginalized the needs of its black members.

An update to Army Regulation 670-1 now prohibits women from wearing their hair in twists — either against the scalp or free-hanging — or multiple braids that are thicker than a quarter-inch. The new guidelines also stipulate that hair, either when loose or tied up, must not exceed two inches of thickness from the scalp.

Sgt. Jasmine Jacobs of the Georgia National Guard is one of thousands of Army personnel who believe this clampdown on hairstyles is racially biased. She has since started a petition to encourage the government to reconsider these rules and allow professional ethnic hairstyles, saying, "These new changes are racially biased and the lack of regard for ethnic hair is apparent."

The Army's most senior enlisted member, Sgt. Maj. of the Army Raymond F. Chandler III, also posted about the rule change on his Facebook page, prompting hundreds of comments from men and women concerned about the new rules. Many of the commenters noted that the guidelines singled out women with less-than-straight hair.

Staff Sgt. Mary Johnson said the anti-twist regulation "really limits females with curly/kinky hair. I can't simply pull my hair back. ... It makes it very difficult for ethnic females." Shir Levette called it "racial profiling at its best," adding that she will now not be able to wear her hair naturally anymore. "Based upon some of these recent changes it leads me to believe the decision makers are not diverse or culturally sensitive," she said. Meanwhile Shanay Jeffreys commented, "I feel like I'm being pressured to have a 'white' appearance. I thought the army was about diversity."

Prejudicial hair policies are not simply an issue in the military . Traditional African-American hairstyles have been seen as unprofessional in the workplace, too, resulting in cornrow bans at business schools, women being fired from their jobs and a major fashion editor declaring Afros in the office "a real no-no" — adding, helpfully, "no offense." In September a 7-year-old switched schools after she was told her cornrows weren't presentable.

These types of rules may be an indication of a much larger problem when it comes to military leadership.

Black representation in the U.S. military — particularly in its higher ranks — is a noticeable problem. In 2009, an official U.S. Army report showed that black people comprised 21% of the enlisted Army but just 13% of Army officers.

Similarly, 2010 figures from the Defense Manpower Data Center revealed that African-Americans constitute just 5.5% of the military's flag officers-generals, admirals and others of rank, while an Associated Press report from 2008 found that only one of the 38 four-star generals or admirals then serving was black. All in all, just 10 black men have ever gained four-star rank, according to Pentagon information, according to the AP. In 2011, Marcia Anderson became the first black woman to receive the U.S. military's second star, making her a major general and the Army's highest-ranking black woman.

In fact, the percentage of black people in the U.S. Army and Marines declined significantly between 1985 and 2009, with black representation in the Air Force and Navy tapering slightly in the last few years as well.

All this goes to show that when the vast majority of people in charge don't represent their constituents, they may not be able to implement the best policies for the people they manage. What may seem like an attempt to increase uniformity to some may in fact lead to an incredible waste of time for the rank and file.

Jacobs, the sergeant who started the original White House petition, told the Army Times that she's "kind of at a loss now with what to do with my hair" and will probably have to start wearing a wig. She added, "Most black women, their hair doesn't grow straight down, it grows out. I'm disappointed to see the Army, rather than inform themselves on how black people wear their hair, they've white-washed it all."