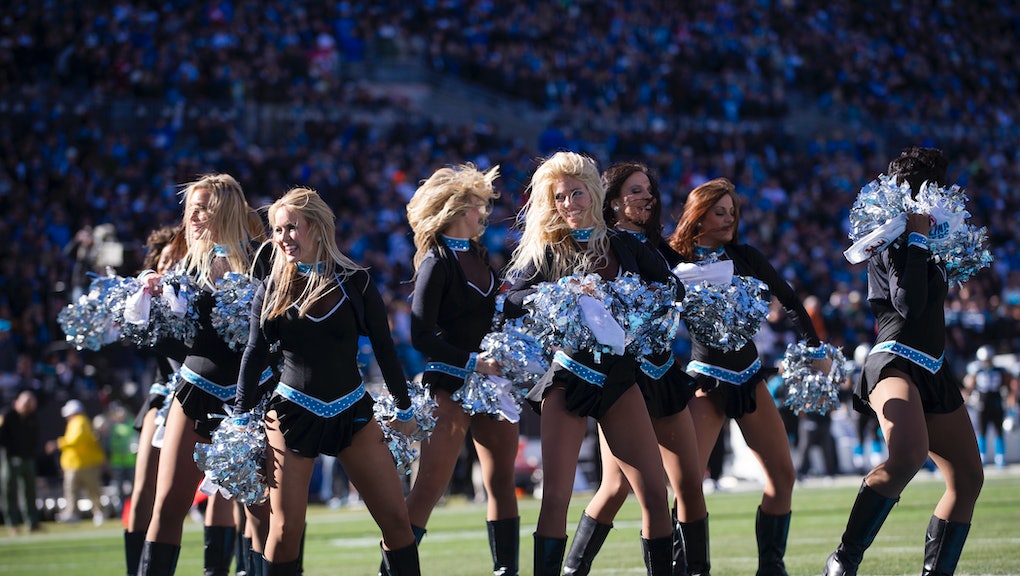 The NFL is the most successful it's ever been. Last season's games were among the highest rated of all time, with Fox reporting a record average of 21.2 million viewers (an 8% increase over the previous year) and CBS reporting 18.7 million, the second-highest number of average viewers in 26 years of broadcasting the regular AFC schedule. Super Bowl XLVIII was not just the most-watched football game in history, but the most-watched thing to ever air on American TV. And despite billing itself as a nonprofit at taxpayer expense, its revenue and salaries are growing ever-higher, with Commissioner Roger Goodell making $44.2 million a year and the league hoping to pull in $25 billion in revenue by 2027.

Yet some of the NFL's hardest-working, most iconic employees barely make $5 an hour, far below the minimum wage and over 50% lower than the Obama administration's proposed minimum wage increase to $10.10. We're not talking athletes, coaches, camera men, snack vendors or even mascots, all of whom make far more. Hell, the mascot might make as much as $65,000.

We're talking about the cheerleaders, who make $1,000-1,500 a month at the absolute most. The vast majority make far less, cheering through two preseason games and eight regular season home games for just $500-750 the entire season by being paid per game ($70-150) instead of by the hour. A lawsuit by the Oakland Raiderettes filed in January and later joined by the Cincinnati Ben-Gals says that NFL cheerleaders are broadly expected to fund their own travel expenses and buy their own team-mandated cosmetics. Their pay is docked if they wear the wrong shade of underwear, bring the wrong pom-poms or dare to sport the wrong shade of fake tan. According to the lawsuit, pay is illegally withheld until the end of the season. A January tell-all by a former Ravens cheerleader on Deadspin revealed that in addition to all this, cheerleaders are essentially treated like pieces of meat, subject arbitrary rule enforcement, constant weigh-ins and mandatory visits to expensive salons (at cheerleader expense). Ravens cheerleaders are even forced to buy $1,200 worth of their own swimsuit catalogues, which they can then resell for up to a $300 profit if and only if they hustle them at signing parties.

Added issues: To top that off, they're practically naked for an audience of millions, and the NFL is planning on letting fans purchase in-seat visits from the cheer squad using a new app. Attendance at practice sessions, charitable appearances and annual swimsuit calendar photoshoots are mandatory, expanding their roles greatly beyond what would be expected for what some are calling essentially a part-time job. In short, they provide a crucial, irreplaceable, profit-generating service for the NFL and are rewarded with compensation that barely covers their expenses. The Cowboys's cheerleading squad alone brings in an estimated $1 million in merchandising and cheerleading-camp revenue, let alone their dancing duties.

Compare that to NFL practice squad members, who never play during an actual game. Over the course of a 16-game season, they make $100,000 or about $6,250 a match. This isn't to say they're lazy or undeserving; the practice squad is an incredibly hardworking component of the team. So are cheerleaders.

Part-time work: Despite this, the U.S. Department of Labor just closed its investigation of the Raiderette lawsuit, saying that since the NFL operates less than seven months a year, cheerleaders aren't subject to the federal minimum wage. Instead, they're "seasonal amusement."

The Raiderette/Ben-Gal lawsuit goes on, with the women on both teams arguing they are subject to state minimum wage laws as well. That alone could have an impact by forcing teams to admit cheerleaders are employees and begin paying them what they're worth.

To be sure, as The Atlantic's Olga Khazan writes, cheering has side benefits. Some go on to lucrative modeling careers, while others go on USO tours or collect fees from appearances. But that's not a replacement for fair labor practices.

"I love the Raiders and I love being a Raiderette," lead plaintiff Lacy T. said. "But someone has to stand up for all of the women of the NFL who work so hard for the fans and the teams."

And their lawyer, Sharon Vinick, says "It's as if the Raiders' owners believe that the laws that protect all workers in California just don't apply to them."

"I have never seen an employment contract with so many illegal provisions."