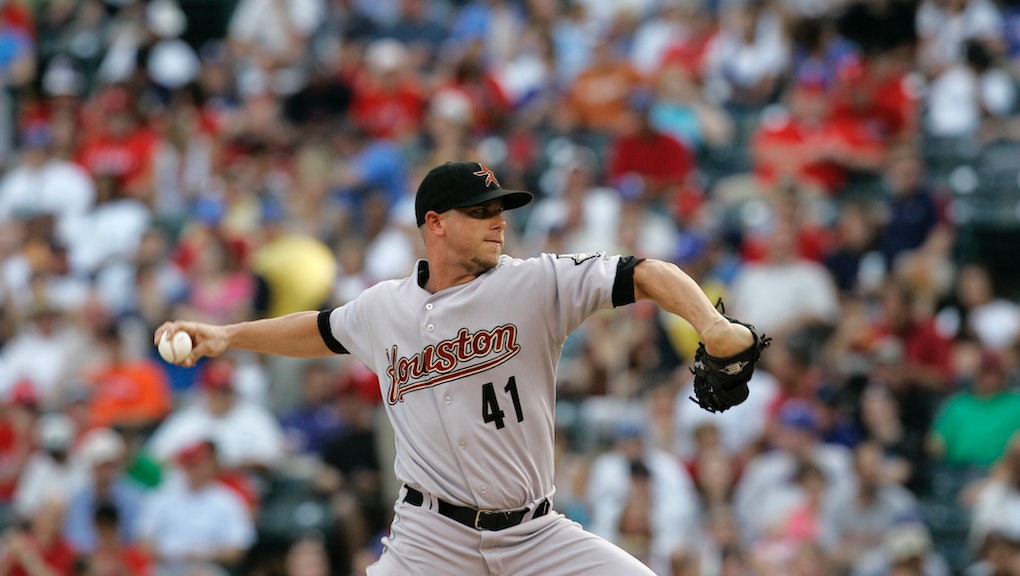 Ex-Houston Astros pitcher Brandon Backe testified in federal court this Tuesday that his precipitous career slump and eventual exit from the MLB was thanks to a brutal beating by Galveston, Texas police officers in October 2008. The Houston Chronicle writes that Backe lost his composure while explaining to the court how the beating mostly incapacitated his right arm for activities like buttoning a shirt, let alone pitching. Backe is seeking $12-15 million in lost wages.

The former pitcher claims that he and 11 other men were the victims of police brutality at a wedding celebration in the city after cops stormed the H20 bar and lounge at San Luis Resort. Backe testified that he personally was thrown to the ground and beaten until his face was bloody after telling an officer that he had no more room to back up and to "chill out."

"I hit the ground hard and they just got on top of me," Backe says, claiming that he severely injured his shoulder on a concrete curb and that Galveston cops continued to strike him on the ground. Mugshot photos taken that night demonstrate he had facial injuries following his arrest. After experiencing persistent pain in his arm, a large piece of bone was removed in one surgery, followed by seven others in another.

The incident: The suit alleges that Cole O'Balle, a minor, was seen in H20's bar area while heading to his room to change. Police say that O'Balle was intoxicated and resisted arrest, leading to what they called a "riot" in which multiple people had to be subdued. The lawsuit paints a different picture. From a 2008 article on KHOU.com:

Family and friends of O'Balle questioned the officer, who called for backup, removed his baton and said he was arresting O'Balle.About 20 officers "swarmed" the bar area and "participated in a vicious attack on members of the wedding party," and bar patrons who were not part of the post-wedding reception, the lawsuit claims.Police are accused of using pepper spray on the plaintiffs and of beating them with batons, kicking them and using stun guns on them.

The lawsuit also alleges that the behavior of Galveston police officers was well known to the city, and that a lack of training and supervision as well as indifference to their regular deployment of excessive force allowed the incident to occur.

There's a history here. In 2010, a draft version of policemisconduct.net's Police Misconduct Statistical Report ranked the Galveston police against all national police departments with between 100 and 499 sworn officers, finding that it had the highest rate of misconduct of all agencies of its approximate size that year. The report estimated an average misconduct rate of 997.98 officers involved in misconduct per 100,000 officers nationally. With 23 reported cases in 2010, Galveston's officer misconduct rate would be 14,935.06 per 100,000 on the same scale, or nearly 15% of the department. The worst 1,000+ officer police department, in New Orleans, had a misconduct rate of 5,041.44. And former Police Chief Charles Wiley himself admitted that the police department used to have a problem with excessive force, saying GPD was "plagued with activities that oftentimes were illegal, most of the time unethical ... Use of force was a 'big issue' within the department itself."