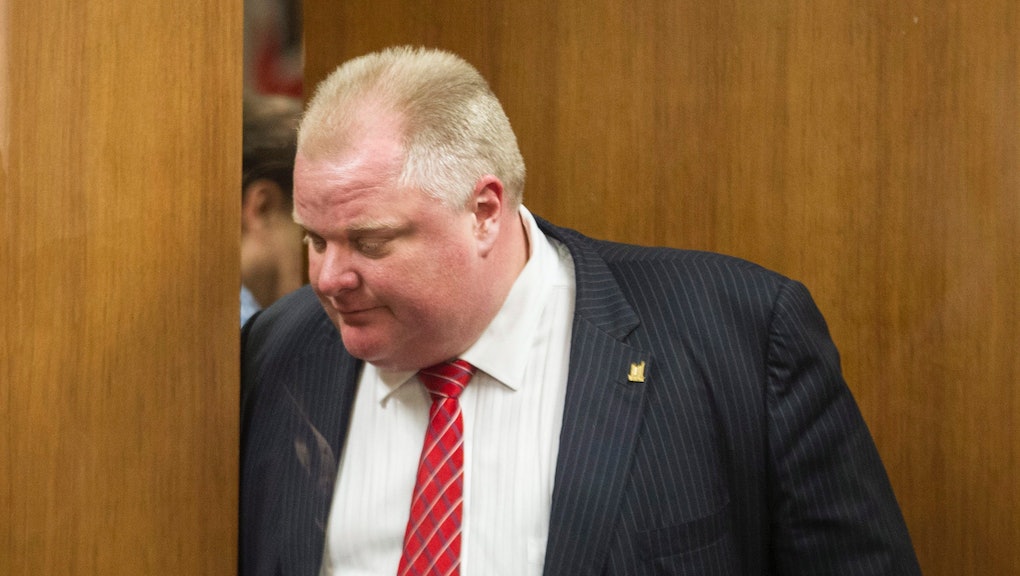 Rob Ford Made One of His Dumbest Political Decisions Ever

Everyone's favorite crack mayor Rob Ford is back in the news, and he's dumping his haterade on some rather unusual targets.

The Toronto City Council held two important, yet uncontroversial votes on Wednesday: one on dedicating a city street to the South African icon Nelson Mandela, and one on congratulating the Canadian athletes who participated in the Olympics and the Paralympics at the 2014 Winter Games in Sochi, Russia. On both motions, the everyone on council voted in the affirmative — everyone except Ford.

"Councillors could be heard gasping when Ford's 'no' votes showed up," reported the Toronto Sun. The worst part? Ford reportedly did not even realize what he was voting against.

The mayor's chief of staff Dan Jacobs brought it to his attention 30 minutes later that, just maybe, he cast the wrong votes. Ford returned to the council chamber to claim, "I voted the wrong way." Some councillors had already left by then, and Ford couldn't fix his votes on the two measures, which both passed 40-1.

Both measures will cost Toronto little to no money: The first will simply add a "Nelson Mandela Way" sign to a street instead of entirely renaming it; the second is nothing more than sending a congratulatory message to Canadian athletes.

"Rob was pretty stupid to vote against this motion in the first place and should have read the motion," Councillor Denzil Minnan-Wong said afterwards.

Others were more skeptical that Ford could have been that out of it. "He votes alone on these things out of disdain and disgust and just out of spite," councillor Josh Matlow said. "He knew exactly what he was doing, at least as much as he often does, and now he is trying to get out of it because he has been caught."

What will happen to next? It's incredible that Ford is still in office, but what's even more remarkable is the fact that he might stay there. The mayor is in the middle of a reelection campaign, and he still has a good chance of winning in October. Current polls place him in dead heat with two of his challengers, and yes, his approval rating is higher than President Barack Obama's.

As for his controversial votes on Wednesday, Ford wants to make clear it was nothing more than a misunderstanding.

"I made a mistake like these councillors do every single council meeting," the mayor said later. "Every single meeting they reopen it. Rob Ford makes a mistake, they don't reopen it."

Yes, he talks about himself in third person sometimes. And for an approximate re-enactment of the vote, here's this: