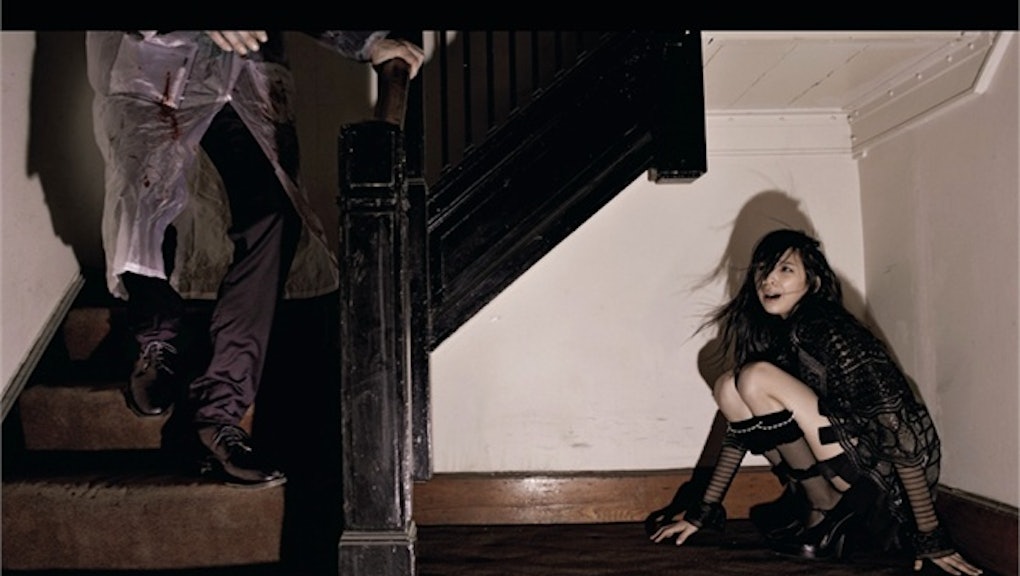 The April edition of Vogue Italia features domestic violence as its cover story, but not everyone is impressed with the glossy magazine's attention-grabbing concept.

Steven Meisel's graphic photographs depict high-end, designer label-wearing models as female victims of physical abuse. One glassy-eyed corpse, clad in red Prada and Alexander Wang, lies with limbs askew and blood gushing through her red hair, while a man sits sinisterly in the dark corner. Other models crouch in terror as men are portrayed creeping down the stairs or tapping on a windowpane, while a women in a white couture coat hides against the wall as an axe-wielding man attempts to break down the door.

The photos are part of a cinematic horror movie shoot, but depicting some of the women as victims of domestic violence was a conscious decision from Vogue Italia's editor Franca Sozzani.

"This is really a horror show, what we are looking at and what we see every day in every newspaper around the world is how fragile the woman still is today, and how she can be attacked, can be abused, can be killed," Sozzani told The Independent.

But critics accused the magazine of glamorizing violence, showing only female victims of domestic violence and painting abuse survivors and women in general as frail and fragile.

Sozzani is no stranger to controversial cover issues, provoking ire with her artistic take on the BP oil spill and her re-interpretation of "slave earrings." But she's also the editor behind the world's first ever high-end fashion magazine to feature only black models, and she put plus-size models on the cover of the June 2011 issue.

In an editorial in this month's Vogue Italia, Features Director Carlo Ducci addresses the concerns head-on. Writing in Italian, he notes the "controversial relationship between fashion publishing and everyday reality," and draws attention to the presumed incompatibility of extreme social situations and fashion publishing. He calls it a "silent psychological embargo."

"Saying STOP violence against women allows us to be in our own way, useful. It supports a message of civilization against barbarism... Those who follow us will be stimulated to act, to denounce, to help women in need," he says.

In an interview with the Independent, Sozzani was similarly determined that there's no good reason why fashion shouldn't address issues like domestic violence.

It's an interesting point, but the problem isn't so much the magazine's proven ability to drum up publicity, as it is the effectiveness of the message that the spread attempts to publicize.

"What part of this is meant to raise awareness about domestic violence," Jezebel's Callie Beusman. "Unlike some of Vogue Italia's other stunts, the 'Cinematic' spread doesn't even seem to have anything to do with the political cause it's exploiting for controversy. It just looks like a homage to horror movies that's happens to be squarely planted in fashion's tradition of using violence against women to seem 'edgy.'"

Noting fashion's propensity to equate violence against women with couture, Beusman adds that if "Sozzani and co. really wanted to send a message and stand with survivors, they could have released a statement declaring that the publication will never again feature editorials that glamorize violence."