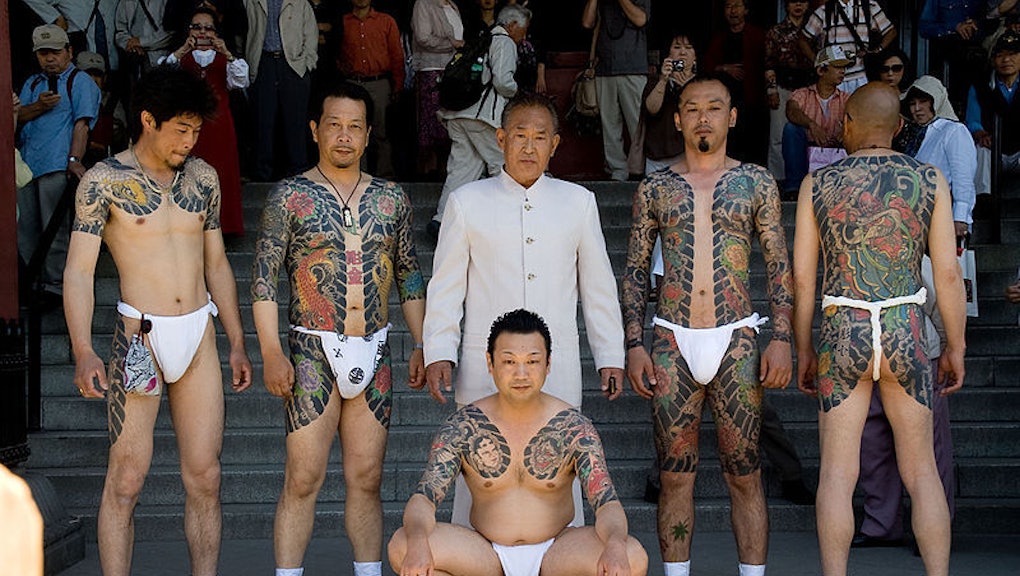 When Dr. Dre proclaimed "things just ain't the same for gangsters," he wasn't talking about the problems facing Japan's biggest criminal organization. But 15 years later, his words seem prescient. With membership at an all-time low, the Yamaguchi-gumi — a major yakuza group — is rebranding to repair its negative image and attract a new generation of future crime lords.

How, you ask? With their new website, a lazily designed throwback to a time when dead space and drab coloring weren't the aesthetic faux pas they are today:

"Banish Drugs and Purify the Nation League," the banner text reads. Below it is a YouTube video showing a group of Yamaguchi-gumi leaders paying tribute at a local shrine earlier this year. It even has a theme song:

The background: The anti-drug message seems strange for a criminal organization, but VICE News reports that the Yamaguchi-gumi disdain drug use and trafficking as "unworthy" of their noble stature. Japan's 20 other yakuza groups tend to agree, gravitating toward "less harmful" ventures like gambling, blackmail, prostitution and racketeering.

Between 1992 and 2010, yakuza membership remained steady at around 80,000, according to the National Police Agency. But stricter laws and police crackdowns have decimated their ranks since, bottoming out at 60,000 this year — a record low. The Kobe-based Yamaguchi-gumi still rolls about 25,600 deep, but that's down from 40,000 in 2008. Still, it remains one of the largest criminal organizations in the world.

Public perception has been a big problem lately. Authorities have successfully painted the yakuza as "an anti-social force" despite the group's once-celebrated place in Japanese culture — at least two monthly fanzines and numerous weekly magazines still exist solely to glorify their exploits. But their dwindling membership has prompted them to re-evaluate, and they're doing so by trying to capture the hearts and minds of the public.

Killing people … with kindness! In addition to the video above, the Yamaguchi-gumi site shows footage of members performing community-oriented tasks, like pounding sticky rice for a New Year festival, and photos of the cleanup efforts they performed after the 2011 tsunami and 1995 Kobe earthquake. According to Jake Adelstein, a writer who spent years reporting on organized crime in Japan, they want to convince people they're now a "humanitarian organization."

But is it working? So far that's unclear.

Local police aren't buying it, RT reports. For them, the site launch and rebranding indicate the Yamaguchi-gumi is expanding its illicit operations. The group is rooted in the eastern city of Kobe, where it was founded in 1915, but maintains a strong presence all over the country and internationally, including Tokyo, parts of east Asia and the United States. In 2012, the group was one of four prominent criminal syndicates to have sanctions imposed on their American-owned assets by the Obama administration. The others? Los Zetas from Mexico, the Brothers' Circle from Russia and the Camora from Italy.

Put simply, these guys aren't playing around. Not even a poorly designed website and heartwarming sing-along rebrand effort can hide that. Time will reveal the Yamaguchi-gumi's true machinations, but for now, let's just kick back and marvel at how batshit crazy the world can be.