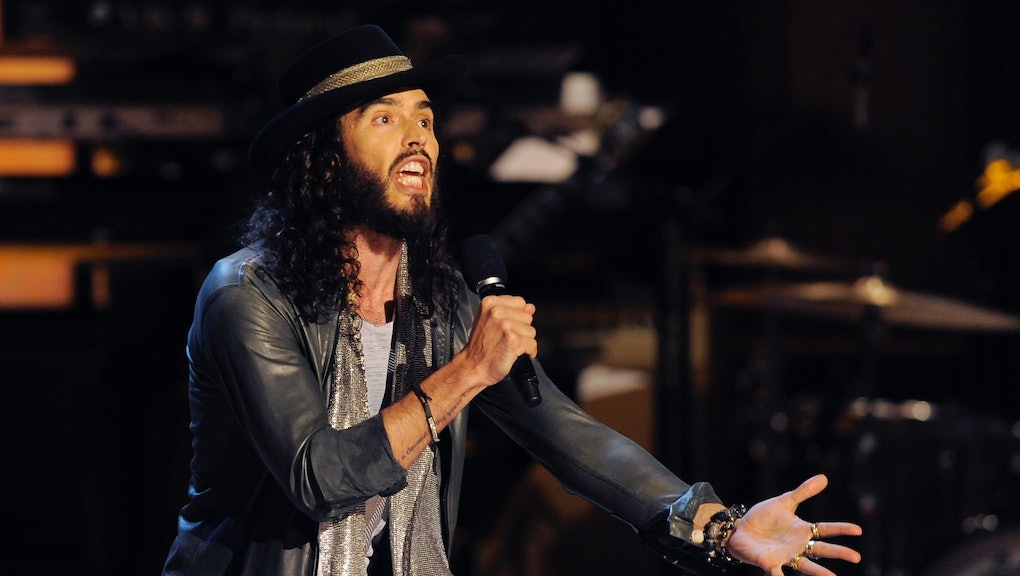 9 Reasons Why Russell Brand Is the Perfect Children's Book Author

Roald Dahl. J. K. Rowling. Neil Gaiman. The U.K. has produced more than its fair share of amazing children's book authors, particularly those who love exploring the nastier side of stories. This week we learned that an unlikely new author would be joining their ranks.

Comedian, actor and occasional Guardian essayist Russell Brand made it known that he was launching his own series of fairy tales, called Russell Brand's Trickster Tales. The first story will be his take on the Pied Piper of Hamelin, and not surprisingly, he's got revolution on the brain. In his words: "Once we start changing the way children see the world, oh, we can do all sorts of stuff."

If all you know about Brand is Get Him to the Greek, his brief stint as Mr. Katy Perry or his previous ventures into publishing (My Booky Wook and Booky Wook 2: This Time It's Personal), you're missing a lot about what makes Brand a brave comedian and a fearless human being. Kids could do a lot worse than learn about the world from a guy with the spine to call out bullshit when he sees it.

Still need convincing? Here are some nuggets of Russell Brand wisdom that will add a dash real, worthy life lessons to any of the children's books he puts to pen.

1. He doesn't let anyone put him down.

Societal norms can make humans behave in totally warped ways, including the kind of rudeness MSNBC hosts exhibited last summer when they had Brand on air to promote his Messiah Complex comedy tour. Pro-tip: Starting off an interview with "He's a really big deal … I'm told this. I'm not very pop cultured, I'm sorry" is kind of a big red flag that you don't take someone seriously.

Kids, don't put up with someone who doesn't take you seriously.

2. He's not afraid to go against the grain.

You probably saw him lunge around in Forgetting Sarah Marshall, but Brand has tackled the Bard too. In Julie Taymor's visually stunning, gender-subverting production of The Tempest, Brand plays Trinculo, the drunkard jester who falls in with Caliban and fails to actually rebel against the wizard Prospera. For the film's special features, Taymor also interviewed Brand in character as Shakespeare himself.

If you have some idea about Shakespeare being for snobs and elites, Brand makes it clear that England's greatest poet is for everybody and that it's awesome to like his work. Kids, don't be afraid to love what you love.

3. He speaks truth to power, especially when it's all in one room.

Maybe you remember something about Brand getting kicked out of the GQ Men of the Year Awards after party last year. That's because as he took the stage, Brand reminded his audience that Hugo Boss, the after-party sponsor, had designed uniforms for the Third Reich. It wasn't a randomly announced fact, though: "Glad to grace the stage where Boris Johnson has just made light of the use of chemical weapons in Syria, meaning that GQ can now stand for 'Genocide Quips," he told the crowd.

Kids, don't be afraid to call out what's wrong.

4. He knows that people who need help also need compassion.

Brand's eulogy for Amy Winehouse shook many people's understanding of him as just another wacky, drug-addled comedian. When Philip Seymour Hoffman overdosed on heroin in February, Brand called us out again for acting like Hoffman's death was his fault and his alone.

Brand understands that it's both cruel and wrong to treat addiction as a moral failing and not a disease. Kids, be kind, for everyone you meet is fighting a harder battle.

5. He gets that apathy is a waste of time.

Brand caught a lot of flack by calling for a political and spiritual revolution while also admitting he doesn't vote. Brand's conclusion, that he was going to focus "on becoming an individual worthy of utopia" in order to help bring about the collective good, is kind of a circular argument, but that doesn't mean it's worth dismissing altogether.

Kids, you're never going to change anything by sitting around and doing, feeling and being nothing except the things you're told.

6. He realizes that you have to be the change.

In February, Brand launched his own YouTube news show, The Trews. It's media criticism at its most basic: Brand reads newspapers and talks about their biases, what they have to sell and how the news is put together. Think what you want about his conclusions, but in a world where the Internet can tell you anything you want to hear, reading with your eyes open is more important than ever. Kids, understand your surroundings.

7. He knows firsthand that people can become better.

Brand has a rocky history with feminism, and while some are skeptical of his announcement that the love of a good woman (his girlfriend, Jemima Khan) has finally changed him, it's still one more public acknowledgement from Brand that life is about evolution. Kids, every day is the opportunity to be better.

Brand has a salacious past, but in his current incarnation, he places primo importance on love.

He has said: "Falling in love is a way of growing up ... You realize you're not the most interesting or most important person in the world. Someone else becomes the focus of your life. You realize what happens to you will affect that other person, and that changes you — fulfills you."

Kids, love is the be-all and end-all, and with it, life will be a lot better for everyone.

9. He is a committed wordsmith and he is having fun.

Brand has a great way with words that will make Trickster Tales that much more fun to read. Check out this preview from the Pied Piper story, and listen to him read it in the video above:

"The clock made its sixth chime. 'Now it's six,' said the glint-eyed piper. A rat that was eating his discarded ham sandwich looked up, fearfully. All the rats paused. The piper silently drew in a long breath through his long nose. The glint-eyed piper knew that each breath we take is borrowed. The glint-eyed piper knew that all things are connected, the clouds, the people, the rats, the pipe, the music. All things are connected by invisible threads. The people of the town didn't know that, for they only cared about things they could see and eat and get prizes for."

A+, Mr. Brand. The first Trickster Tales book comes out this fall.