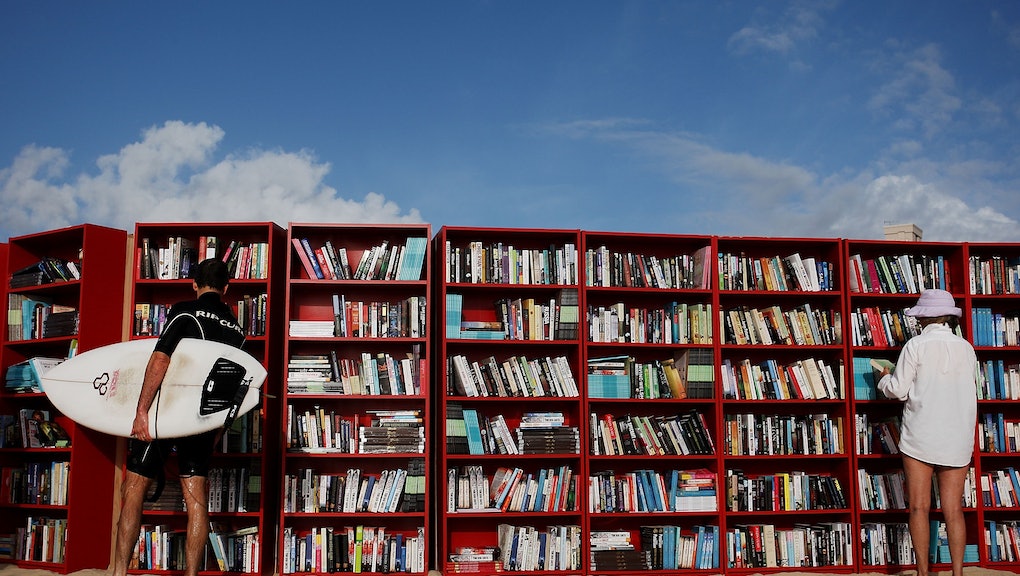 10 Spring Break Reads That Will Actually Make You Smarter

What is a "beach read?" We tend to think of beach reads as books that are light — nothing that demands too much concentration, nothing that ends badly — which is why we so often equate them with fluff. We also often immediately think of novels. But we don't need to limit ourselves. What if the pleasure you want on the beach is from a book to think with? Nothing that requires too much focus, or gets too dark, but a book that will leave you with some substantive brain-food nevertheless? And why shouldn't great essays, nonfiction, humor or plays be as welcome on the beach as a good novel?

Here are some (slightly) intellectual suggestions for beach reading in the coming sunnier days:

Ian Frazier's breezy humor pieces allow you to read in short bursts between reapplying lotion, buying ice cream or getting revenge on the demonic 7-year-old who just deliberately destroyed your sand castle. The very notion of the title essay, which imagines the famous Looney Tunes character suing the company that manufactures the always-faulty products that fail to catch the Roadrunner, provides the best example of Frazier's imaginative verve. But equally memorable are the commencement address delivered by a Satanist college president and the three-way feud between the impressionist painters Monet, Manet and Renoir over the best way to paint Madame Monet.

2. 'The Immediate Experience' by Robert Warshow

Warshow is still the least appreciated of the Partisan Review critics, due in part to his early death. He never published a book in his own lifetime, but the best of his sparkling cultural criticism is collected here. Warshow was the first to write about comics, westerns and Charlie Chaplin in a serious way, and he's the underacknowledged grandfather of all such criticism, from Pauline Kael to Elaine Blair, that's been published since.

3. 'The Particular Sadness of Lemon Cake' by Aimee Bender

Rose finds out at age 9 that she can taste the emotions of whoever has cooked her food. But the novel becomes more than that single fantastic conceit; it's really an deep dive into the nature of emotional sensitivity, and the problems of having an awareness as a child that goes beyond what your able to articulate.

4. 'The First Human' by Ann Gibbons

Why limit "beach reads" to fiction? A few major finds may have cropped up in the eight years since Ann Gibbons published this gripping (trust us) account of paleoanthropological competition and international archeological intrigue, but her smart writing draws out the native curiosity of non-anthropologists about a field in which many people never fully immerse themselves. Gibbons does a great job at guiding readers through a landscape of extinct genera and subspecies, creating a strong sense of the real stakes (and egos) involved in the race fossils in Africa.

5. 'On Chesil Beach' by Ian McEwan

If you're into self-reference, you could read a book about a beach while on a beach. McEwan's novella could easily fill a single sitting of two to three hours. Soaked in an emulsion of nostalgia and disdain for a vanished Britain of the 1950s, it paces through the disastrous results of the sexual reticence of mid-century mores on the lives of an upper-middle class engaged couple on their honeymoon night.

We don't often read plays for fun anymore. But they're the ideal beach reading in many ways: short enough to be read in a single afternoon, and written with a necessary attention to wit and plot. Best of all, you can buy two copies and read with a friend. Shaw's comedy of class and language is one of the things from 100 years ago that's still as funny as it was when it was created. You can finally put to the test Mrs. Pearce's famous admonition that "you can't take up a girl like that as if you were picking up a pebble on a beach."

7. 'Ex Libris: Confessions of a Common Reader' by Anne Fadiman

Let's face it: If you're reading on a beach, you're probably the target audience for this book. Fadiman's collection of erudite essays on book-love includes one titled "Never Do That to a Book," which discusses a range of behaviors that a librarian might glance askance upon: pressing flowers, cracking spines and reading in the tub or over dinner — a good list to contemplate as you try to clear the sand from the gutters of your beach book.

There's a lot of trashy pop psychology floating around out there. But not from Daniel Kahneman, who worked in quiet circumstances for decades conducting seminal research in behavioral cognition at a time when it was still kind of unpopular. His work now undergirds what we call behavioral economics. Here he summarizes his own work with Amos Tversky, as well as that of hundreds of colleagues in the social sciences, using colorful examples and punchy summaries (and real footnotes, for those inclined to follow up more thoroughly.)

These are, admittedly, not easy going topically: They deal with the death of parents, parents' covert homosexuality, the author's own homosexuality, the author's own depression and obsessive-compulsive disorder, psychoanalytic theory and James Joyce's Ulysses. But they are visually rich, a delight to look at and a delight to read, not to mention quick to read too, though you'll keep returning to consider the artwork and layout. They are, like most graphic narratives, best enjoyed in proper daylight.

Imagine hanging out on the beach with Joan Didion, T. S. Eliot, Elizabeth Bishop, Philip Larkin, Saul Bellow and Jorge Luis Borges. Granted, these are probably not people you want to see in a swimsuit competition, but the humor, reflections, pugnacity and eloquence in these minds is surely better than the company of any number of vapid lifeguards. The interviews have always read smoothly but with substance, like an ideal beach drink, and as with margaritas, while all four might be a bit much to bring, one or two will make for a brilliant afternoon.