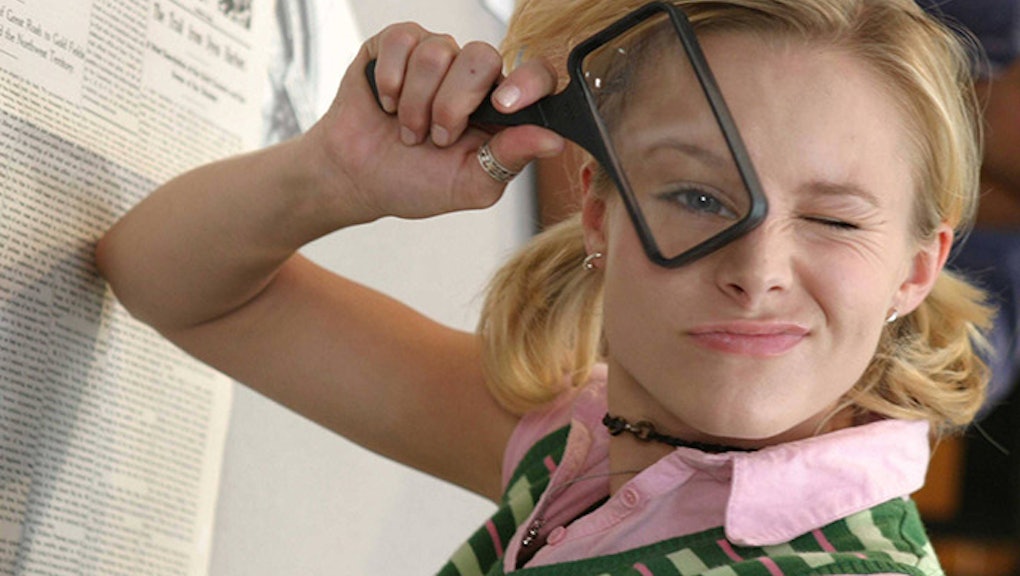 For over a century, readers have been devouring books about the everyday girl detective. A young, white, inoffensive but spunky mystery solver who charms her audience while she solves crime. Nancy Drew, whose name is somewhat synonymous with the genre, is still a cultural icon 85 years after her creation, not to mention a must-read on most middle school lists. But Veronica Mars has swept the first decade and a half of the 21st century and shifted the girl detective formula in a move that may force Drew to hang up her heels.

The Veronica Mars series radically altered the image of the girl detective, a character that Drew popularized and has continued to champion for generations of readers. For starters Mars' first film appearance last month replaced the image of the domestic, restrained girl detective with one of a self-aware, modern woman. It's a character revamp we've needed for a long time.

Over the course of her existence, Mars has dealt with feminist topics, including sexual assault and violence against women. In the third season of the television show, Mars became a rape survivor who refused to be victimized and offended feminists when her views on rape took a bizarre turn. But nonetheless, she hunted down rapists each week on national television a far cry from chasing down stolen clocks. But how did we even get here? What brought us from Nancy Drew to Veronica Mars?

The noir detective story began in the late 1800s, and, from the beginning, it featured problematic female detectives. The first female detective story on record is The Adventures of Susan Hopley, or Circumstantial Evidence. The title was changed to Susan Hopley, or the Adventures of a Maid-Servant to downplay Hopley's mystery-solving capabilities and cast her as a domestic spinster. This seemingly insignificant change started the trend of confining the adventures of female pulp protagonists.

As the 20th century began, the popularity of detective novels for men and women skyrocketed, and a newly literate group of adolescents led to the birth of what we now call young adult literature. The first phase of young adult literature was a wave of "boys' series" produced by the Stratemeyer Syndicate, which featured hi-octane racing heroes like The Motor Boys and Tom Swift. Young girls read the boys' titles from the start, but publishers were not convinced that a girls-only series would be profitable.

Stratemeyer quickly filled this gap in children's literature by publishing the first "girls' series" in 1908, aptly-named Dorothy Dale — Girl of Today. Dorothy Dale was a working girl who managed her father's paper while travelling the globe. At the time, her adventures were revolutionary, although the editors emphasized her sunny and fun-loving disposition to keep Dorothy from becoming too serious. Dale also started the trend of the absent mother in girls' fiction, which has been a constant ever since. Despite the illustrators' attempts to downplay Dale's wanderlust, librarians quickly banned all girls' books (as well as many boys' series) claiming that they appealed to a lowering taste.

Despite the library ban, Dorothy Dale was a quick success, and the series' popularity paved the way for Nancy Drew's girl detective. From the start, Drew was fashioned as young, white, attractive and naive. On the cover of her first book The Secret of the Old Clock, Drew is wide-eyed as she effortlessly carries a clock in a cloche, dress, scarf and heels. She looks like an ad for inoffensive female curiosity.

Initially, Drew's character matched her white-bread appearance. She was, as feminist thinker Bobbie Ann Mason puts it, able to have it "both ways — protected and free. She is an eternal girl, a stage which is a false ideal for women in our time." Like Dorothy Dale and Susan Hopley, Drew was allowed a certain measure of independence — never enough to step on the toes of the men she encountered, but enough to make her seem enticing.

Drew's limited freedom came to life in her relationship with her boyfriend, Ned Nickerson. While her friends Bess and George originally embodied extreme female stereotypes, with Bess as the boy-crazy girly girl and George as the aloof tomboy, Nancy always kept Ned at arm's length. When she faces a potentially sexual situation, a mystery intervenes, she giggles, or she politely protects her purity by turning him down.

Although Drew was the first girl detective, she was soon joined by others also white, teenaged, blonde and skirt-wearing. For the better part of 40 years, the perfectly coiffed girl detective mid-stride was a staple of young adult covers, from Judy Bolton to Carol Duncan.

But behind the stereotypical pulp covers, subtle subversion was reshaping the girl detective. For instance, while one of Drew's defining characteristics had always been her aversion to marriage, Bolton had "all emotions and insecurities of a real girl" as well as "two suitors, struggling lawyer Peter Dobbs and rich architect Arthur Farringdon-Pett." Although this seems a petty love triangle, the presence of two suitors, and the accompanying sexual tension, was rather radical when the series started in 1932. She has also been seen as a better role model than Drew because of her emphasis on relatable emotions and real relationships. Unfortunately, during Bolton's 35-year run, her career path veered between mystery solving and her position as a secretary, which was less than radical in the late 1960s, when the series ended.

Then, in 1964, Harriet the Spy crashed the girl detective party. Instead of modeling the bland manners of a working girl, Harriet swore, stomped and generally acted like a spoiled 11-year-old. She also shed the frilly apparel of a girl detective: Her characteristic androgynous look led to many accusations that she looked like a boy. She was the immature, impolite antidote to Drew's saccharine catchphrases and pencil skirts. She finally taught young girls that it was OK to offend.

If Harriet was the childish Nancy Drew redux, Veronica Mars is the grown-up Nancy Drew. Over her relatively short life, Mars has proven that the girl detective can transform from the nice girl to the mature badass.

Over her decade of existence the TV version of Mars has evolved from a choker-wearing teenager into the film version of a mature, female detective. Early Mars brooded with teenage angst and manipulative cuteness, somewhat reinforcing the feminine ways of earlier girl detectives. In the first season of the show, Mars often pined for her lost mother, reinforcing the daddy-daughter bond that has sustained girls' books since their creation. Mars also looked like a naïve teenage girl. Although her wardrobe was edgy and alternative, she was still a blonde, petite white girl, much like her foremother Nancy Drew.

Now she relies more and more on her fierce resolve instead of her charm and cuteness, which defined earlier girl detectives like Nancy Drew and Trixie Belden, and was occasionally a crutch for a younger Mars. Instead of the show's saucy quips and one-liners, the film features a sobering interior monologue about Mars' addictive personality and need for adrenaline. These are not the "golly gee" expressions or giggles of the first girl detectives, but the reflections of their mature older sister.

In the film, Mars gets even more physical than she did in the show. She punches a former classmate and clubs an armed man over the head. Creator Rob Thomas has stated that the style of the primary brawl scene in the movie was intentionally chaotic and brutal. When the film was in production, he stated, "There will be a lot of grappling and people jumping in and wild punches, but it won't look like ballet. It won't have that sort of every punch choreographed."

And so, Mars has killed the non-offensive girl detective and saved us from another generation of bland teenage girls caged by their measured amounts of freedom — of course it should still be noted that our girl detective is still white, pretty and blond. Still, Mars has grown into an assertive, self-reflective woman, pushing the legacy of the teen crime-solver into new, mature territory. As Thomas has said, "Nancy Drew has had a corner on the market for the last 70 years, I would love if Veronica got next 70."