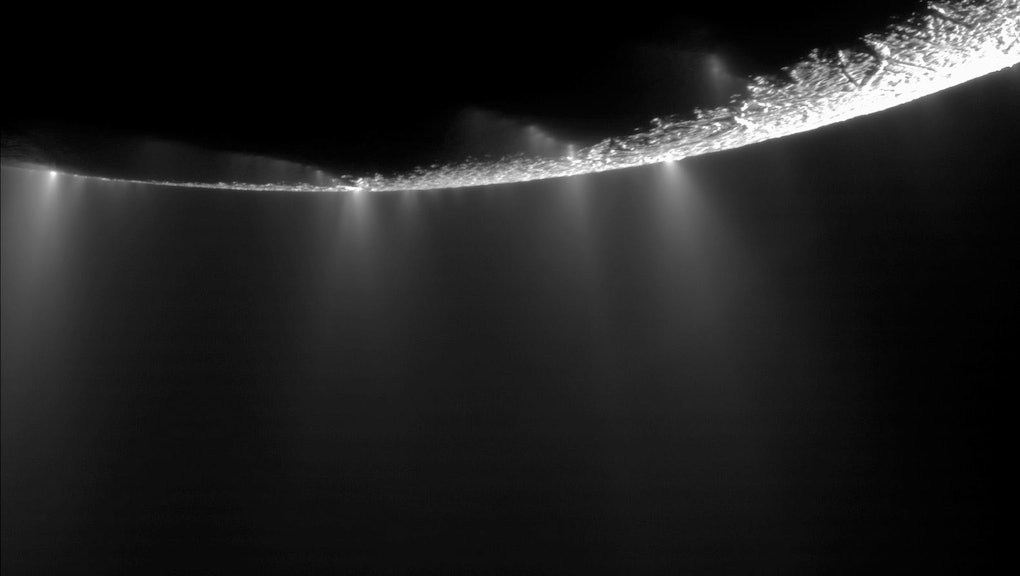 Gravity measurements taken by NASA-ESA's Cassini spacecraft have confirmed that Saturn's tiny 313-mile-wide (504 km) moon Enceladus, long known to have an icy surface, contains a massive sub-surface ocean in its southern latitudes. The analysis of the 2010-2012 measurements has additionally made clear Enceladus is a differentiated celestial body with an icy crust and a rocky inner core composed of silicates — which combined with the presence of liquid water suggests the moon could be even more amenable to life than Jupiter's moon Europa.

While scientists had previously suspected the presence of bodies of liquid water on Enceladus thanks to plumes of H20 vapor shooting out from its south pole photographed in 2005, that water could have been the result of grinding tectonic forces creating friction along plates of ice.

According to the research, the confirmed body of water is about the volume of Lake Superior and is 6 miles deep. It's not directly observable, as it lies under a shell of ice 19-25 miles thick, but its silicate-laden seafloor suggests complex chemical reactions such as those that gave rise to life on earth could be happening in its cold, dark depths.

"The main implication is that there are potentially habitable environments in the solar system in places which are completely unexpected," study lead author and Sapienza University professor Luciano Iess said. "Enceladus has a surface temperature of about minus 180 degrees Celsius [minus 292 degrees Fahrenheit], but under that surface there is liquid water."

How they made this discovery is equally amazing. As Cassini flew by Enceladus, Iess and his colleagues measured how the moon's gravity tugged on the spacecraft as it converted its changes in velocity to changes in radio frequencies observable at Earth-located tracking stations. The system is so precise NASA's Deep Space Network can tell if Cassini slows by one foot per hour. By analyzing the data, the scientists were able to tell that a "negative mass anomaly" located under Enceladus's south pole was affecting the spacecraft's fly-by — an area with less mass than would otherwise be expected given the moon's known composition.

There's a large dent on Enceladus's south pole, so such an effect was expected. But the anomaly was "significantly smaller than expected" based on the 0.6-mile-deep (1 km) dent's size. Scientists concluded that the offset could only be explained by the presence of liquid water.

While the team says current data is only confirmation of water below Enceladus's south pole, it cannot rule out the possibility that it extends globally.

Though the discovery is far from solid evidence that life exists on Enceladus (and the idea that it is even possible on the moon is extremely speculative), scientists say that the number of potentially habitable zones in our own solar system is greater than expected. That's just our solar system, let alone what that implies for the known universe