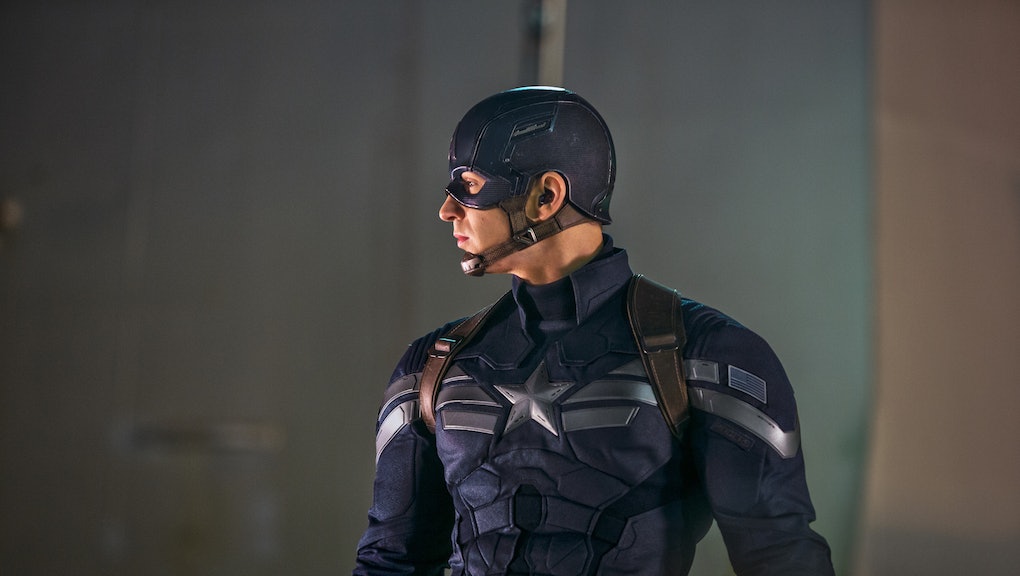 What Superheroes Look Like in 14 Countries Around the World

With Captain America: The Winter Soldier hitting theaters today, fans are once again reminded that Marvel is working hard to try and snatch the mantle of the ultimate American hero from DC's Superman. Captain America is a uniquely American icon with a history that points to politics: The hero's origins stem from World War II, when his scrawny art student alter ego Steve Rogers tries to enlist to fight the Nazis but is turned away. A secret project to create the perfect Allied fighting machine takes Rogers under its wing, and thus a hero is born.

Captain America is the most patriotic of our superheroes (and his brand of patriotism might surprise you), but American pop culture is riddled with iconic characters who rule our box offices and then go on to infiltrate other countries' pop culture as well. That said, Captain America, Superman and the whole U.S.-based team of crime fighters are not the only superheroes the world knows. Many countries have their own superhero icons who just haven't made a splash here in the U.S. We decided to take a peek at 14 other superheroes and comic heroes from around the world, so while America spends its weekend navel-gazing at the movies, at least now we'll know who's defending the rest of the planet.

Born from a classic Hindi movie, Mr. India is one of India's many superheroes. His alter ego is a music teacher with a passion for benevolence and taking care of children. Somewhere in his middle age, thanks to the help of a very special watch, this normal guy turns into the hero Mr. India and saves his country from corrupt bureaucrats, heartless businessmen and the menacing Mogambo. The hero story hits on a whole swath of India's domestic issues, most notably poverty and corruption.

Ultraman is one of Japan's most enduring icons, and is the lovechild of the '60s space race and "kaiju" films like Gojira (Godzilla). In this story, the Science Special Search Party is designed to help the country achieve technological advancement while also dealing with unknown extraterrestrials. When it comes across an enemy alien it has no hope of defeating, courageous team member Shin Hayata transforms into the monster-slaying giant from space known as Ultraman. Possessing tremendous strength and numerous sci-fi abilities like teleportation, flight, self-replication and laser beams, this hero has made an impression worldwide (think Power Rangers). If you want to get political, the image of Japan being attacked by giants and having to rely on intelligence to win is conducive to serious historical analogies.

As the alter ego of secret agent Tom Evans, Captain Canuck is a man of tremendous physical ability, courtesy of some very generous aliens. Because of his courage — plus strength and speed that put Captain America to shame — Captain Canuck is the face of the highest-ranking defense organization in the strongest nation in the world, meaning the way this comic views the future isn’t necessarily the way that the rest of the world views it. As is the tradition with comics, several heroes donned the Canuck mantle before it was placed into retirement, and no one has ripped off Captain America as successfully since.

Yes, it sounds strange to use a real-life pro-wrestler as a superhero. But millions of lucha libre fans didn't mind when Rodolfo Guzman Huerta, known to fans only as Santo, took on zombies, vampires, martians and evil scientists. There was a time when lucha libre was an absolute craze in some parts of the world, and Santo must be lauded for turning that into a movie career, displaying superhuman levels of strength.

Jay-Z, Angelina Jolie and Rush Limbaugh combined are not as big in America as Lee Min-ho is in South Korea. So when this wunderkind abandoned his conglomerate heir image and starred in a politically astute revenge thriller based on a classic Japanese manga, fans tuned in. As a vigilante who tries to avenge the death of his father, Lee Yoon-seong is a vehicle that shows several aspects of modern Korean society, including the generation gap, increasingly diverse roles of women and the labyrinthine politics the public doesn't trust. He has no special powers other than tremendous reflexes and terrific martial arts training, but City Hunter is still South Korea's biggest hero.

A girls' schoolteacher by day, and superhero by night, the Burka Avenger is Pakistan's first animated female superhero. Versed in the fictional art of takht kabbadi, which essentially uses books and pens as deadly projectiles, protagonist Jiya fights people who rail against those performing their duty of educating the youth. Award-winning actress Ainy Jaffri is the voice of Jiya, and despite the fact that there is more strength in this female character than the ones in Mulan and Frozen combined, the show has been criticized for portraying the burqa as a tool of empowerment rather than oppression, proving once again that, be it all-covering or all-showing, a woman simply cannot dress without someone passing sanctimonious judgment.

Hairi (Saiful Apek) is a loser. One day, while living his loser life, he drinks coffee that has been contaminated by a virus-carrying gecko. As a result, he transforms into a bug-eating, wall-crawling mutant. But before he can have fun with his powers, he has to save his city from an evil scientist infecting the population with a virus and then selling the cure. Change some of the wording and the plot to Cicak-man (literally, "Gecko-man") is a near rip-off of Spider-Man, with a bit of the gross-out humor from X-Men’s Toad. One of the most technologically ambitious Malaysian film in recent years, Cicak Man was successful enough to spawn a sequel that furthered his country's arrival onto the superhero scene.

Jet Jungle made his first appearance in the '60s on that most classic of modern storytelling methods, radio. So touched were audiences by this technophile's space adventures that Jet also inspired a popular comic series and has since become a cultural icon. With his nerdy professor sidekick, gorgeous redhead girlfriend and pet tiger, Jet is a walking action tropes catalogue. He doesn't have superpowers, relying more on personal ability and gadgetry a la Batman and Green Hornet, and his space-faring adventures were some of the best escapist fantasies ever inspired by the aforementioned space race fascination of the '60s.

While Steven Spielberg's recent adaptation may have fueled interest in Tintin, many still wouldn't realize the tremendous impact of our young Belgian journalist. Accompanied by his loveable dog Snowy, Tintin goes around the world having adventures that are translated into dozens of languages. The series deftly mixes slapstick humor with intelligent social commentary. Earlier installments are marred by some less-than-ideal portrayals of non-Europeans, which (perhaps predictably) doesn't dent Tintin's status as an international icon of modern entertainment. Perhaps not your most traditional and bionic superhero, Tintin's long-standing relevance has elevated him into the super category.

Super Cholita immediately gets props for being possibly the only plus-sized woman taken seriously as a comic book hero. Couple that with her strong stance against corruption, and Francisca Pizzaro Mamani is truly a champion of the people. Her power of flight, derived from a Tiwanaku temple, and her garb, inspired by Bolivian history, is enough to make her visual design a fairly progressive creation. Unfortunately the series does occasionally treat her weight as a humor device and "cholita" is an undoubtedly questionable term with a dark past behind it. However, just by existing, even in this occasionally regrettable state, Super Cholita does a lot that Americans can really learn from.

In a way, it's fitting that one of China's most successful heroes is somewhat of a foil to American-born Chinese legend Bruce Lee. Whereas Lee was an American who returned to China and found international fame, Wah Ying-hung (literally, "Chinese hero") is a young man who immigrates to America and finds fame on the streets of Chicago. Wah makes friends and becomes a martial arts master, but racism and gang violence forever mar his American dream. Innumerable ethnocentric action stories have thrown Westerners into the East; Wah Ying-hung is perhaps the strongest manifestation of millions of Chinese fans who grew up reading such stories and knew something was wrong.

It may sound a bit ambitious, but Adèle Blanc-Sec may just be the most feminist hero of all time. Cult members, greedy businessmen, bureaucratic nonsense and ever-malleable concepts of "patriotism" are all things tackled by this steampunk tech-wielding crime novelist cum investigative journalist. In a strangely self-aware display of gender in the hero genre, Blanc-Sec's affinity for the wonders of the criminal world does little to mask her cynicism towards all male-centric tropes found in her own medium. The most emphatic proof of her conviction is that her creator cryogenically froze her during the story's World War I period because she simply wouldn't have accepted not being allowed to fight and to work as a nurse. Adèle is like Sherlock Holmes as written by Virginia Woolf, and light years ahead of most American comics.

If comics' tendency to sexualize women flat-out insults female readers, the hyper-masculinity on display hasn't done much for men's sense of self-worth either. Perhaps to counter that, Spain gave the world Pafman, an out-of-shape, inept guy who simply cannot make things right. Alongside his anthropomorphic cat Pafcat, Pafman fights increasingly ridiculous characters, such as a talking chair who meets death by termites. The character breaks the fourth wall, satirizes conventions and is utterly devoid of seriousness. He is to Spain what Deadpool is to America.

While some will undoubtedly prefer Union Jack as a more symbolic British hero, no character so definitively headlines British comics as Alan Moore's classic rebel V, a Guy Fawkes mask-donning anarchist who attempts to bring down the fascist government ruling over a distraught Britain. With the power to turn almost anything into a weapon, computer hacking skills and vast knowledge of history and culture, V is an intellectual protagonist (or perhaps antagonist). There has been much discussion about how the British government's surveillance of its citizens played into Moore's creation, which is often regarded as one of the strongest representations of both anarchy and anarchism. Watch Bane in the Dark Knight Rises as the villain, and then read this to see how differently two authors approach the subject.

What other heroes do you know of from other countries? Sound off in the comments below!