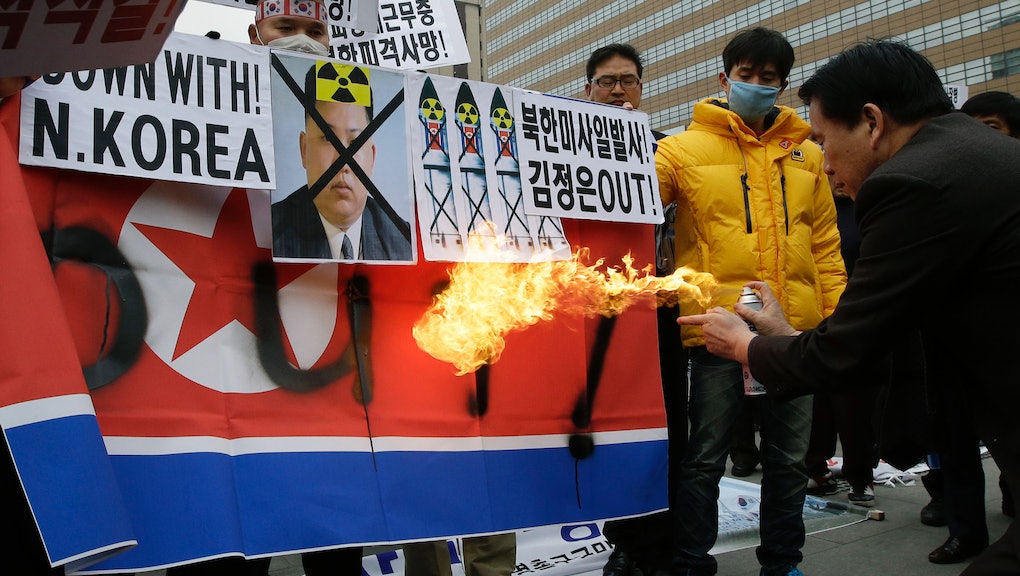 It's been a shaky week in the Korean peninsula, as the two Koreas exchanged non-lethal fire into each other's waters. Regional tension has been heating up since Kim Jong-Un took power in the DPRK, and the escalating rhetoric has accompanied increasing demonstrations of the two countries' military power.

North Korea has had some embarrassing weapons failures in the past, but it's been devoting more and more money to challenge its wealthier neighbor to the south. While some of the weapons are to be expected — nuclear weapons, long-range missiles — a few of them are rather ... strange. But the same can be said for South Korea as well.

Here are six weapons that the North and South Korean militaries are developing in their increasingly surreal gadget brinkmanship:

On Wednesday the South Korean ministry of defense released pictures of what they suspect to be two North Korean drones — if you can call them that. The unmanned aerial vehicles turned out to be model airplanes with cameras inside, and were painted blue to blend in the sky. But they're no laughing matter: the drones managed to fly over the South Korean presidential palace before they crashed.

The North Korean military debuted this accessory last year during the 60th anniversary celebration of the Korean War armistice. While the backpacks were rumored to contain nuclear weapons, experts believe they are more likely to be radiation bombs.

On Monday the South Korean military conducted amphibious exercises with the U.S. troops, and tested out a newfangled gadget: exploding smoke rings. The grenades are supposed to serve as cover for the advancing troops, although they didn't exactly work out. They sure look dramatic though.

This is video games meeting real life: the sensor on Microsoft Kinect is so sensitive that South Korean guards have posted modified Xboxes along the DMZ. The no-man's land serves as a border between the two Koreas, and the new security devices help to tell North Korean guards apart from animals. South Korean engineers are planning on also adapting the Xbox One console, which shows heart rate and body temperature.

While the malware Stuxnet has been used to spy and sabotage Iranian nuclear development, the South Korean cyber-attack strategy has an interesting addendum: propaganda. Not only is it developing programs to target North Korean nuclear facilities, but it is also generating pro-South propaganda to post on North Korean social media and networking sites. The plan is to win over the people and foster dissent.

Nearly every sci-fi movie has taught us that this is a bad idea, but the South Korean military is going ahead with it: a new robot model, developed by Samsung, can identify targets and answer to voice commands. Oh yeah, it's also armed with a machine gun and grenades. Let's just hope these robots don't gain consciousness (which is basically the exact plot that led to The Matrix).