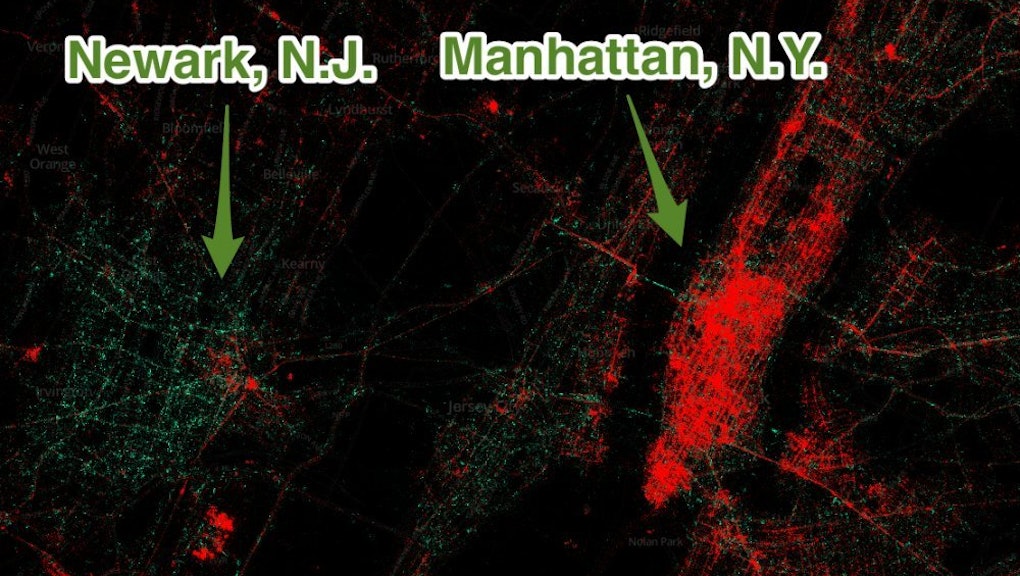 Mesmerizing Maps of Who Owns iPhones Reveal Something Odd: Rich and Poor Neighborhoods

These maps show the location of 280 million individual Twitter posts, and even a basic glance will quickly reveal that tweets from Apple iPhones tend to originate in rich areas like midtown Manhattan, while tweets from Android phones seem to be coming from poorer areas like Newark, New Jersey. Business Insiders's Jim Edwards seems to think this is incredibly depressing and laments that "Android is for poor people with less money."

To some extent, he has a point. Look at this map comparing New York City to Newark:

Or even seemingly bifurcating Manhattan itself across supposed class lines:

Of course, this doesn't necessarily reflect that the people doing the tweeting live near where they're using the phones — for example, these could easily all be tourists visiting the most scenic parts of Manhattan. But the trend seems to extend to other metro areas, like San Francisco:

And even the extremely ritzy Miami Beach:

To reinforce his point, Edwards notes that Apple users spend more in virtually every mobile-related category, from the average amounts shopping on their tablets ($155 for Apple, $110 for Android) to what percentage of visits to e-commerce sites come from each platform (60% Apple, 39% Android).

Rich v. Poor? But it's not necessarily that Android phones are worse or that "Android is for poor people." It's that, as The Wire's Rebecca Greensfield points out, the Android platform offers a little something for everyone (ranging from the admitted cheapos to premium product seekers who dislike Apple), while the iPhone is firmly entrenched in one market niche. That niche just so happens to be a super-premium exclusive aesthetic that retails for a minimum $650 per phone and up. That model has allowed Apple to survive on the margins for a long time, but the jig may be up as the world eats "into Apple's markets faster than Apple is building new markets," writes The Atlantic's Derek Thompson. People in new markets can't afford to pay what Apple is asking, and customers in their existing markets in the U.S. are asking why they're paying such a high premium for Apple products when new competitors are proving themselves able to offer much more for the buck. And since smartphones are now ubiquitous rather than de rigeur, maybe some of the expensive novelty of an Apple product that looks increasingly commonplace next to the rest of the market has worn off.

So while Business Insider argues that Android is for poor people, that's not very accurate. It might just be for people that don't want to spend a few hundred dollars more on an iPhone that's little more than a status symbol — which is probably most of us.

But it might be considerably more accurate to say that until recently, Apple is for rich people. And is that such a surprise? Have you seen what those things cost?