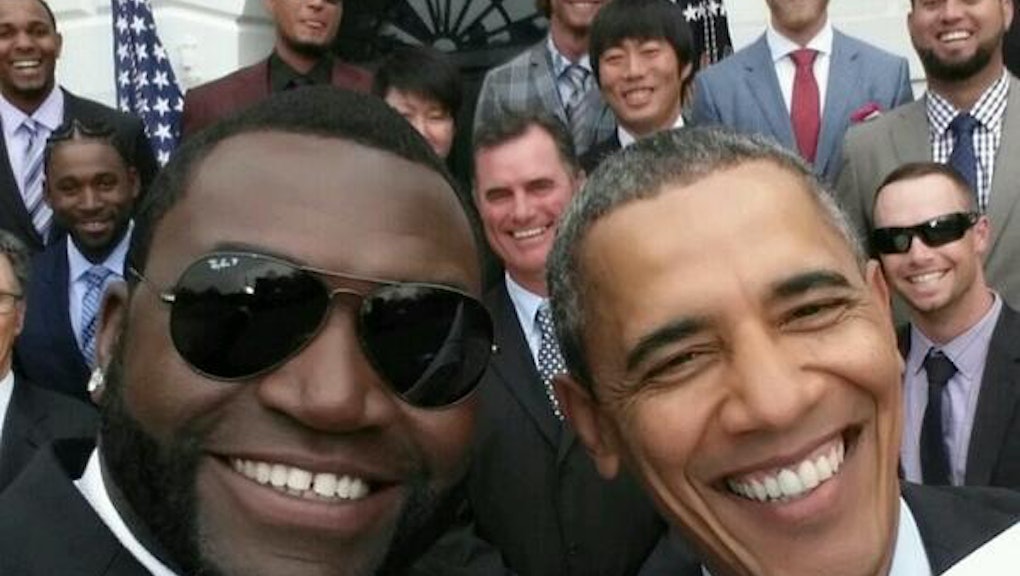 Samsung Has Now Reached 5.5 Million People With Their Selfie Campaign

The latest person to become a part of Samsung's exceptionally successful selfie ad campaign earlier this week wasn't at the Oscars — he was at the White House. President Obama was taking a photo with Boston Red Sox player David Ortiz while being passed an honorary jersey, who subsequently shared it with the world on Twitter. No biggie, except that Ortiz has a promotional contract with Samsung. Uh oh. You can see where this is headed.

Ortiz insists it wasn't deliberate, but yeah right. Unfortunately, it seems as though President Obama is probably the first president to be tricked into starring in an ad — and the White House is not happy about it.

But Samsung is really getting quite good at using star selfie power to promote their line of phones, a trend that started during the Oscars with this now-famous selfie posted by host Ellen DeGeneres:

That photo quickly became the most-shared thing of all time on Twitter led to a massive campaign to take the best selfies, all spurred by the Korean phone-maker's clever marketers. (In case the first lady feels left out, she's been inadvertently sucked into it by Samsung too.)

The original Ellen selfie now stands at 3.426 million retweets and a little over 2 million favorites, while Ortiz's should clock in around 100,000 combined RTs and favs when the whole thing is said and done. That's nothing to scoff at, and the whole thing might be the most successful viral marketing campaign of all time, especially when you consider the millions of people who saw the tweets secondhand. At a minimum, Samsung's generated 5.5 million direct interactions with their branded product (higher if you count other selfies) from these two photos alone.

That said, marketers have to be very careful that they don't break ethical boundaries with these campaigns, and if the Obama-Ortiz selfie didn't cross that line, it's hard to imagine what would. (A selfie of Geraldo Riviera giving away U.S. troop movements? This ambush brought to you by Samsung.) But given the self-aware selfie's proven marketability, you can probably expect to see plenty further staged photos soon.