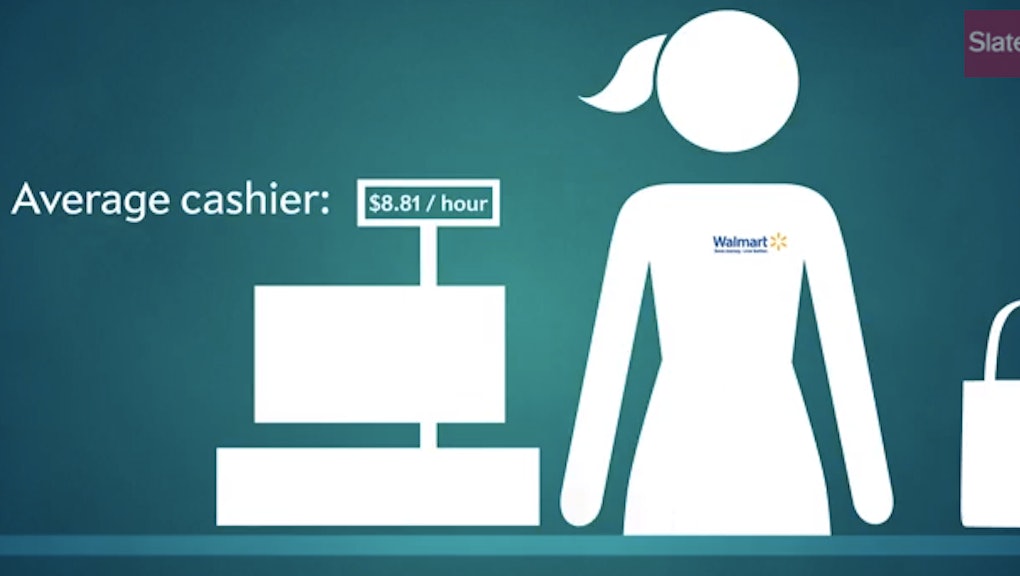 Walmart is the single biggest beneficiary of food stamps in the U.S., as its unbeatable prices help struggling families make ends meet. But Walmart's cost-cutting measures negatively impact one group in particular: its workers. Low wages, inadequate benefits and poor work environments have made Walmart the center of ongoing national criticism. But can Walmart improve conditions for its employees without hiking up its much-welcomed low prices?

According to economists: yes. Most of Walmart's staggering profits — $17 billion in 2013, and $13 billion from food stamps alone — are spent on expanding the company and consolidating its ownership. At the same time, it pays so little that it has become the company with the most employees on food stamps. The reality is all too clear: while Walmart makes billions providing rock-bottom prices to low-income families, it does little to help out its own workers.

Let's look at the facts. So Walmart likes its insane profit margins. How about we let the company keep its money, and instead defer the cost of wage increase to customers?

As Slate found out in its recent investigation, raising employees' wages would have very little effect on Walmart's prices. Watch the Slate video below:

Here is a walk-through of what the report found:

According to Slate's calculations, the average Walmart cashier is only paid $8.81 hour. The low wages have led a sizable chunk of Walmart employees to depend on food stamps — about 40 employees per store.

Food stamps are highly profitable for Walmart: it received around 18% of the $76 billion in food stamps that the government gave out last year.

Around $300 million of that $76 billion goes to Walmart employees, many of whom happen to shop at — you guessed it — Walmart.

So how much would that average Walmart cashier need to paid in order to not qualify for food stamps? Slate says Walmart would need to push up wages to $13.63.

If Walmart made this wage hike for all its employees at Walmart and Sam's Club, it would be pretty pricey:

But again, since Walmart doesn't want to pay that cost, it would be deferred to the consumers — leading to a 1.4% hike in prices.

That means that a box of macaroni and cheese would go from this:

This just makes sense. With just a 1.4% hike in goods across the board, Walmart would be able to ensure a better quality of life for its employees.

But the benefits wouldn't just be limited to Walmart workers. If all Walmart workers got paid enough to not rely on food stamps, that would save the government $300,000,000. The same goes for Medicaid as well. A single Walmart supercenter with 300 employees is estimated to cost taxpayers more than $900,000 every year in public health care. That cost would diminish if the company offered better plans, or if workers earned enough to afford good private plans.

Better wage and conditions also mean Walmart stores won't have to hold canned food drives to feed their own employees.

What will happen next? Aside from wages and benefits, Walmart still has a slew of problems it needs to fix in order to improve working conditions for its workers. Its policy of locking employees in during night shifts and denying emergency care to injured workers is certainly something they can get rid of.

But as the government slashes food stamp programs, a wage hike is more pressing than ever. Walmart has been ambivalent about the federal push for minimum wage increase, but its billionaire owners can certainly make it happen.