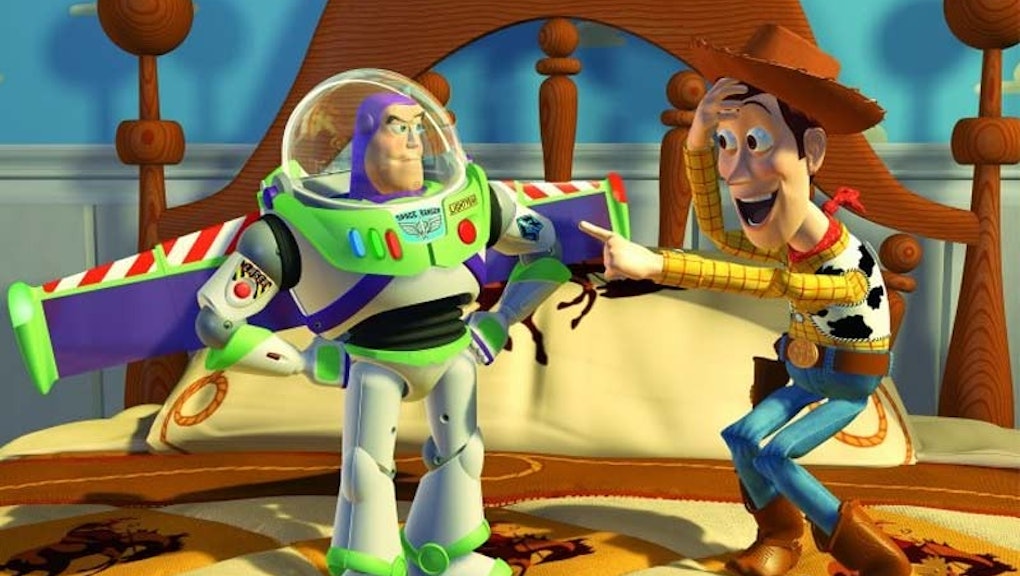 The 10 Secret Ingredients Hidden in Every Pixar Movie

What is it about Pixar movies that makes them so beloved? Across age groups, across continents, audiences pour into theaters to see movies like Toy Story, Up and Finding Nemo — all of which are now firmly in the animated movie pantheon.

Aside from beautiful animation and big name voice actors, there is another massive ingredient that makes these movies as cherished as they are — the stories. Yes Pixar is bold and creative in its plots and characters, but there is an element of familiarity to each of their movies. There's a bit of a Pixar formula at work in their films with some easily spottable tropes present in each of the movies. We took a look at the hidden similarities in Pixar's best picks, but that's definitely not to say that formula is bad. Pixar has figured out the secret sauce and these are their key ingredients. If it ain't broke, don't fix it.

No Pixar movie would be complete without the most necessary of characters: a good sidekick. Shall we argue about which Pixar sidekick wins most adorable? The upbeat, prancing horse Bullseye in Toy Story? The genuine and thoughtful Towmater in Cars? The hilarious Frozone in The Incredibles? I think it's safe to say that Ellen Degeneres as Dory in Finding Nemo takes the cake as the most beloved of all sidekicks.

She speaks whale after all. You can’t top that.

2. A voice we all recognize

John Ratzenberger, while delightful in Cheers, has become a pivotal touchstone in every Pixar film, a familiar anchor that audiences can count on. He has voice acted a role in every Pixar film to date. Ratzenberger played P.T. Flea in A Bug’s Life; Hamm in Toy Story; Yeti, the Abominable Snowman in Monster’s, Inc.; the school of moonfish in Finding Nemo; The Underminer in The Incredibles; Mack the truck in Cars and Cars II; Mustafa the waiter in Ratatouille; John in Wall-E; Tom the construction worker in Up; and Gordon the guard in Brave.

Pixar even saluted his 19-year tenure with them in Cars when Ratzenberger’s character watches a mash up of his own Pixar work. As his character comments, “Wait a minute they're just using the same actor over and over. What kind of cut-rate production is this?”

Everyone loves a grump. Someone who’s a little rough around the edges, but who you know deep down inside is a real softie. Pixar loves its misanthropes and to be honest, these characters truly shine in their complexity and startling humanity.

Consider the widowed adventurer Carl from Up who is the world’s most unexpected hero — a curmudgeon hiding a deep and abiding love. Or the neurotic and selfish Mike Wazowski in Monster’s, Inc., who eventually comes into his own as a brave and generous caregiver (sort of). And of course, the stoic and dangerous EVE in WALL-E who evolves outside of her programming into a complex and devoted friend.

4. A silent but funny type

In the background, tickling our funny bones while never saying a thing, are delightful creatures achieving three stooges-levels of physical comedy. For instance, the triplet masterminds of criminal enterprise in Brave, the ridiculous bird, Kevin, in Up, the acrobatic roly-poly things in A Bugs Life (okay, not silent, but as someone who doesn’t speak Spanish, it was all lost on me), and my personal favorite, the clean-freak robot Burtt in Wall-E. You know, the one with the roller hands hyperventilating at the mud streaks.

While Pixar is definitely competent at creating comedic characters for the whole family, they’re also great at producing the hardened but inspiring mentors that so many of us could use in real life. These characters are critics and occasionally difficult, but they also bring about the best in our hero, and give true praise when its due.

Ratatouille actually has two of these characters: Ego the restaurant critic (voiced by the incomparable Peter O’Toole) and Remy’s hero Auguste Gusteau; each offers their criticism, their advice and eventually their praise. There’s also of course Doc Hudson in Cars and my personal favorite spiritual guru, Crush the turtle in Finding Nemo.

While giant sharks and mythical beasts with violent nicknames are generally not my playmate of choice, Pixar always delivers a happy, lovable softhearted beast. Vegetarian and great white shark Bruce in Finding Nemo, Yeti, the cheery, snow-cone wielding abominable snowman in Monsters, Inc. and if you can remember this far back, Dim, a giant, scary, shy, sweet beetle in A Bugs Life.

We love them all.

Aside from its positive messages and kid-friendly viewing, Pixar’s winning storylines achieve their greatness by dealing with difficult subjects and not condescending to audiences. By not shying away from difficult themes, Pixar gives kids and adults stories that they can really relate to.

For example, the abandonment of Jessie in Toy Story 2 (some theorize by Andy’s mom), the infertility that Carl and his wife are obviously dealing with in Up and even the very bleak, dystopian future of planet Earth in WALL-E.

Pixar (and Disney) love to have cameos for their characters. If you’re a true fan and an observant viewer, you should find the hidden Easter egg every Pixar movie usually features.

Buzz Lightyear shows up in the dentist's office in Finding Nemo; the Pizza Planet truck is seen in Cars, Wall-E and Brave; Boo in Monsters, Inc. has a plastic Nemo; Mrs. PotatoHead reads the tots A Bug’s Life and Doc Hudson is hanging out on the street in The Incredibles.

9. A commitment to going green

Pixar is also a strong supporter of going green and quite a few of their movies feature an environmentalist theme, or at least recognition of the delicate balance between humans and nature.

Of course, Wall-E orbits around the issue of environmentalism, even going so far as to make its setting a ravaged Earth. But don't forget about the energy crisis in Monsters, Inc. which is central to the movement of the plot. Finding Nemo similarly focuses on the impact of humans on the oceans with Nemo’s capture, the danger of motors and boats on marine life and the submerged submarines and leftover (active) mines. Even the setting for Ratatouille is self aware of the impact that large cities have on our environment — there was a lot of trash and a lot of sewage in that movie, just sayin’.

10. An homage to the greats

We can’t claim that art exists within a vacuum. All work has been influenced by other great film, stories, TV shows, characters and pop culture. Pixar is fantastic at recognizing the films and stereotypes that came before their own films, giving wonderful head nods to the genres and people who inspired them.

For instance, Woody’s character and TV show is obviously a spin off of The Long Ranger; Buzz Lightyear references the pioneering Star Wars; Wall-E pays homage to the positivity in Hello Dolly; pretty much every superhero movie is acknowledged in The Incredibles (monologues!) and real, famous race car drivers like Richard Petty were voice actors in Cars. Even in Ratatouille, many believe that Auguste Gusteau (Remy’s hero) was inspired by famed Parisian chef, Bernard Loiseau.

So there you have it. Pixar has figured something out and if they stick with what works we know they'll be making movies we love for years to come.